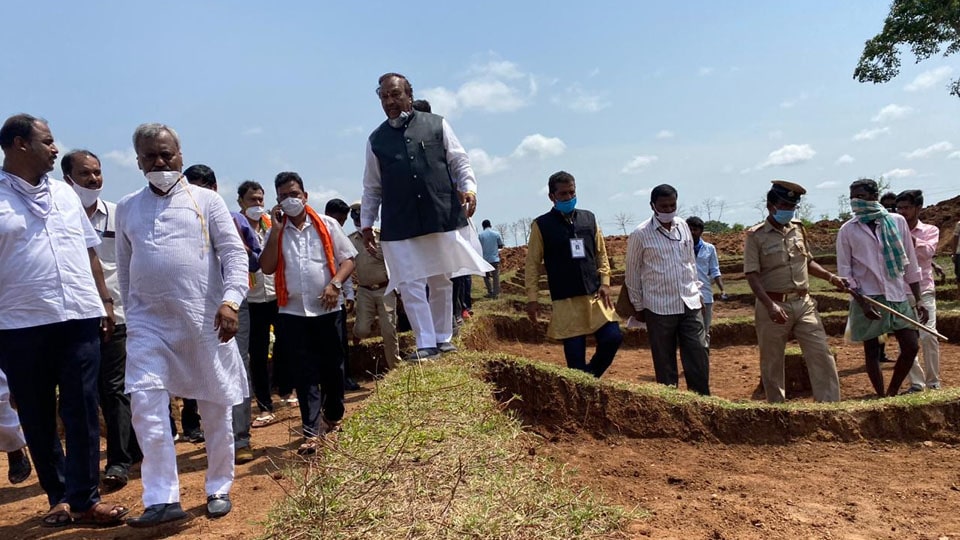 Mysore/Mysuru: “Give more importance to Lakes. Identify Lakes without water in the district and take steps to develop them before the onset monsoon,” said Rural Development and Panchayat Raj (RDPR) Minister K.S. Eshwarappa.

He was addressing a meeting of RDPR Department officials at the Zilla Panchayat (ZP) meeting hall after inspecting various Lakes in the district this morning.

The Minister also collected information about the number of Lakes in the district, number of Lake development works taken up and the number of works completed besides asking the officials to complete the pending works at the earliest.

Pointing out that were 136 Lakes in Mysuru taluk, Eshwarappa asked Mysuru Taluk Executive Officer (EO) Krishna Kumar why only 49 Lake development works were taken up.

The Minister told the officials to also give importance to rain water pits to rejuvenate underground water and asked them to create five pits in each village from May 19 to June 19, which would help the farmers in future.

Eshwarappa instructed the Social Forestry Officer to plan and plant saplings around the pits to sustain rain water.

MP Pratap Simha raised the topic of garbage being dumped on the sides of Outer Ring Road to which Deputy Commissioner (DC) Abhiram G. Sankar asked the ZP and MCC officials to take steps and decide to which dumping yard the garbage has to be dumped scientifically.