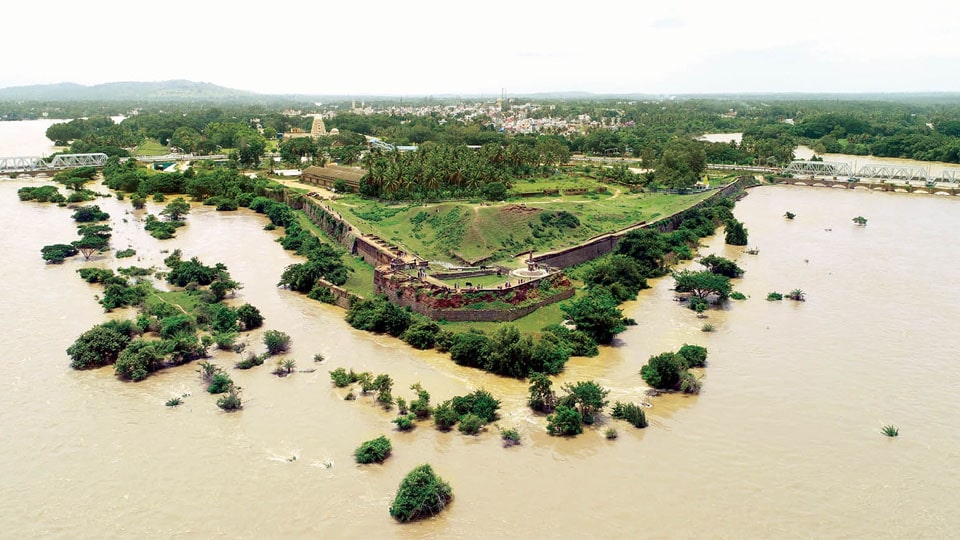 Even as we are going through a very grim and devastating flood situation, we are reading many disturbing reports of tourists being stranded in flooded resorts and home stays. A notable example is of the hundreds of tourists, including a handful of foreigners, who had to be evacuated at great cost and effort from some resorts near Hampi that were affected by the sudden release of water from the Tungabhadra Dam.

It is also reported that the number of stranded tourists who had to actually be rescued was far in excess of the estimates given by the resort operators who had deliberately fudged the figures given to the authorities to cover up their misdeeds. This deception further complicated the rescue operation making things logistically difficult for the Police and the NDRF. In this particular operation helicopters had to be called in to complete the job when the inflatable dingy of the NDRF itself capsized perhaps due to overloading and the choppy waters.

Knowing fully well that these tourist facilities were located bang in the middle of the flood plains of a mighty river it is surprising that the authorities allowed them to remain operational during the peak monsoon season at a time when the waters in the massive dam were lapping its brim. With incessant rains in the catchment areas, it is common knowledge that water may have to be discharged from dams at short or almost no notice in the event of a crisis. That is why people living downstream are always warned well in advance to cease all their farming and agricultural activities and stay clear of the flood prone areas till the all clear is sounded.

Authorities should ensure that these warnings are also heeded by agencies that handle all kinds of tourism activities including adventure sports, hikes and nature treks. All resorts and home stays should be completely shut down all through the vulnerable period so that their guests and staff too are not exposed to any danger whatsoever. Tourists should be warned to stay clear of all unsafe destinations by releasing an advisory through all modes of communication and anyone found violating these guidelines should be penalised harshly. This is particularly essential because some people have a flair for flouting safety guidelines simply for the thrill of confronting danger in its face.

These days the added privilege of being able to flaunt their bravado and dare-devil acts on the social media makes this kind of behaviour very attractive by the instant exposure it offers. It should be understood that floods and all other natural calamities impose a very heavy strain on relief operations when it comes to rescuing and relocating the locals who are affected by them. Any additional burden of rescuing foolhardy tourists too amid the already formidable task will only compound the problem, making things unnecessarily difficult for relief agencies.

With the additional burden that it imposes it may even hamper the complete success of the operations leading to more lives being lost. The operation will require more personnel, more food packets, more relief material like medicines, clothes and blankets and more safe spaces to relocate the affected. The greater the number of people on the scene, greater will be the chaos, confusion and cost too. Yes, all rescue operations are extremely expensive and demanding and most people who only read about them or see their visuals from the comfort of their homes simply do not have the slightest idea of what it takes to organise them. People should therefore understand that they should not add to this already heavy burden by being present where they should not be during times when it is simply not safe to go sight-seeing or holidaying.

The State and Fate of Srirangapatna Fort

Concerns have been voiced in SOM a few days ago about the safety of the historic fort at the island town of Srirangapatna, especially in view of its frequent exposure to flood waters year after year. Incidentally, the panoramic drone shot (see pic. above) of the western tip of the fortress is the first such magnificent view of the place that I have seen. I was so impressed by it that I called up SOM this morning and discovered that Vinay Karekura, the writer of the article, commissioned an agency to get the view for his piece. My congratulations to him and his team!

READ ALSO  Dengue: The Dilemma and the Drama

Although some locals have said that this is the first time that flood waters have risen so high I beg to differ. In the early sixties I have myself seen much higher levels while standing with my dad and maternal grandfather at the edge of the Wellesley Bridge. When I expressed surprise over the way the water was flowing well over the road surface, my grandfather told me that in the late forties he had seen the water flowing well over the parapet of the bridge!

While the views of a few people have been published in the article about the natural forces that threaten the fort, I am of the opinion that the edifice is not so much in danger from natural phenomena as from the natural apathy of man. I say this because I have been observing from the days of my own childhood to the present day that the ramparts of the fort and also many historically important structures in and around it have been the victims of either neglect or simple vandalism. All this has happened simply because we do not have an arrangement in place that prevents tourists from pecking at the ramparts and monuments every time they visit the place or the locals from carting away a few stone slabs when they need to cover up a drain that runs in front of their door steps!

Agencies like the Archaeological Survey of India have only some stipulated monuments whose protection and upkeep they are entrusted with. The rest of the fort is a virtual ‘free for all’ zone.  Unless this too is visibly guarded and protected, very soon there will be nothing much left to protect and perhaps nothing much to see too!