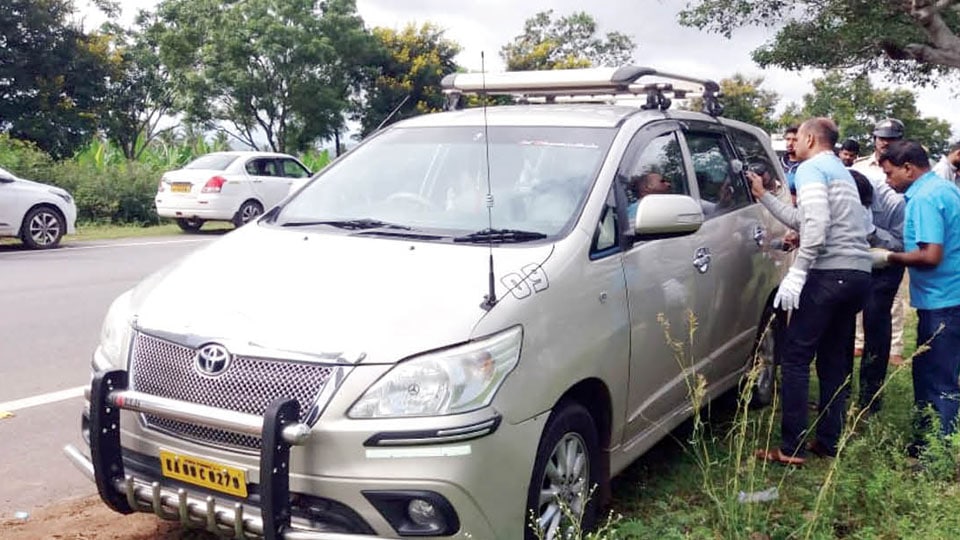 A Familicide is a type of murder or murder-suicide in which a perpetrator kills multiple close family members in quick succession, most often children, relatives, spouse, siblings or parents.

The perpetrator of the grisly crime was under severe debts, forcing him to eliminate his entire family, said Police and family sources. This incident comes just days after Coffee Czar V.G. Siddhartha committed suicide owing to mounting debts. Siddhartha’s death had hit headlines and had brought to fore how debts and societal pressures are forcing investors to take the extreme step.

Last night, he shot his wife Nikhita (28), who was in her eighth month of pregnancy, his son Arya Krishna (4), his father Nagaraja Bhattacharya (70) and mother Hemalatha (56).

The incident took place on the Mysuru-Ooty National Highway 799 at a vacant land near St. John’s School on the outskirts of Gundlupet.

There was an Innova SUV (KA-09-C-0278) parked by the side of the National Highway and the bodies were found 100 metres away from the road.

Family and neighbours told Star of Mysore that Omkar Prasad’s company was under loss and was closed six months back and only last month he had settled the salary dues of the employees. Omkar Prasad is an animation artist and the family has its roots in Chikkaballapura. Omkar Prasad’s wife Nikhita hailed  from Paduvarahalli.

Omkar Prasad had told his friends that he would make an animation series of Ramayana and Mahabharata and had left his Dattagalli home one week back. Equipped with cameras and shooting equipment, they went to Bandipur Tiger Reserve four days back in an Innova that Omkar Prasad hired from his friend Chethan. After staying in Bandipur, they went to a farm house at Yelchetti on the fringes of Bandipur.

Yesterday they returned to Gundlupet and booked rooms at Green Valley Nandi Lodge, opposite Government ITI College. The family stayed inside their rooms till 4 pm and ventured out later, after informing the hotel staff. They returned after dinner. Lodge employees told the Police that after midnight, the five-member family went out of the lodge and Omkar Prasad drove the Innova. They had left the driver behind who was sleeping in the lodge room.

After driving to the outskirts of Gundlupet, Omkar Prasad shot his family with a .32 calibre pistol. Chamarajanagar Superintendent of Police H.D. Anand Kumar told reporters that examining the crime scene, it looked like Omkar Prasad first shot his parents and four-year-old son. He then trained the gun towards his wife and shot her. Moments later, he opened his mouth and shot himself. Police said that it was an unlicensed pistol and Omkar Prasad had procured it illegally.

Last call to the driver

Before killing his family, Omkar Prasad called the Innova driver from his mobile phone and told him that the vehicle had been parked on the outskirts of Gundlupet near St. Johns School and the vehicle key was in its place in the vehicle. Prasad told the driver that they had hired another vehicle and left Gundlupet.

The driver sensed something amiss and soon after Omkar Prasad’s call, he went near St. Johns School. He found his vehicle at the place mentioned by Omkar Prasad. Before starting his vehicle, the driver looked around and in the morning daylight, he found people sleeping at a vacant site at a distance of 100 metres from the road.

Suspicious, he went there only to find Omkar Prasad’s family members strewn all over with bullet marks on their heads. The shocked driver informed the Police. In his statement to the Police, the driver said that Omkar Prasad had told him about his mounting debts and all payments would be cleared today (Aug. 16).

The Gravity Line area near Jodi Bevina Mara at Dattagalli is a posh locality where many officials and company owners have their houses. Omkar Prasad’s neighbours said that the family never mingled with them and stayed aloof.

Omkar Prasad’s brother lived abroad. Neighbours said that the family owned an SUV and Omkar Prasad had hired gunmen to protect him. His father Nagaraja Bhattacharya was an astrologer and people in the locality used to consult him for advice. Omkar Prasad’s son Arya Krishna was not admitted to any school and once a neighbour was told by the family that they would migrate abroad soon and would admit the boy at a school there.

Gundlupet Police have booked a case of murder and suicide. The Police will perform post-mortem and hand over the bodies to relatives. Poignant scenes were witnessed near the crime scene as relatives wailed for their loved ones.

Dattagalli Gundlupet
I have apprised PM Modi on flood damages in the State: CM
Flooded Resorts and Foolhardy Tourists