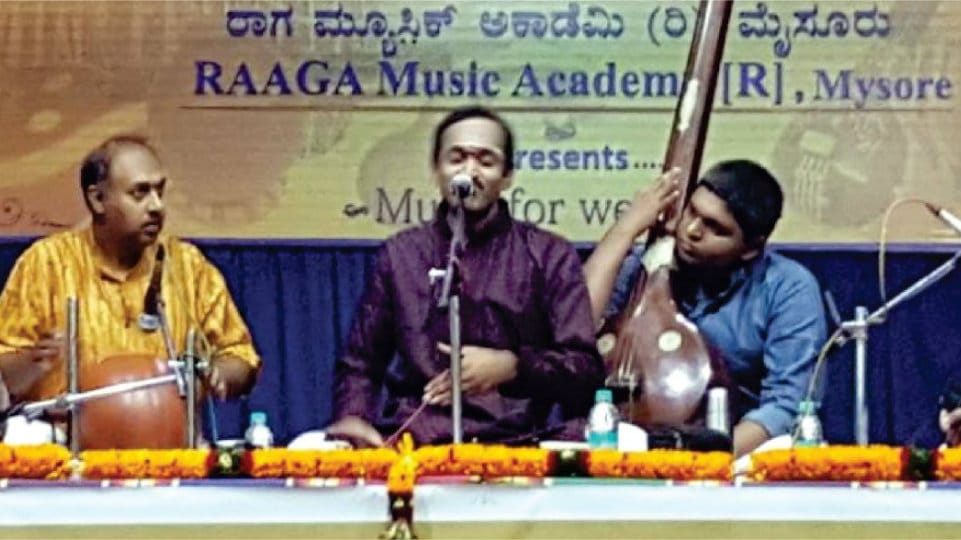 Raaga, an amalgam of music, yoga and Ayurveda held its 50th concert on June 17 at Vasudevacharya Bhavan with pomp and fervour.

Vid. Pattabhirama Pandit, ably groomed by Padma Shri K.V. Narayanaswamy and Padma Narayanaswamy, has developed a unique style of his own. He gives a new dimension to the same old ragas with his true involvement and innovative manodharma in  a robust rendering or expression. His adherence to tradition is unshaken by his new ideas. The perfect grooming has helped him in imbibing all the good qualities of his Guru.

His open throated singing of the age old phrases were more structured and rigorous, reminding one of his Guru’s singing. Mathur Srinidhi was equally competent and melodious.

Yet another gem of Tyagaraja ‘Maa Janakichattabattaga’ was vibrant with bright neraval and kalpanaswaras. He presented a rare Padavarna of Swathi Thirunal in the raga Karnataka Kapi, a rare treat indeed.

Before taking up the main raga of the day, he presented ‘Paridanamicchite’ (Bilahari-PatnamSubramanyaIyer) in a fast tempo and immediately switched over to a leisurely defining the characteristics of Poorvikalyani. With well-defined grammar, emotionally charged, Poorvikalyani reached its pinnacle. The listeners were also carried along with the involvement.

The Krithi, ‘Shree Meenakshimemudam’ acted as the chief vehicle for expressing the beauty and the structure of the raga.

The majestic gait of this vilamabakala Kruthi provided ample of scope for improvisation and encapsulate the raga bhava.

The multitude of sangathis were lively with musical variations. A cascade of Kalpanaswaras after an elaborate neraval, enthralled the rasikas.

Srinidhi too played with total involvement. Sudheendra’s strokes enhanced the musical experience. The taniavartana between him and Raghunandan Vyasarao was brilliant.