Home » News » Following the footsteps of the Gurus… 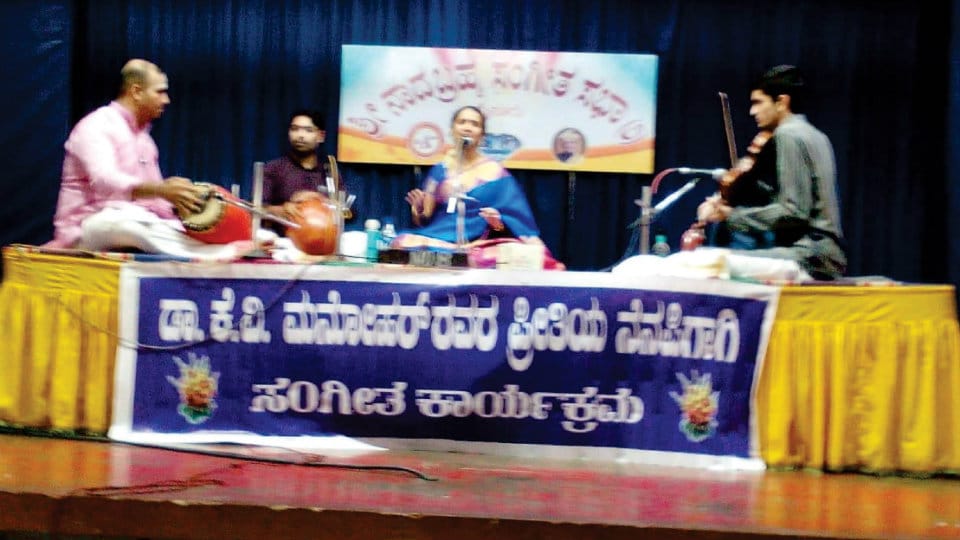 Following the footsteps of the Gurus…

Madhuri Kaushik sang under the aegis of Sri Nadabrahma Sangeetha Sabha, Mysuru, on Aug.12. She was accompanied on violin by Vaibhav Ramani, on mridanga by B.S. Prashanth and on ghata by Vikram Bharadwaj.

Madhuri has learnt music from great gurus like Sukanya Prabhakar, who was present on the occasion and Ranjani and Gayatri. Her stage experience shows in the confidence with which she renders her music.

Take for example her kalpana swaras for Jayachamaraja Wadiyar’s ‘Girija Ramana Nata Jana Sharana’ in Gambheera Nata or the professional manner in which she presented Swati Tirunal’s ‘Krpaya Palaya Showre’ or Madhyamavati which was handled beautifully with all the traditionalism but also with curls and frills. Madhuri’s music reminds one immediately of her other Guru Gayatri, whose style and mannerisms the artiste has adapted fully. This was evident in her rendition of neraval to the Tyagaraja composition in Madhyamavati at ‘Bhamamani Sri Janaki Saumitri’ and also the proficient way in which she rendered her pallavi in Shubha Pantuvarali — ‘Satyanandamayam Sarvam Vishnumayam,’ a line from the pallavi of Muthuswami Deekshitar’s popular composition ‘Sri Satyanarayanam Upasmahe’ in Chaturashra Triputa Tala for which she also developed ragamalika swaras in Arabhi and Sumanasaranjani. The other inclusions in the concert were ‘Amba Neelambari’ in Neelambari by Muthuswami  Deekshitar, ‘Niravadhi Sukhada Nirmala Roopa’ in Ravichandrika by Tyagaraja, ‘Aara Kaluhidane Gelati,’ devaranama ‘Iko Node Ranganathana Putta padava,’ a javali in Kannada and the bhajan ‘Mata Kalika.’ Vaibhav Ramani followed the main artiste faithfully in addition to adding colour in the alapana and the pallavi rendition. Prashanth and Vikram enhanced the aesthetics of the concert.

READ ALSO  An Evening of Melody...

M.R. Sudha sang for Sri Nadabrahma Sangeetha Sabha on the 27th of July. She was accompanied by Charulatha Ramanujam on violin, Anoor Ananta Krishna Sharma on mridanga and Srinidhi on ghata.

Sudha is one of the prominent musicians of Mysuru today. Blessed with a good voice, she has taken care to maintain it with regular and dedicated practice. The occasion being Jayachamaraja Wadiyar’s Vardanthi, Sudha presented a couple of compositions of the Maharaja in the beginning of her concert.

‘Shree Jalandharam Aashrayamyaham’ in Gambhira Nata and ‘Chintayami Jagadamba’ in Hindola were good selections. There was a request towards the end of the concert for a Chamundeshwari Kriti, which Sudha had already fulfilled. Swaras at two places in the pallavi ‘Chintayami’ and ‘Jagadamba’ added colour to the composition both by the vocalist and by the violinist.

Kalyani was elaborate with most of the expected sangatis emerging at proper places with also two grahabhedas — one at ‘ r ,’ bringing out Mohana and the other at ‘ n’ bringing out ‘Shuddha Dhanyasi.’ The composition was Muthuswami Deekshitar’s ‘Bhajare Chitta Balambika,’ wherein Sudha elaborated on the lyrics — ‘Devim Shakti Beejodbhava’ followed by aesthetic swara patterns.

‘Nee Padame gati Nalinakantimati’ in Nalinakanti set to Roopaka tala is a rare composition of G.N. Balasubramanyam, which was a good filler before the main composition of the evening in Bhairavi-Tyagaraja’s ‘Upacharamu,’ which saw a good neraval at ‘Kapata Nataka Sutradharivai,’

Sudha was in company of a talented ensemble in Charulatha on violin, who followed the vocalist with rich bhava, Anoor Ananta Krishna Sharma on mridanga who, as always, encouraged the vocalist throughout the concert in addition to offering a vibrant taniyavartanam with Srinidhi on ghata. The post-tani part included Kanakadasaru’s ‘Yadavaraya’ in ragamalika and a tillana in Revati.