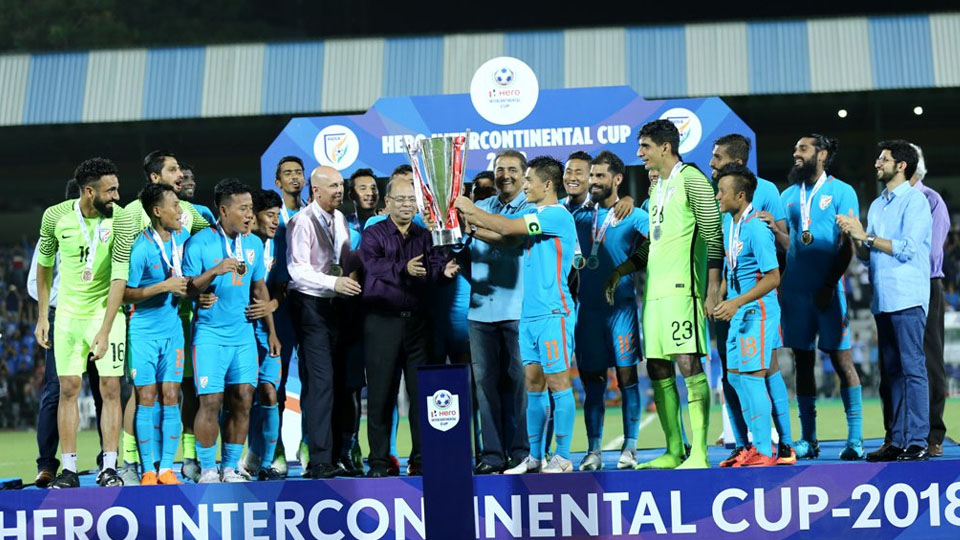 Mumbai: Inspirational Indian captain Sunil Chhetri scored a brace to put himself on par with Lionel Messi and lead the home side to Inter-continental Cup title triumph with a 2-0 win over Kenya in the summit clash here on Sunday.

Playing in his 102nd international match, Chhetri struck in the eighth and 29th minutes to hand a dominant India the trophy to the wild celebration of the home fans at the Mumbai Football Arena here.

The 33-year-old Chhetri’s double strike capped a brilliant tournament which saw him score eight out of India’s 11 goals and put him on par with Argentine superstar Messi with 64 strikes for the country to be the joint second highest international goal scorer among active players.

Chhetri gave India the lead off a set-piece, assisted by Anirudh Thapa. Kenyan defender Bernard Oginga gave away a silly free-kick to India for a high-boot on Chhetri after throw in by Pritam Kotal. The 20-year-old Thapa took the free-kick just outside the box and Chhetri connected the ball into the left-corner of the net. The Indian captain doubled the lead just before the half-hour mark.

Anas Edathodika lofted the ball to Chhetri who controlled the ball nicely on his chest between Kenyan defenders Jockins Atudo and Micheal Kibwage before firing in a low left-footer from inside the box which gave absolutely no chance to keeper Patrick Matasi.