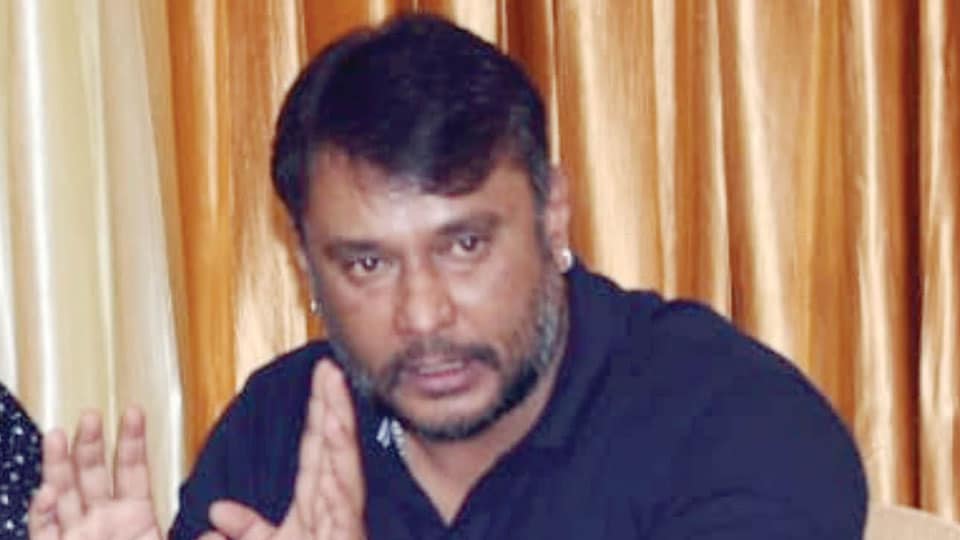 With many twists and turns, the plot is no less than a potboiler

Mysore/Mysuru: A day after it came to light that a case has been booked at Hebbal Police Station for attempt to cheat by obtaining a Rs. 25 crore loan fraudulently by forging the property documents of Sandalwood actor ‘Challenging Star’ Darshan, the actor clarified to the media that his friends were not involved in the racket.

“Different media is portraying my friends as villains. They are not involved in the case in any way and I suspect certain ‘unseen hands’ behind this and the truth will come out in the Police investigation,” he told reporters addressing a press conference at a private hotel here yesterday.

The complaint was filed on July 3 by Harsha Melanta, who is Darshan’s friend and  who runs ‘Mysore Union Club’ at Hebbal, against three persons including Aruna Kumari, a Bengaluru-based woman who claimed to be a Bank Manager, Madhukeshava and Nandeesh. The trio allegedly blackmailed Harsha using forged documents in connection with the attempt to fraudulently obtain a bank loan through the actor’s surety.

Producer of Darshan-starrer ‘Robert’ Umapathi Srinivas also lodged a complaint of cheating at Jayanagar Police Station in Bengaluru. Darshan said the accused, who claimed to represent a bank in Bengaluru, had visited his farmhouse on the outskirts of Mysuru on the pretext of an inspection of the property for the hefty bank loan.

Woman in the role

“The accused claimed that the inspection was for the bank loan sought by my friends including Harsha. Various reports are being published by the media on the alleged role played by my friends and I am here to clarify that they are not involved. Also, what documents Aruna Kumari had with her were just my Aadhaar Card number, date of birth and the information about my property where it was mentioned ‘Darshan Thoogudeepa, Agriculturist’. Apart from these, there were no documents with the woman,” he clarified.

“Unseen hands are behind this and Aruna Kumari could not have mustered the courage to attempt such a fraud without the backing of the ‘unseen hands’. I clarify here that I do not suspect producer Umapathi. I have spoken to him to reveal if he is even victimised by the same ‘unseen hands’. He has asked me for two days to come out with details,” Darshan said.

Darshan released an ‘audio clip’ of the accused woman conversing with him and also a ‘WhatsApp chat’ between her and producer Umapathi Srinivas.

“Though the Police are investigating, I gathered information. Umapathi has to clarify on all this,” he said. “Aruna Kumari first said that she did the con job at the behest of one Mallesh. Next she blamed Umapathi,” Darshan added.

The woman accused in the case is the estranged wife of Kumar, an employee of Harsha Melanta’s hotel. Kumar, who was present at the press conference venue, claimed that he and his wife separated eight years ago and he was not aware of her involvement in the case.

Meanwhile, producer Umapathi told reporters in Bengaluru that only a detailed Police probe will bring out the truth. “I have not attempted to cheat anyone and there is no necessity for me to depend on anyone’s money for a living. I am a businessman and a quarry owner and I pay legal tax and royalty to the Government. Also I am a producer of big-budget movies. I have a good relationship with Darshan,” he said.

On the purported WhatsApp chat between Aruna Kumari and him released by Darshan to the media, he said, “I gave the chat history to Darshan and nothing is established in the chat. I am not involved in any way and let the Police unearth the truth. Also, attempts are being made to foment enmity between me and Darshan,” he added.