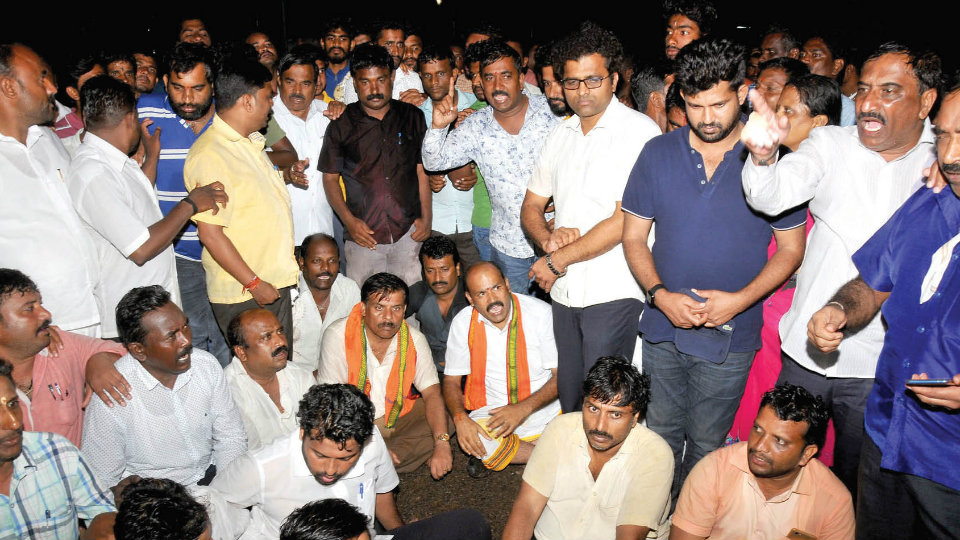 Mysuru: Even as the voting for the MCC elections yesterday, was by and large peaceful, former Mayor Satish (Sandesh Swamy) and a few other BJP leaders and workers were assaulted by a group in Ward 35 coming under Narasimharaja (NR) Assembly segment.

The incident occurred when BJP workers questioned a youth who was moving around suspiciously near a polling booth in Ward 35, at the fag end of voting.

A group of more than 100 persons is said to have assaulted Sandesh Swamy, BJP leader Sandesh, workers Samarth, Charan, Govind, Manju and Prabhu. Four of them who sustained injuries in the assault were admitted to a private hospital. One of the injured, Charan, claimed that the assault happened when BJP workers objected to ex-Corporator Qamaruddin and his associates’ efforts for proxy voting in Ward 35. Qamaruddin also prevented BJP voters from coming to polling booths, Charan alleged and added that the assault took place when voting was to end in about half an hour.

Former Mayor Sandesh Swamy claimed that the group chased BJP workers in a filmy style and assaulted them.

Alleging that the group had been targeting BJP workers for the past one week in the run up to the polls, Swamy said the assault occurred near the polling booth at a Urdu School, when BJP workers questioned attempts of proxy voting. Party worker Sandesh, who objected the group’s plans, was assaulted by the group members, who were armed with sticks and stones. “The group chased our party workers till Triveni Circle and assaulted them. Also some members of the groups snatched gold chains of our party workers in the melee. Later, some members of the public shifted the injured to the hospital,” Swamy said adding that he himself was hit by a stone. 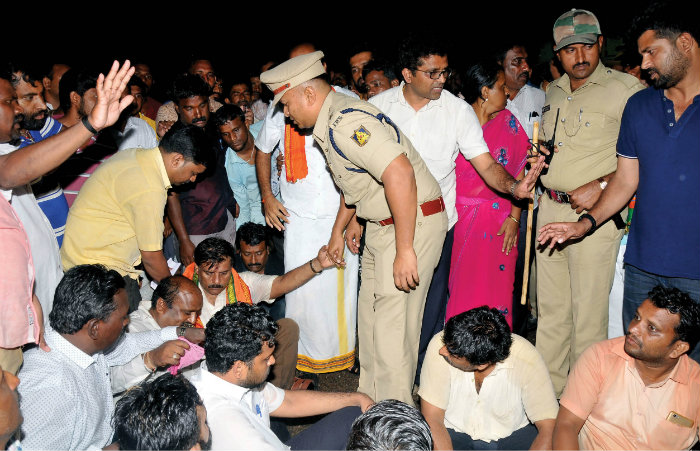 Maintaining that this was not the first such incident, Simha alleged that Tanveer Sait’s close confidant Manjunath, who had lost the MCC polls twice earlier, was behind the incident, as Tanveer Sait wanted Manjunath to win this polls by hook or crook.

Claiming that Tanveer Sait won the last Assembly polls by proxy voting and other electoral malpractices, Simha demanded a fair probe into Friday’s assault on BJP workers and urged the authorities to ensure that such incidents do not occur in future.

Soon after the assault, BJP workers staged a flash protest near Triveni Circle in Kalyanagiri.

Accusing the Congress and SDPI activists of rampant electoral malpractices, the protestors urged the Election Commission to order re-poll in Booth Numbers 366, 367, 364, 365 and 362 of MCC Ward 35.

The protest was withdrawn after DCP Vishnuvardhana visited the spot and assured of action against the culprits after investigation into the incident.

In yet another incident of assault yesterday, S. Mahesh, the Congress candidate from Ward 4 (Byraveshwaranagar) was assaulted by two bike-borne persons last night.

Mahesh was discussing the voting pattern with his associates Ravi and Dinesh at a vacant space in Lokanayakanagar at about 10 pm, when Deepak Gowda and Mallikarjuna, who are said to be JD(S) workers, arrived on a motorcycle and severely assaulted Mahesh who reportedly lost some of his teeth. A complaint has been lodged with the jurisdictional Metagalli Police, seeking legal action against the two for assaulting him.