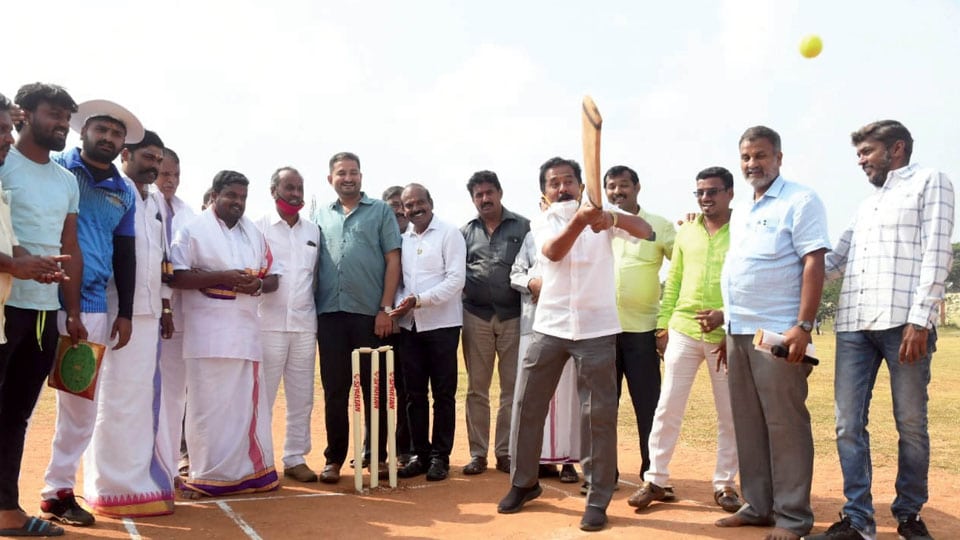 Mysore/Mysuru: Strongly opposing the Government’s move to privatise Muzrai temples, former MLA and Congress leader M.K. Somashekar expressed concern that several vested interests were out to snatch away the livelihood of scores of Shivarchaka priests who were leading life by performing Pujas at temples and Mandirs for generations.

He was speaking after inaugurating the second state-level cricket tournament for Priests and Astrologers organised by Sri Medha Samruddhi Trust at the Railway grounds on Manandavadi Road, Ashokapuram here on Friday.

Pointing out that the Siddharamaiah led Congress Government had raised the Tasthik allowance for priests to Rs.40,000, Somashekar alleged that the current BJP Government is out to privatise Muzrai temples, which is disastrous for the devotees. Stressing on the need to stop the Government from going ahead with such disastrous moves, the former MLA said that privatisation will help only a handful people who will get the powers to have control over the temple assets, properties, jewellery etc.,

He lauded the efforts of Medha Samruddhi Trust for organising the cricket tournament with a purpose of bringing together Priests, and  Astrologers.

A total of 16 teams from Mysuru,Mandya, Hassan and Chamarajanagar districts are taking part in this tournament. The matches fixed for Saturday and Sunday have been postponed to Monday due to COVID induced week-end curfew.