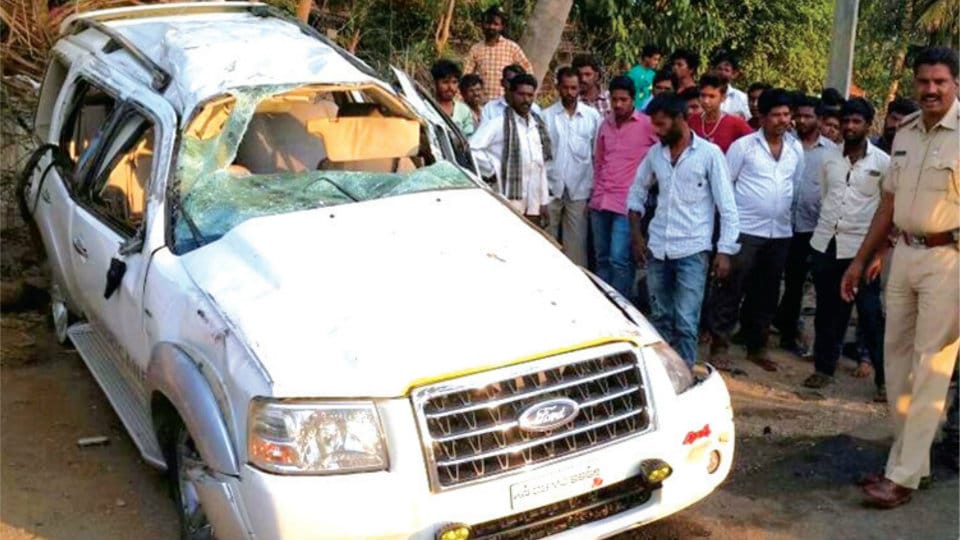 Four from Bengaluru killed in road accident near Hunsur

Four persons from Bengaluru were killed on the spot, while four others sustained injuries, when the SUV they were travelling in toppled near Nellur Pala on Hunsur-Nagarahole road yesterday.

The deceased have been identified as Ranjan Salanke (35), M.S. Ghorpade (33), Kaushik Chavan (32) and Kishore Yadav (25), residents of different localities in Bengaluru.

Two of the seriously injured, who have been identified as Chandrashekar, 33 and Yeshwant Salanke, 38 have been admitted to Apollo BGS Hospital in Mysuru while two others who sustained minor injuries are being treated at a Hunsur Hospital.

A group of eight friends who left Bengaluru in a Ford car (KA-03/MJ 9962) yesterday morning, arrived at the farm house belonging to one of the deceased at Chowdikatte near Ratnapuri Colony in Hunsur taluk at 2 pm.

After inspecting a newly drilled borewell in the farm, the group of friends left the farm for Nagarahole, leaving the driver behind.

As the car headed towards Nagarahole on Hunsur-Nagarahole road, the car went out of control while negotiating a curve near Nellur Pala and toppled. As a result, four persons died and four others sustained injuries.

Hunsur Rural Police who have registered a case in this regard are investigating.

Meanwhile, it is learnt that one of the deceased, Ranjan Salanke’s marriage was fixed for April 30. After distributing wedding cards to his relatives at Chowdikatte and inspecting the newly drilled borewell at his farm near Chowdikatte, Ranjan along with his 7 friends left in the car for Nagarahole, leaving behind the driver at the farm, saying that they would pick him up the next morning.

But fate willed otherwise, as the car met with the mishap, killing the groom Ranjan Salanke and his three friends and injuring four others.