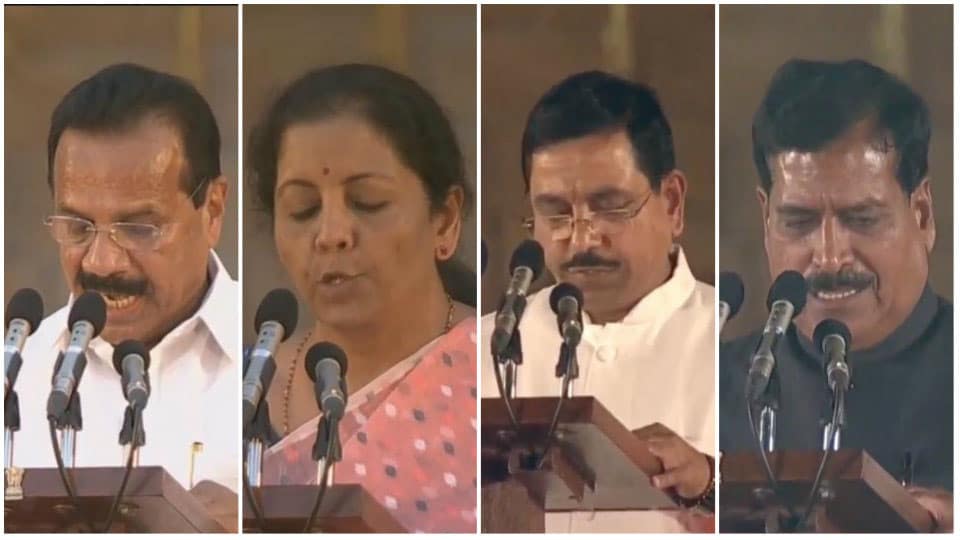 The 66-year-old Vokkaliga leader is the senior-most politician among all the MPs from Karnataka. He has served as the 20th CM as well as State President of the BJP. It was during his tenure as Party President that the BJP came to power in Karnataka, a first in the southern region. A second time MP from Bengaluru North, Gowda was earlier elected as MP from Dakshina Kannada twice. He was born in 1953 to Venkappa Gowda and Kamala in Mandekolu village in Sullia town in Dakshina Kannada. He has served as an MLA twice and as an MLC once besides being elected to the Lok Sabha for the fourth time. He has held the portfolios of Railways, Law and Social Justice, and Statistics and Programme Implementation in the previous Cabinet.

The 59-year-old former BJP National Spokesperson is a native of Tamil Nadu, who has been elected to the Rajya Sabha from Karnataka for the second time. She had been the second woman to hold the Defence portfolio after Indira Gandhi. Before becoming the Defence Minister, she had served as Minister of State for Finance and Corporate Affairs and Minister for Commerce and Industry.

Born on 18th August 1959 in Madurai city of Tamil Nadu, Nirmala Sitharaman joined the BJP in 2006. Prior to joining politics, Sitharaman, a Tamil Brahmin, worked with Price Waterhouse and as an anchor with the BBC World Service. She was also member of the National Commission for Women.

READ ALSO  Doors open to technocrat and those from humble background

He has remained undefeated since 2004. He was the State President of the BJP. He came to fore through the Idgah Maidan controversy (over hoisting a Tricolour in the place meant for Prayers by Muslims) in Hubballi in the early 1990s.  Born into a humble Brahmin family of a Railway employee in 1962 at Vijayapura, Joshi was the third child of late Venkatesh Joshi and Malatibai. Joshi is inducted into the Ministry for the first time by overlooking another Brahmin candidate Anant Kumar Hegde, who was the Minister in the previous Modi Government.

Sixty-four-year-old Suresh Chennabasappa Angadi, a four-time MP from Belgaum LS Constituency, is also an educationist whose institutions offer courses in Commerce, Science, Computer Science, Business Administration and Engineering. He belongs to the dominant Lingayat community, who form the core electoral base of BJP, particularly in North Karnataka. He has always maintained his popularity graph high as he never saw defeat ever since he took a plunge into electoral politics in 2004. Hailing from an agricultural family in K.K. Koppa village near Belagavi, he was born to Somawwa and Channabasappa Angadi in 1953. Suresh Angadi has been credited with turning this one-time Congress bastion into a BJP base.