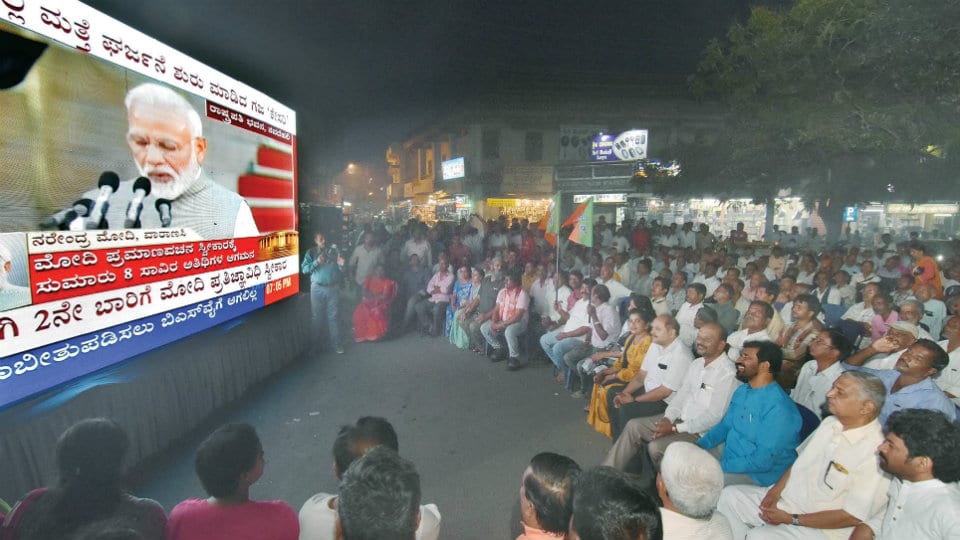 New Delhi / Mysore: Narendra Modi was sworn-in as the Prime Minister of India for the second term last evening after a landslide victory in the 2019 Lok Sabha elections.

With the cream-and-red sandstone dome of the Rashtrapati Bhavan in the backdrop, President Ram Nath Kovind administered the oath of office and secrecy to Narendra Modi and his Council of Ministers.

Speaking to media persons, MLA L. Nagendra said that Mysureans, BJP workers and  others witnessed Modi taking oath as the Prime Minister for the second time. He further said that the citizens of the country have given more support to Modi this time and the whole country is happy about it.

Former Karnataka CM Sadananda Gowda took oath as a Minister for second time, Nagendra said and added the joy would have been doubled if MP Pratap Simha too was made a Minister. After the swearing in ceremony, Nagendra distributed sweets to those present.

At BJP Office: As Modi took oath in Delhi, BJP party workers, who had gathered in large numbers at the BJP Office in Chamarajapuram here, celebrated ‘Vijayothsava.’

The party workers lit earthen lamps which were placed in the shape of a lotus, the BJP party symbol and showered flower petals to the portrait of Mother India. Speaking on the occasion, senior BJP leader H.V. Rajeev said that Modi taking oath as the PM for the second time has made everyone happy.

READ ALSO  Doors open to technocrat and those from humble background

At MLA Ramdas office: BJP party workers, who had gathered in large numbers at the BJP Office in Chamarajapuram too celebrated ‘Vijayothsava.’

Ramdas said that the people of the country, irrespective of religion, caste and creed have supported Modi for the future of the country and added that this is for the first time, a person born after independence was taking oath as Prime Minister for second time.