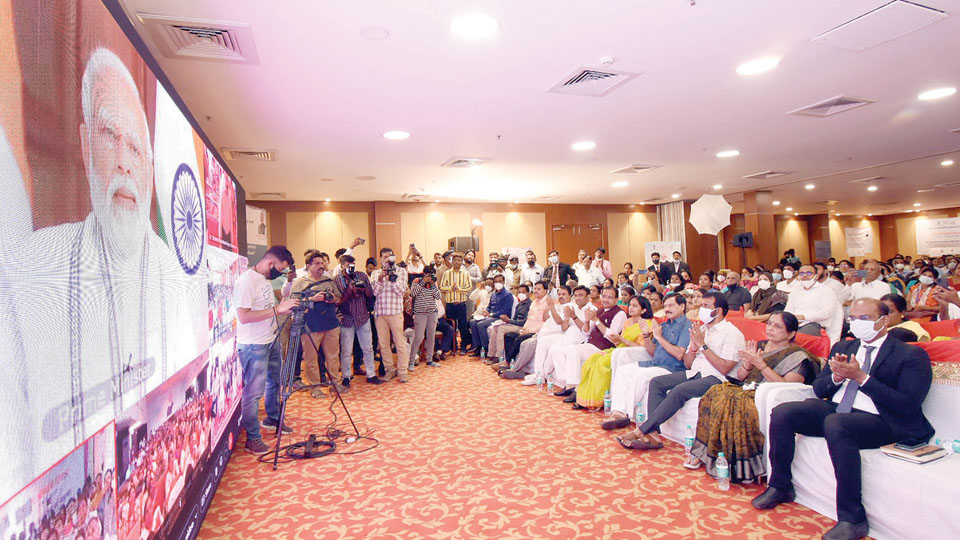 Mysuru is among the seven cities of the country, where the Prime Minister interacted with Jan Aushadhi beneficiaries, Pradhan Mantri Bharatiya Jan Aushadhi Kendra Sanchalaks and Jan Aushadhi Mitras. The other six cities were Patna, Bhubaneswar, Surat, Raipur (Chattisgarh), New Delhi and Chennai.

Jan Aushadhi Diwas was a week-long celebrations that started from Mar. 1, during which Jan Aushadhi Sankalp Padayatras were taken out at 75 locations spread across the country marking the 75th anniversary of Indian Independence.

In Mysuru, the event was held at Hotel Southern Star on Vinoba Road. It was jointly inaugurated by Karnataka Health Minister Dr. K. Sudhakar and Union Minister of State for Chemicals and Fertilizers Bhagwanth Khuba by lighting the lamp.

PM Modi began his interaction through video-conferencing and first spoke to Hilda Anthony, a woman beneficiary from Bihar’s Patna.

Maintaining that from then on she continuously used Jan Aushadhi medicines for her ailments (Diabetes and BP), she said that her health has improved a lot now without side effects.

After hearing her, Modi said that the Jan Aushadhi medicines are hugely beneficial for the middle class and the poor, as these medicines are easily available at affordable and low cost. The PM also appealed all beneficiaries to popularise the medicines among all sections of the population. The Prime Minister next spoke to Suresh Chand Behar from Bhubaneswar in Odisha, who also highlighted the health and monetary benefits of using Jan Aushadhi.

READ ALSO  Over 5,000 people from Mysuru to attend Modi rally in Bengaluru

PM Narendra Modi thereafter interacted with Babita Rao, a housewife from Mysuru, who has been using the medicines for the past four years.

Explaining the benefits of using Jan Aushadhi medicines, she maintained that she achieved far more good results than using branded medicines for maintenance of her health.

Pointing out that she suffered from hypertension (BP) and blood sugar for years spending about Rs. 15,000 a month on an average, Babita Rao said that ever since she started using Jan Aushadhi medicines, it not only saved her money but also improved her health.

She further said that Jan Aushadhi Kendras in Mysuru has popularly come to be known as Modi Medical stores.

Replying to her, Modi said that the youths and the educated are hugely influenced by social media networks and other communication platforms and the Jan Aushadhi campaign must be taken further forward to ensure access to medicines for all, including the last person in the society.

The Prime Minister later interacted with Urvashi Patel of Surat and Dr. Shailesh Khandelwal of Raipur, before winding off.

Karnataka Chief Minister Basavaraj Bommai, in his video message, said that he was happy to note that Mysuru is one of the seven cities selected for interaction with the Prime Minister.

Contending that Jan Aushadhi is getting popular by the day, he said that these medicines are increasingly being consumed in the State as they are available at affordable prices, with good quality and efficacy.

Minister Dr. K. Sudhakar, who spoke after inaugurating the event in the city, suggested Private and Government Doctors to prescribe only Jan Aushadhi  medicines instead of branded ones.

Pointing out that the key objective of the initiative is to ensure availability of quality medicines at affordable prices to all, he said that the theme of Jan Aushadhi Diwas this year is ‘Jan Aushadhi-Jan Upyogi.’