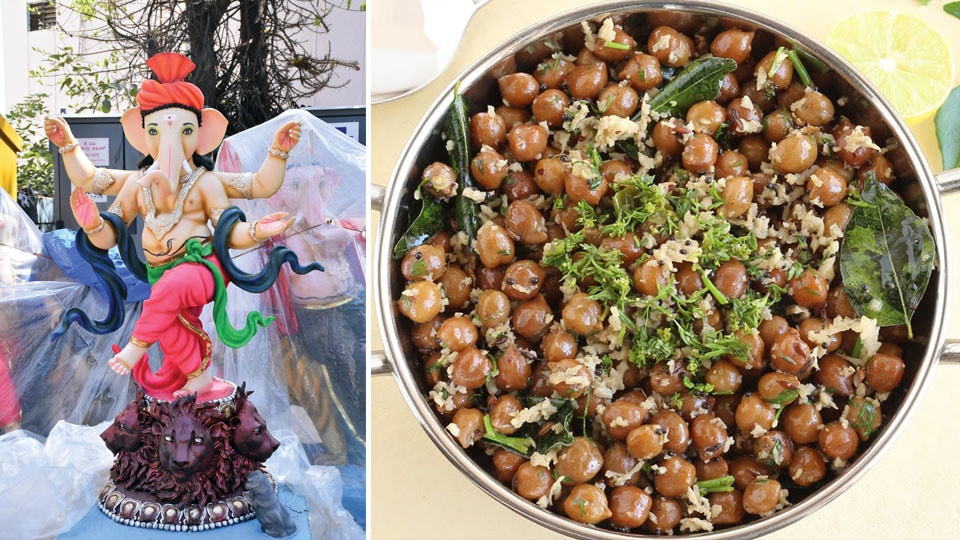 Ganesha in a jiffy

For many artisans of Mysuru, there are two seasons a year: The season of festival and the rest of the year.  Walk down the by-lanes of Mysuru just before Ganesha Chaturthi you get a glimpse of the life of the artisans who have been creating Ganesha idols for years now.

As the festival nears, narrow lanes are jammed with vehicles. Everyone is in a hurry to pick up their idols and head home. While some live close by, others have come from the neighbouring places. In the months leading to Ganesha Utsav, there is an added charm to these lanes as the idols take shape. The streets are interspersed with workshops situated just a stone’s throw away from each other.

With the festival at our doorstep, artists are furiously at work with clay, coconut husk and colours. Usually it is a laborious process that starts from choosing the right clay, manual labour to soften the clay, shaping the idol, attaching parts and all paraphernalia of the idol.

Thanks to technology, now idol-making is a child’s play. Now the soft clay and the mould are available online and one can make a Ganesha in a matter of minutes. One has to order the clay online and follow the instructions given in a pamphlet to create a beautiful Ganesha by just filling the mould with the soft clay. Once the clay is filled, the mould can easily be separated and the idol can be left to dry.

These idols can then be placed on tiny pedestals and after the clay has dried, the idol can be painted or decorated and used to worship. They can also be immersed anywhere as it is an eco-friendly idol and no harmful metal paint or Plaster of Paris has been used to make it.

READ ALSO  Non-Green Ganesha idols: Do we believe in rule of law?

Rent a Ganesha… but only in Bengaluru

With Bengaluru Mahanagara Palike (BBMP) and Karnataka State Pollution Control Board (KSPCB) warning manufacturers of Ganesha idols not to use Plaster of Paris (PoP), idol-sellers have come up with a new plan of renting out PoP idols.

And the rent per day for an idol starts from Rs. 500 and goes up to Rs. 2,000. Mainly people from Associations take these idols on rent and the idea is picking up pace especially when the idol is huge and needs a lot of investment.

Associations are using rented idols for five days or ten days depending upon their customs and celebrations. In Bengaluru, vendors are selling 16-foot PoP idols at the cost of Rs. 70,000 to Rs. 80,000. There are also idols made of fibre, which are sold at Rs. 5 lakh and above.

Since the cost of the idols is also going up, the customers are looking to rent them for just 3-5 days and are returning the idols. This plan is working out well for many organisations as they need to only pay rent and not shell out the entire idol cost.

While returning the idols, if at all they are damaged due to improper handling, charges are levied based on the extent of the damage, say vendors. Since it is a Ganesha idol, people handle them carefully. But sometimes accident do happen, say vendors.

There are many stories which demonstrate Ganesha’s love for sweets. One such story is about Sage Atri and his wife Anasuya. Anasuya once invited Lord Shiva and Goddess Parvati along with Lord Ganesha to visit her to seek their divine blessings.

Different food and delicacies were served in front of Ganesha, but nothing seemed to satisfy his hunger. After eating almost everything, Anasuya finally thought of serving something sweet. She placed modakas in front of him, which instantly satisfied his hunger and he burped 21 times. And now you know why we serve Ganesha 21 modakas every time we offer him naivedya.

Apart from traditional lemon rice, vermicelli kheer, the below mentioned delicacies are a must during Ganesha Chaturthi.

Modaka is the most popular sweet dish prepared on Ganesha Chaturthi. It is known as the favourite sweet of Lord Ganesha. Modaka is a sweet dumpling stuffed with coconut and jaggery. Ganesha’s name is also Modakpriya (One who likes modaka) in Sanskrit. As per the rituals, 21 modakas are offered to the benevolent God and eventually served to devotees.Every household makes different varieties of Modakas. Right from rice modaka and steamed modaka to dry fruits modaka and chocolate modaka, you have one for everyone.

Kadubu is also one of the special delicacies during Ganesha Chaturthi. It is a flour dumpling stuffed with a sweet mixture of fresh or dry coconut and sugar and then deep fried. Kadubu, a traditional Karnataka sweet, is also called Karjikai.

Kadalekalu Usli or Sundal (in Tamil) is one of the most common delicacies prepared during the Ganesha Festival. It is the mixture of cooked chickpea, grated coconut, green chillies, curry leaves and coriander leaves.