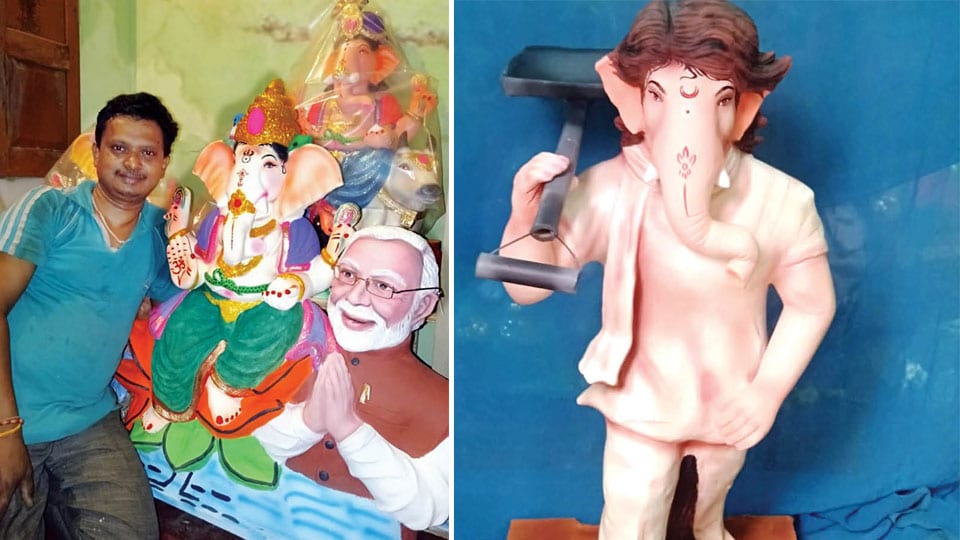 From idol of PM Modi next to Lord Ganesha to actor Yash of KGF movie, sculptors give wings to their imagination

The idol of Lord Ganesha plays a major role in the prayers that follow after the first day. As Mysuru celebrates Ganesha Chaturthi next week, artists have found the perfect opportunity to give shape and form to their creativity.

From a figurine of Prime Minister Narendra Modi carrying the Lord on his shoulders to the Ganapati stopping a distressed farmer from committing suicide, idols this year are replete with themes inspired from contemporary topics. There are also Ganesha idols saving human beings from floods and landslides.

Ganesha Chaturthi has given wings to sculptors to think out-of-the-box and churn out idols from articles ranging from juice bottles and wheat flour to biscuits and peat moss. Quirky and bizarre, these idols are taking devotees by surprise and they are willing to pay extra money to have the idols at their homes.

Certainly, vendors of Ganesha idols have become market-savvy. Last year, having witnessed the popularity and run-away success of the movie Baahubali, as if to cash in on the craze, vendors sculpted their ‘Baahubali-Ganesha’ models that were a big hit. Other popular models included Spiderman Ganesha, Narasimha Ganesha, Tirupati Balaji Ganesha and Ganesha mounted on Garuda, the mythical humanoid bird, grappling with a snake that is fashioned to look like a Chinese dragon.

In Mysuru, Manjunath is one of the popular Ganesha idol-makers. He has been making idols for more than two decades. Speaking to Star of Mysore, Manjunath, a resident of Vokkalageri, said that he started to make Ganesha idols at a young age since most of his family members were involved in the art. He credits Sundaramma, his aunt, who taught him to make these idols.

READ ALSO  Flower vendors not for shifting business to J.K. Grounds during festivals

Manjunath’s speciality is that he makes a variety of Ganesha idols connected to the present trend. Since Prime Minister Narendra Modi is a popular and an influential personality, Manjunath has made a special idol of Modi next to Lord Ganesha.

“People want their idol to stand out and be different. Customers look for the most unique and aesthetically appealing idols to adorn their homes. We find takers for the unique designs we bring in, even if they are expensive,” says Manjunath.

A post-graduate in History, Manjunath decided to continue with his family business and has even passed on the legacy to his son Shivakumar, who studies 5th standard at Baden Powell School. While Manjunath makes the idols, his wife Sunitha paints them with different natural colours. Not only they, even his younger brother Raghavendra and sister Pushpalatha are into idol-making.

Manjunath and his family start preparations from January every year and it takes at least six months for clay to be readied to make idols. Manjunath is so popular in his locality that he starts getting orders much earlier to the festival season and he only makes idols depending on the orders.

“Sometimes people come asking for Ganesha idols as tall as 10 ft. but I reject them as we only make clay idols which are maximum 6 ft. tall,” he says.

READ ALSO  He ensures elephants are fit as a fiddle

The clay idols are made of terracotta mud. They get a fresh coat of paint in gold and silver to make them look attractive. The prices of clay idols are roughly double that of the Plaster of Paris (PoP) idols. The maximum size for a clay idol is five feet. They crumble easily, and so we cannot make the large idols with clay,” explains Manjunath.

The family also takes good care of idols in case they are not sold. First, they cover them with thick plastic and then keep them at a safe place. And once the festival is over, Manjunath and family continue their idol- making. This time is the Dasara idols, kept for display during Navaratri.

Age is no bar here

The 83-year-old Subbaiah has been making Ganesha idols for the past 40 years. His wife Shanthamma and two sons Venkatesh and Mahesh  lend their hands for making idols. For Subbaiah, idol-making is not that profitable as he earns very minimal from them. However, once the festival is over he works in a rice store at Bandipalya where he earns a little money.

Speaking to SOM, Subbaiah, a resident of 5th Cross, Kumbarageri, expressed his displeasure over the authorities for not taking enough measures to stop use of PoP idols. He said though there are strict rules against use of PoP idols, a few have continued to sell them.