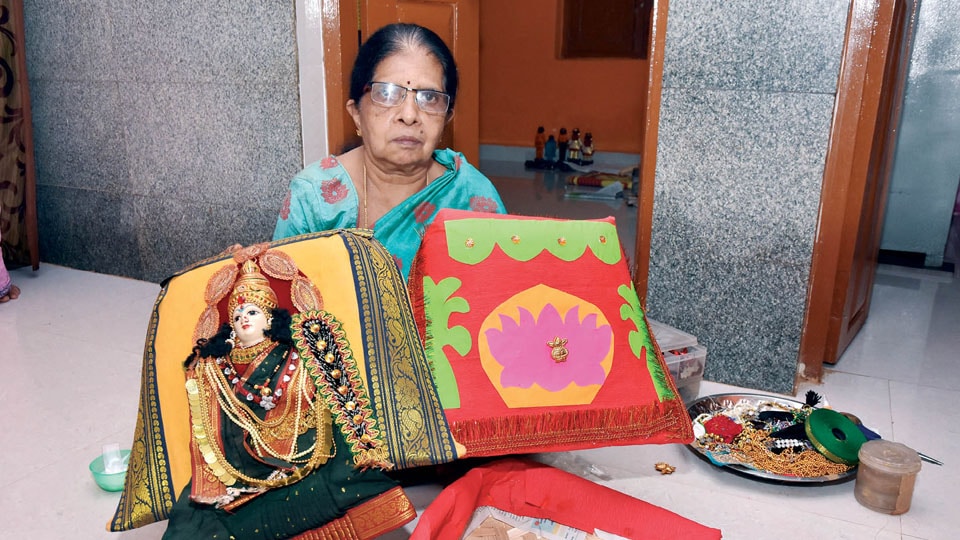 Bamboo artisans receive a caning, thanks to non-availability of bamboo and dipping sales

Whatever be the pace at which the world is changing, cultural beliefs do not seem to have taken a backseat. All the festivals being celebrated with the same fervour as in the past is enough proof to this.

“Festivals of any religion are not about blind beliefs or superstitions. Festivals are celebrated to drive away darkness and gloom, an occasion for friends and relatives to meet, share and enjoy life,” says Jayanthi Mohan, a resident of T.K. Layout while she enthusiastically prepares for Gowri-Ganesha festival.

Amongst all the preparations that go in for this most popular festival across India, in the Southern States, a special addition to the Gowri festival is the ‘Morada Bagina’ that is offered. Traditionally the ‘Bagina’ (an offering) is given in the ‘mora’ (bamboo trays specially designed to clean grains) and symbolises a sign of prosperity and peace. Women exchange these Baginas and pray for prosperity.

‘Mora,’ the humble kitchen utensil woven from bamboo strips, gains immense significance during festival. This simple bamboo tray, which is otherwise mainly used to separate the grain from the chaff, clean grains and pulses, is an auspicious and integral part of the Gowri festival.

“The Bagina contains all the pulses and cereals that we use every day and also these are the ‘Navagraha Dhaanya’. Each one of them represents a planet and symbolically this is a way to wish that the receiver has good positive planetary influences. These practices keep the tradition of giving and receiving alive and bring so much of joy to all,” says Srinivasamurthy Kanagal, a resident of Vijayanagar and a priest and astrologer by profession.

The Bagina basically contains five of all the items placed, symbolising the five elements. While it has rice and four types of pulses, five puja articles and five cosmetic items, jaggery is also included. It is said the 16 items kept in the Bagina signify the presence of Goddess Gowri in 16 different forms of Lakshmis or Shodasha Lakshmis.

Bagina is exchanged between women, given to daughters by mothers and by the daughters to the mothers. Offering and accepting Bagina is a symbol of prosperity, wishing that all things offered in it will continue to increase and remain inexhaustible, as also a prayer and blessing to remain a Suhaagan (Mutthaides) throughout one’s life.

On the festival day, after puja, Bagina is first offered to Goddess Gowri. Bagina is also offered by the bride during Gowri puja on the day of marriage and is considered very auspicious.

But why is the Mora used? “Earlier (and even now in rural areas) Mora is used to clean rice, grains and cereals and had other multipurpose uses too. There were hardly any steel used back then. Brass and copper were heavy metals and Mora made of bamboo was not only eco-friendly but also light and user-friendly. Today we see painted and decorated Mora used as wall decorations”, adds Ashwini Raghavendra, a resident of Jayanagar who takes elaborate steps to make the Mora look artistic and beautiful.

This humble Mora which gains all the importance during Varamahalakshmi, Gowri festivals and during marriages too, is a means of livelihood for many families from the Medar community, who use their skills to weave mora, ladders, shades and other artistic pieces.

During this season you will find many artisans from the community, camping in several places in the city, like Bamboo Bazaar, Nanjumalige, some parts of Kuvempunagar and Agrahara selling their wares to eager customers.

More than 40 families of the Medar community from Chamalapura near Nanjangud Railway Station have stationed themselves under the cool shades of the Peepal tree near the 101 Ganapati temple in Agrahara and are working tirelessly to make most of the demand. These families also weave bamboo baskets, hand fans, ladders apart from the Mora.

While some of them have stayed back in the city, others travel daily from Nanjangud. Weavers manage to make two different sizes of Mora which takes around 30 minutes to weave and sell at Rs. 120 and Rs. 80 per pair respectively, says N.S. Siddu, who has been selling his ware here since a few years. As per tradition, Mora is always purchased in pairs. Single ones are not bought.

However, procuring Bamboo of late is not easy. Earlier, raw material was collected from nearby forests. They would chop the bamboo branches, leave them for about four days to dry up. These branches would be soaked in water for 2 days and the soaked branches would be stored for future use.

But Government policies have now prevented the Medars from chopping off bamboo branches and they have to buy bamboo branches only from the Government depots. “The cost of production has gone up but the selling prices of our products haven’t seen a proportional rise,” rues a weaver.

Owing to severe shortage of bamboo, the bamboo creators are literally on the roads today, unable to find a market for their products, faced by severe competition from plastic ware.

Most of these people stick to their traditional work because they don’t know any other skills. Despite their hand-to-mouth existence, they keep a cheerful face, eagerly looking forward to the puja season for a surge in their sales to earn a decent livelihood.

After the season, all these families will get back to their home towns hoping that next year they will sell more pieces and praying that they can store and preserve the unsold bamboo works safely.