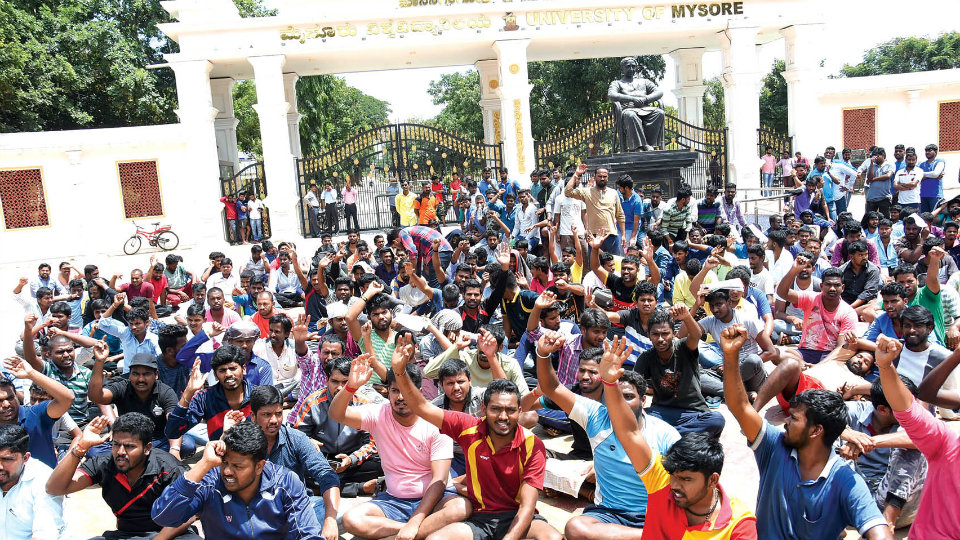 Mysuru: Listing out various problems they were facing, nearly 250 students of the Old Boys Students Hostel in Manasagangothri, staged a snap stir here this morning, first in front of the hostel and later at the South Gate entrance of Gangothri near Kuvempu statue.

Alleging that the facilities in the hostel were pathetic, the students said that  drinking water unit was not working and since the water was contaminated, the students were falling ill frequently. Mosquito menace had increased and there were also bed bugs. The buckets and taps in the washrooms had broken besides lot of grime and algae collected which made the students slip while taking bath. The list of litanies continue with students demanding proper hangers to dry clothes and repair of western toilets which are not in working condition. They charged that the solar panels to heat water are not working. Weeds have grown near the clothes washing area and as a result there is fear of scorpions and snakes lurking around apart from other creatures.

The hostel room walls have not seen paint for a long time and it is very difficult to study in such a dull and drab atmosphere, they said. The whole hostel premises were quite unclean as proper cleaning materials like phenyl, broom sticks were not being used properly. Even though there was a gym facility, it was kept under lock and key most of the days and they wanted it to be kept open every day so that they could make use of the facility.

They also urged that every month the Dean of Students Welfare and other officers must hold meeting with the students and try to solve the problems on a regular basis.

As the protesters had moved to the South Gate entrance, those coming to the  campus had a tough time, as they were being prevented by the students from entering.

Student leaders Suresh, Basavanna, Mohit, Rajesh, Govinda and others participated in the protest.

Pourakarmikas stir enters fifth day: Even as the strike by the women Pourakarmikas of University of Mysore entered the fifth day, they had a strong support with former Mayor and former Safai Karmachari Chairman Narayan visiting the spot at the South Gate entrance of Manasagangothri.

He said that women employees were being discriminated as they were being paid less than men. He also demanded the intervention of Higher Education Minister G.T. Devegowda to resolve the issue as the University authorities had turned a blind eye to the problems of the Pourakarmikas. He threatened that the strike would be intensified if their demands were not met. Pourakarmika leader Mara and others were also present.