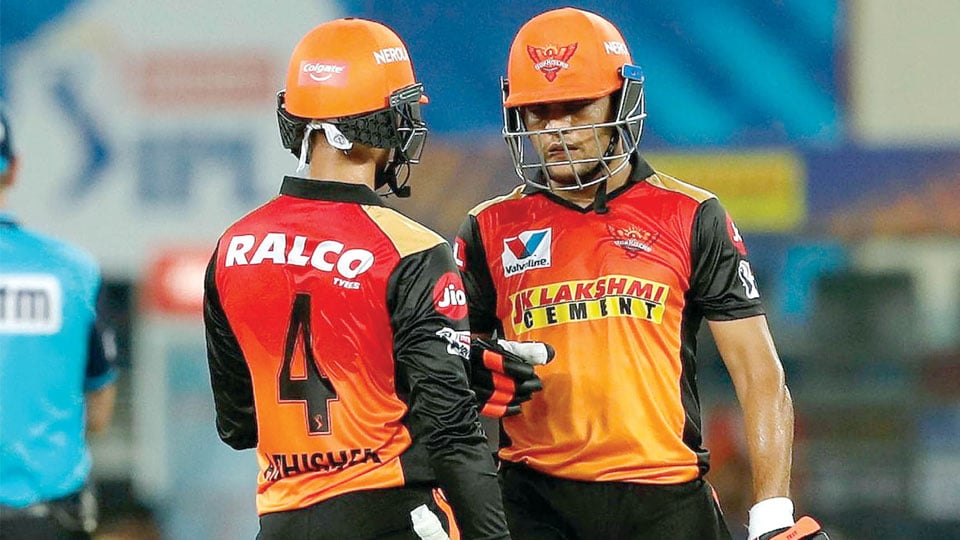 Dubai: Sunrisers Hyderabad (SRH) registered their second win in the row after they beat Chennai Super Kings (CSK) by seven runs in the 14th match of the Indian Premier League (IPL) 2020 at the Dubai International Cricket Stadium yesterday.

Over the next four overs, Manish hit a four every over as he and David Warner went on to add 46 runs for the second wicket. However, Shardul Thakur broke the partnership in the eighth over, dismissing Manish for 29.

Warner and Kane Williamson added 22 runs together, but CSK managed to push SRH on the backfoot as both the experienced SRH batsmen were dismissed on the successive deliveries in  the 11th over.

While Faf du Plessis pulled off yet another stunner on the boundary rope to hold on to a fine catch to get Warner out off Piyush Chawla’s bowling, Williamson was then run-out for 9.

SRH needed a partnership and two of their youngsters — Abhishek Sharma and Priyam Garg — answered the call. Sharma went after Ravindra Jadeja in the 14th over, hitting a four and a six to push SRH past 91.

While the two scored 20 over the course of next two overs, it was the 17th where SRH hammered 22 in an over, courtesy a Garg attack. The right-hander hit Sam Curran for 3 fours and a six.

Although Sharma got a couple of reprieves in the 18th over, Chahar managed to get his second wicket, dismissing the left-hander in the same over. Garg, then, brought up his maiden IPL fifty in the penultimate over before SRH eventually ended their quota of 20 overs with 164/5 on board.

Defending 164, SRH bowlers kept the things tight before Bhuvneshwar Kumar got Shane Watson out in the third over.

A couple of overs later, Abdul Samad got the wicket of Kedar Jadhav after Warner held on to a sharp catch in the covers.

CSK were 42/4 when Jadhav got out and needed a partnership to steady the innings and M.S. Dhoni and Jadeja did just that.

The two put up the much-needed partnership, but SRH still did not concede too many easy runs before Jadeja hit three fours in the 17th over to push CSK past 100.

Jadeja then hit a four and six in the 18th over bowled by T Natarajan to complete his fifty. However, he got out in the same over. While Curran hammered a six on the first ball he faced, the task at hand still was not easy.

SRH, meanwhile, suffered an injury blow as Bhuvneshwar Kumar, after bowling the first ball of the 19th over, had to leave the field. Khaleel Ahmed, who completed the over, conceded 15 more.

CSK needed 28 runs off the final over, which was bowled by Samad. While the over began with 5 wides, Samad and SRH managed to hold their nerve to seal a 7-run win.