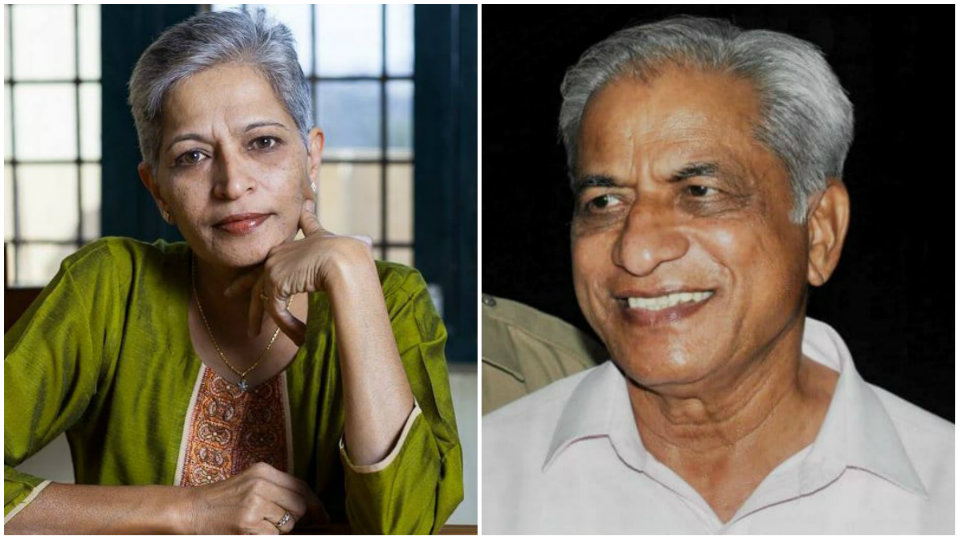 Bengaluru:  The Special Investigation Team (SIT) formed by the Karnataka Police to investigate the murder of journalist-activist Gauri Lankesh is close to solving the case. Four more persons linked to the radical right-wing outfit Sanathan Sanstha and its sister outfit Hindu Janajagruti Samiti (HJS) have been arrested and charged with conspiracy to kill rationalist-writer Prof. K.S. Bhagawan in Mysuru.

The accused are also associated with K.T. Naveen Kumar (37), an activist of the Hindu Yuva Sena, who attended several meetings of the HJS and Sanathan Sanstha in 2017, and was arrested in March 2018 from Mandya in the Gauri murder case.

Journalist Gauri Lankesh, editor of the weekly Lankesh Patrike magazine, was shot dead by unidentified men at her residence in Bengaluru on Sept. 5.

The SIT chargesheet, running over 650 pages, has stated that Gauri Lankesh was gunned down after her assailants found her to be against a specific religious community and their ideology. However, no outfit has been named in the document for being responsible for her murder.

Naveen was named as an accused in the Gauri murder case after he was taken into custody on the basis of findings in the plot to kill Bhagawan. After helping to execute the Gauri killing, Naveen was allegedly roped-in by his handlers to facilitate the killing of Bhagawan around December 2017, Police sources said.

Naveen Kumar reportedly told investigators that he received instructions to kill Gauri and Bhagawan from a Mangaluru-based man he could identify only as Praveen. The investigation agencies have now identified HJS activist Sujeet Kumar as Praveen.

The chargesheet alleges that Naveen procured the bullets that were used to kill Gauri and also allegedly provided local logistical support to the shooters and guided them to her house and office in Bengaluru.

Call intercept recordings of Naveen speaking to his associates on the case, a statement by his friend Anil Kumar from Maddur on Naveen boasting about his involvement, his role in procurement of bullets are some of the irrefutable evidence against him, the sources said.