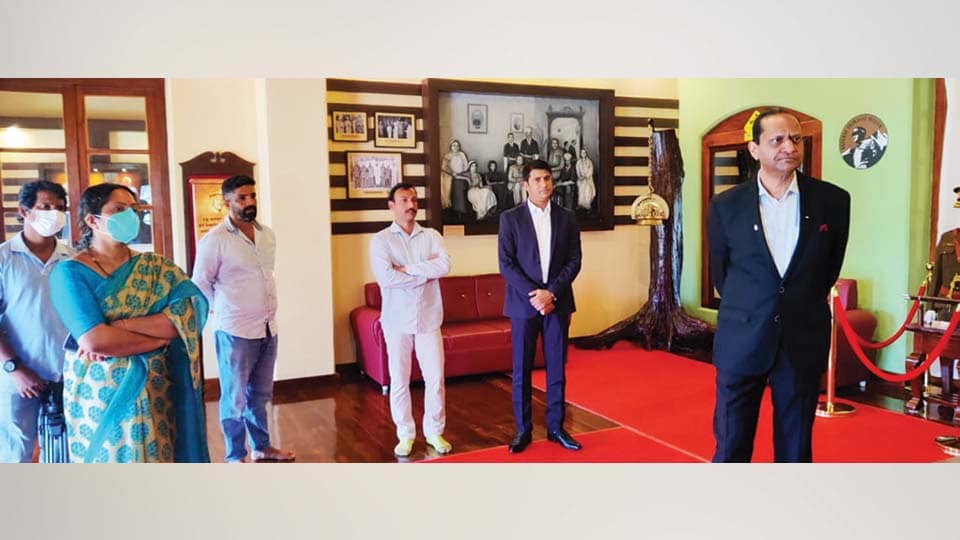 More memorabilia of the General to find place in the Museum

Madikeri: ‘Sunny Side’, General K.S. Thimayya’s house in Madikeri that has been converted into a Museum and a War Memorial, was dedicated to the nation in February this year by President Ram Nath Kovind. The place attracts a steady stream of visitors including tourists, Defence personnel and the local residents.

On Friday, the celebrated General’s grandson Kongetira Belliappa visited the Museum that is located on G.T. Road in Madikeri. Belliappa is the son of Thimayya’s daughter Mireille, who married Maj. Gen. Kongetira M. Chengappa.

General Kodandera Subayya Thimayya served as the Chief of Army Staff from 1957 to 1961 in the crucial years leading up to the conflict with China in 1962. Impressed with the way the Museum has been designed and maintained, Belliappa said that the place can be further improved with more memorabilia of the General.

Going around the Museum, he saw his grandfather’s photos and other artefacts. He recollected the service of General Thimayya who was known as the ‘Soldier’s General.’ “The family will strive to include more photos and items of relevance of the General and make it available to the public so that many more can get inspired to join the Armed Forces,” he told reporters after the visit.

Some of the photographs portrayed the legendary General’s brilliant strategies and daring that have set the standard for professional soldiering and leadership. Belliappa appreciated the collection of photographs, artefacts and other items related to the Indian Army at the Museum.

Before visiting the Museum, Belliappa met Kodagu Deputy Commissioner Dr. B.C. Satish and held a detailed discussion with him on how to improve the Museum. The DC assured that the District Administration would extend all help to make the Museum more accessible and to include more and more artefacts.

Deputy Director of Kannada and Culture Department K.T. Darshan, Manajooru Majunath, a relative of General Thimayya Kambiranda Nithin Ganapathy and others were present.