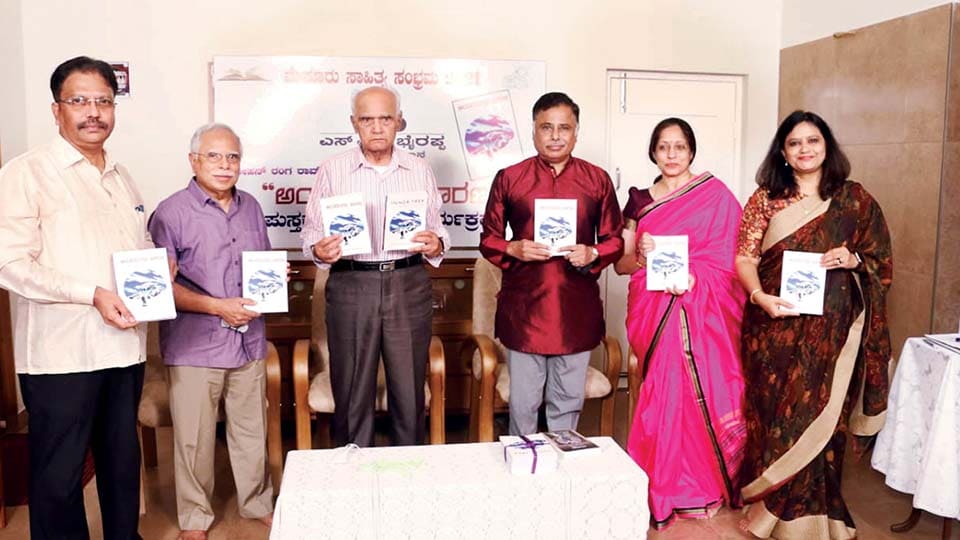 Published both in English and Kannada, book delves into mysticism of sacred Kailash

Mysuru: Dr. S.L. Bhyrappa, one of India’s most noted and admired novelists, launched the book Inner Trek – A Reluctant Pilgrim in the Himalayas, authored by Mohan Rangarao at an event organised by Mysore Sahithya Sambrahma and S.L. Bhyrappa Sahithya Prathishtana at Bhyrappa’s house in city recently.

Speaking about his own experiences, Dr. Bhyrappa said it was his own trip to the Himalayas that gave him a clear vision and direction for his novel Parva.

“When I saw the surroundings, I realised the significance of why a writer has to really go to a higher place from where he can get inspired. I even now recall the incidents as they happened. It was here that I got a clear vision of Parva, its structure and its flow,” he stated.

“Every writer needs to go to great heights to have a holistic vision about the subject he wants to write on. This was exactly how I felt when I saw the ‘Vyas Gufa’ caves in Badrinath while I was doing my research,” he explained.

Dr. Bhyrappa also mentioned that he visited all the mountain ranges in the world, from the Andes to the Alps but it is only in the Himalayan ranges where he felt a spiritual aura around them.

Inner Trek – A Reluctant Pilgrim in the Himalayas has been published both in English and Kannada (Antarangada Chaarana) and delves into the mysticism of the sacred Kailash. It is a compelling read for everyone who wants to experience the power of divinity in Nature.

The book candidly shares the author Mohan Rangarao’s transformative journey to the Himalayan mountains, how his skepticism dissolved about the sacred Kailash and his spiritual realisation during the trip. “The book is not just a travelogue. It is a narrative of emancipation from everything that we are otherwise so attached to,” Rangarao said.

“It is a blend of humour, honesty and keen insight. I have narrated a journey towards a deeper understanding of the world around me,” added the retired industrialist from Mysuru.

Continuing, he said how certain sights and images create moments of epiphany in our lives. The book captures instances where such moments kill the ‘I’, the ego-self and makes one feel infinitely insignificant.

“I have built several brands and they have been successful ventures. But it is the experiences during this visit that awakened the author in me and compelled me to share them with the world,” said Rangarao.

He hopes this book, the first among many that he plans to write, will inspire people to take a trip to Mount Kailash and Mansarovar, to soak in the spiritual serenity of the mystical mountains.

Shubha Sanjay Urs, Curator  and Chairperson of Mysuru Literature Festival (Mysuru Sahithya Sambrahma), thanked  S.L. Bhyrappa Sahithya Prathishtana for the one-of-its-kind book launch and the first such event to be held under its banner.

R. Guru, Industrialist; Dr. G.L. Shekar, Honorary Secretary of S.L. Bhyrappa Sahithya Prathishtana and others were present at the event.

About the author: Mohan Rangarao, youngest brother of well-known industrialist R. Guru, is a prominent industrialist, blogger and philanthropist from Mysuru. An MBA and engineering graduate, he was instrumental in the launch of several businesses across Karnataka.

The 64-year-old entrepreneur loves trekking, travelling across the world, playing tennis and  treats life like an enterprise.

Tragedy struck him early in life and shattered his belief in anything divine when he lost his blind daughter to cancer when she was nine.

His powerful writings are mostly experiences he gained from his expeditions around the globe, philosophical analysis of some of the most prevalent and pertinent issues of every common man and a mirror to how he handled the most difficult challenges in his own life.

He is working on his second book Myopia through which he hopes to reach out to parents of children with disabilities, entrepreneurs facing challenges and family businesses.

ONE COMMENT ON THIS POST To “Dr. S.L. Bhyrappa launches book ‘Inner Trek – A Reluctant Pilgrim in the Himalayas’”