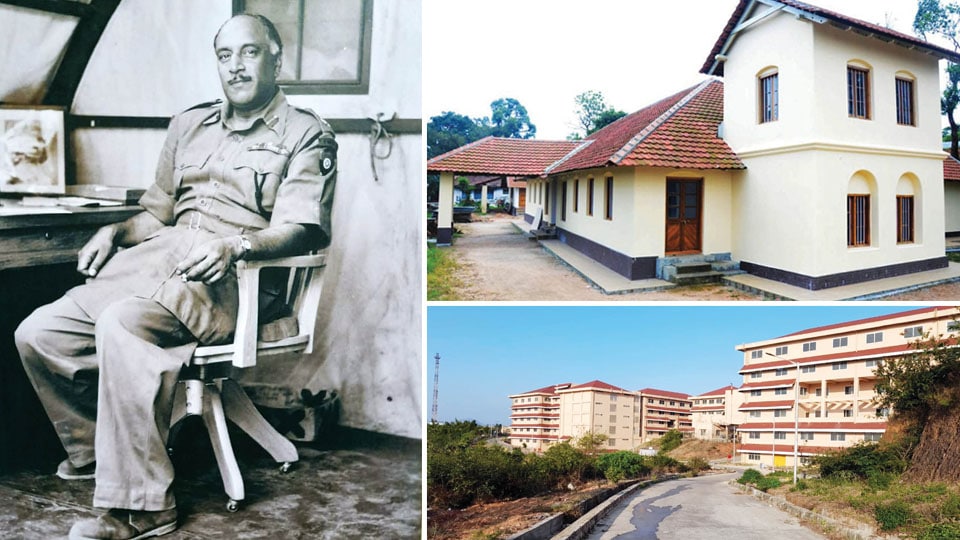 Last Sunday, 31st January 2021, I went to Madikeri on a bore-breaking trip with my wife and two friends. It was a two-and-a-half-hour journey by car via Kushalnagar. The road being good travelling was comfortable.

Kushalnagar is the Gateway to Kodagu, with River Cauvery flowing quietly as a boundary between Mysuru and Kodagu districts. The two districts were connected with a bridge. It was a surprise for me to find the town growing enormously. It has become a huge tourist hub. There is Harangi Dam and a Garden a few kilometres away and in the city outskirts you have the famous and very popular Nisargadhama  — riverside forest safari and boating with huge shopping arcades spread over a very large area on Madikeri road.

Another tourist attraction is the Buddhist Golden Temple on the other side of the river at Bylakuppe, a Tibetan Colony. There is a Sainik School, Engineering College and many more. It is going to be a boom city of Kodagu beforelong.

We reached Madikeri rather late at 3.30 pm keeping our schedule to just three places — Gen. K.S. Thimayya Museum, Medical College and Kodava Heritage Centre. Our President Ram Nath Kovind would inaugurate the Museum tomorrow (6.2.2021) and it was as it should be. Our President, under the Constitution, is the Commander-in-Chief of our Armed Forces.

Our first visit was to the Gen. Thimayya Museum and those in charge of arranging the artefacts, photographs, videos, audios etc., have indeed taken much time, trouble and care. Special compliments and commendation should go for this great effort to Air Marshal Kodandera C. Nanda Cariappa (retd.), Maj. Biddanda A. Nanda Nanjappa (retd.) and Col. (retd.) Kandrathanda C. Subbaiah. All residents of Kodagu.

As we were sauntering around the place, with a few Army personnel and local labourers working to get the Museum ready to receive the President, there came the most talkative man I have ever met in my life, Maj. Nanda Nanjappa. Indeed a live-wire man bursting at the seams with a zeal and enthusiasm for the work on his hand — getting the Museum ready in all aspects for the big day. I listened to him about how the Museum happened and the herculean efforts he and his friends-in-arms have made to get the place ready for the VVIP arrival.

I am familiar with this house called “Sunnyside” where Gen. K.S. Thimayya’s mother lived. She was a very famous lady known for her riches and celebrity status. The house is on the main road, as you enter Mercara from Mysuru, on a slope. I remember, as a student in Madikeri in the 1950s, going for evening walk with fellow students and friends on this road and occasionally talk about the lady of the house with awe. There was a fountain visible from the gate with an angel perched on top. The house being at the bottom of the slope was not visible to the road.

According to my information this house was sold by Gen. Thimayya’s wife to the Government of Karnataka in the year 1972 and the RTO Office took over this house, with about 2.5 acres of land, for its use. Wonder it took over 50 years to reclaim the house for the Museum under the Kannada and Culture Department of the State Government. Thanks to the efforts of Field Marshal Cariappa – General Thimayya Forum comprising about 22 members to get the State Government to vacate the RTO and set up this Museum. However, the theme, concept and the vision of the Museum came mainly from two Army and one Air Force Veterans who are also members of the Forum — Air Marshal K.C. Nanda Cariappa, Col. K.C. Subbaiah and Maj.  B.A. Nanjappa — that I mentioned earlier. A good job well done. Sure, the Supreme Commander of Indian Armed Forces, Ram Nath Kovind, will have many good words to say about the Museum and give a big Shabash for the Forum.

I do not want to be presumptuous but I guess there is a need for a small library with books on Gen. K.S. Thimayya and other top brass in the Army, which is also a reading room for reference-seekers and book-worms.

Our next visit was to the Medical College, about five kilometres from downtown or 11 kilometres via Abbey Falls. It is located atop a hill in a village known as Karnageri. A number of high-rise buildings, washed in light pink, are visible from a distance as we manoeuvred the never-ending, serpentine, well-laid out concrete road. The construction of the road itself must have cost a fortune. A clear case of penny wise, pound foolish.

Access to city for students and staff must be a very time-consuming and tiring exercise. Specially during monsoon. In Kodagu, specially Madikeri, climate is of two kinds — monsoon and winter veiled in mist. Summer is, no doubt, severe but short.

I left the place wondering if the Government officials or the politicians could not find another place, plain land in Virajpet, Gonikoppal or Kushalnagar considering the importance of the logistics and environment for locating such an important institution. Let it be.

My next visit was to my mad obsession, the Kodava Heritage Centre at Vidyanagar in Madikeri. About this Centre I have written enough and more and our reporters of Star of   Mysore and Mysooru Mithra too have published many pictorial reports. All in vain.

The idea of a Kodava Heritage Centre may be well-meaning and also much-needed for a Vanishing Tribe, Kodavas. But, the way it was held to ransom in the past 15 years is tragic and an insult to “Kodavame”. As I saw it, I do not think it will be completed at all and seems to be in danger of being abandoned as unviable. Is it jinxed? If it is so, so be it. What cannot be cured must be endured till the end comes. There is no medicine for fate !

That way the fruition of Gen. Thimayya Museum is a miracle. Unless such miracles happen, this Heritage Centre will not come to fruition.