Home » News » Get set for Yoga at Mysore Palace lawns 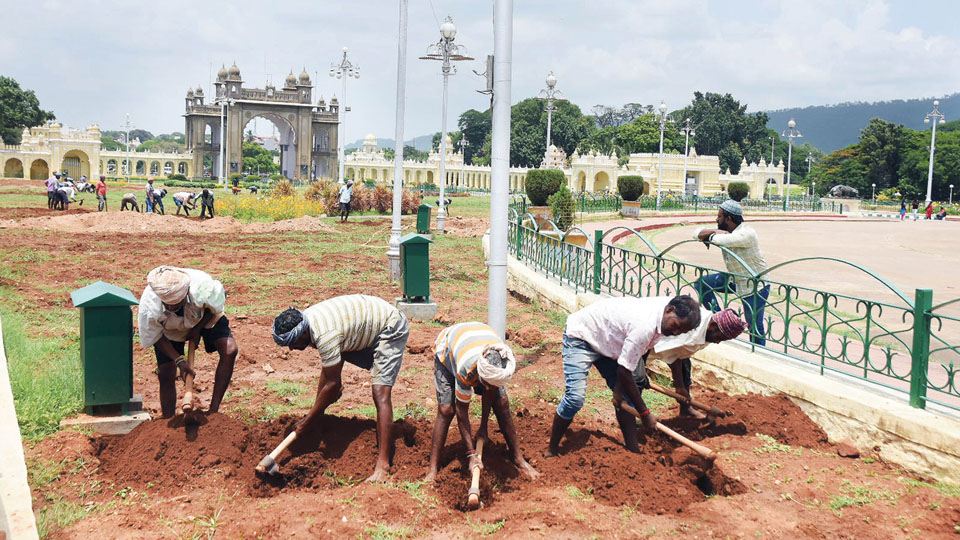 Get set for Yoga at Mysore Palace lawns

Mysore/Mysuru: The Horticulture Department and Mysore Palace Board are on a mission mode to make the June 21 International Day of Yoga a memorable one as Prime Minister Narendra Modi is participating in the Mass Yoga at the iconic Mysore Palace. All the gardens and parks inside the vast campus are getting a makeover with concrete blocks and medians getting a fresh coat of paint.

Along with making the PM’s event a grand success, the focus is on building Brand Mysuru Yoga and for that, a beautiful venue is required. As such, the beautification is being jointly undertaken by Horticulture Department and the Palace Board.

The photos and videos of the event will go viral across the world and the District Officers are leaving no stone unturned to ensure that the Mysore Palace, Mysuru Yoga and Brand Mysuru will get international recognition.

Usually, the parks and the Palace surroundings are beautified every year only for Dasara and sometimes for the New Year and for the remaining months, they remain unattended.

Now, over 30 agriculture and horticulture field workers have been hired to do various tasks inside the Palace, around temples, and at parks where facilities are being made for Yoga enthusiasts to perform on the D-Day.

The District Administration has decided to allow 12,000 Yoga participants inside the Palace for the mass performance and this time, there will not be any record-breaking feat. Rather, the entire administration will focus on the Palace event.

The vacant land — particularly opposite the place where the Dasara procession begins with the Golden Howdah-carrying elephant — is being dug up to lay the lawns and plant saplings.

These saplings have already been grown at various Horticulture Department offices and also the Palace Board office. The saplings will be brought to the location and planted here so that they can flower on June 20 and 21, making the Yoga performance colourful. The path from Jayamarthanda Gate till the front portion of Palace will get a special look with a variety of flowers. Flower pots will be placed in an attractive manner. There are plans to place the pots, symbolising Yoga asanas.

Space for Yoga inside park

The park near Bhuvaneshwari Temple is getting a makeover as the authorities are planning to allow the Yoga performers inside. The grass that has overgrown is being trimmed so that a comfortable grass bed is created for the performers to spread their mats and perform.

Likewise, the place where elephants are tied for Dasara is being beautified along with the park. Many medians and culverts are getting a fresh coat of paint. Interlock tiles are being laid on the path behind Bhuvaneshwari Temple and Kote Anjaneyaswamy Temple till Kodi Someshwara Temple and the road that leads to Jayamarthanda Gate.

A couple of defunct fountains inside the Palace are being repaired and cleaned to restore them to their original shape. They too will get a fresh coat of paint and will be ready to spring water on the main Yoga Day.

Though the event is held early in the morning, the authorities have decided to replace defunct lights inside the Palace compound and also inside parks and gates. The absence of lights will prove a security risk.

Also, as all the Yoga performers have been told to come to the Palace at 4 am for the PM’s event that is scheduled to begin at 7 am. Lights are required for the Yoga Gurus to allot places for performance.

Also, the performers will be allocated dedicated blocks and the Police teams will be present on the Palace premises from June 20 night to oversee arrangements.

While the Yoga enthusiasts were hoping to break another record this time,  it was overruled by the authorities. As the Prime Minister is participating in the Mass Yoga, there is an atmosphere of seriousness and the security will be water-tight with no loopholes.