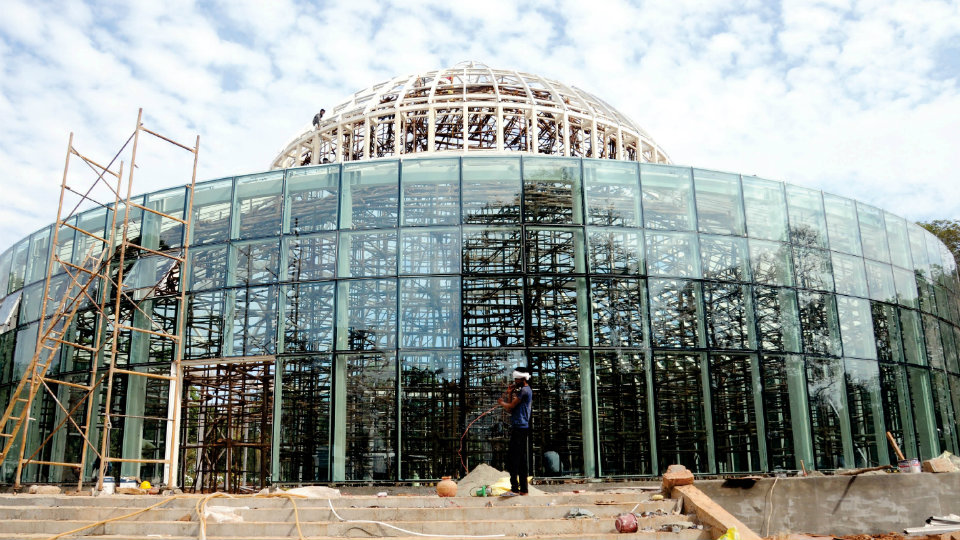 The Glass House at Kuppanna Park, which was to be ready by mid- February, will likely be open to public by the end of February or first week of March. The Glass House has been under construction for almost over a year on the lines of the one at Lalbagh in Bengaluru.

The glass fitting work has begun and the magnificent structure stands at the centre of the park, also called as Nishad Bagh, hoping to conserve biodiversity and aims to exhibit flowering plants to attract tourists. The Glass House will provide optimum temperature and other conditions for the growth of plants.

A team of workers were seen installing glass panes on the structure. Speaking to Star of Mysore yesterday, Thimmaraju, Assistant Director, Horticulture Department, Mysuru, said, “The glass panes have been fixed for the base all around the structure; only the slanting part that connects to the dome and the dome is pending. The outer framework for laying the glass panes over there is ready and we are waiting for the glasses. As the framework is done, they have taken the measurements and accordingly the glasses cut in those sizes will arrive and then the glass will be fixed. The work is going on rapidly and by February end the structure will be ready.”

A Glass House is also known as a Green House or a Hot House, where plants will be grown throughout the year giving it the required suitable growing conditions. The special solar tempered glasses are brought from Saint-Gobain Glass India, Chennai. The glasses are cut into the exact sizes according to the framework and modified at Fuso Glass India Pvt. Ltd in Chennai, a glass processor unit expertising in architectural designs. The glasses from there come in specific measurements and are easily placed on the framework. 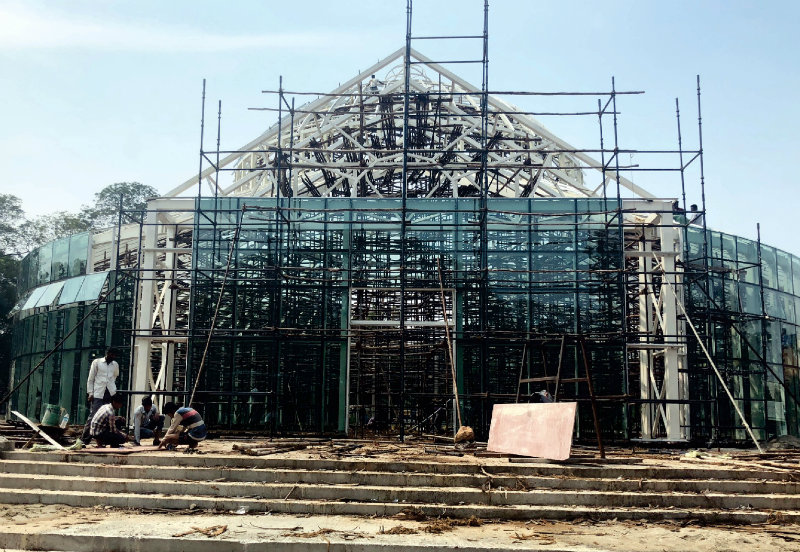 One of the four entry points to the Glass House at Nishad Bagh.

glasses which is of 6 mm thickness each, with a 1.52 mm fusion gap in between them. So, totally the thickness adds upto around 13.5 mm.

Thimmaraju said that the tempered glasses are tough in nature and have been cut, prepared and designed precisely to deliver highest quality and the two glass layers are sandwiched to give the final glass pane.

On being asked about why the project completion got delayed, he said, “There are several parameters that we need to take care of. As we want to bring out the best possible structure, it cost us a little bit of time. Rains and weather also hampered our work; We had to stop work during Dasara Flower Show. It is such a huge project and everything needs to be done precisely, so we are taking utmost care.”

The air blooming, water blooming provisions and pipelines have been laid and the machines will be installed shortly. The granite flooring around the outer area of the Glass House is being laid. There will not be any flooring inside the Glass Gouse; instead the land will be levelled by using mud and soil. 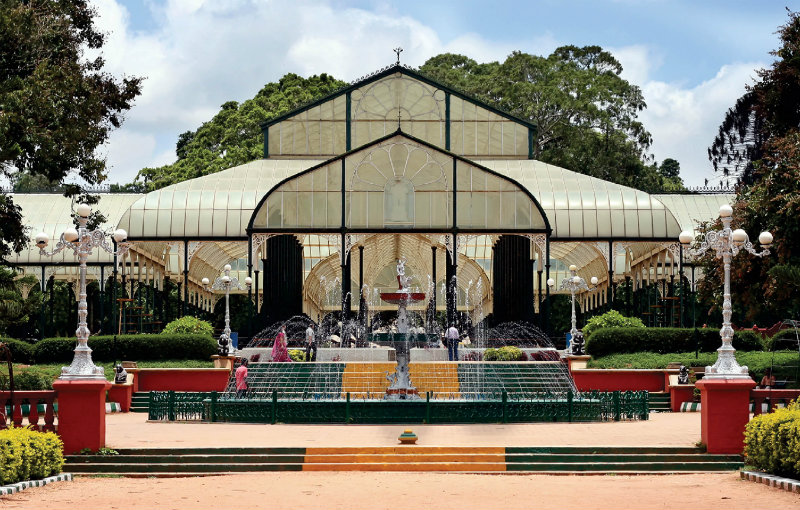 The Assistant Director said, “The concrete work and drainage works have been completed. We have also constructed a platform for the physically challenged as we have laid a path for the wheel chair. The steps are also made of concrete at the four entry points to the Glass House. There is provision for four landscapes around  the outer area of the Glass House where plants will be grown.”

“The electric and drainage pipelines inside the Glass House have been laid underground and have necessary outlets. Rain water harvesting facility is incorporated and water will be stored and reused. The solar facility at the park will be operational in the near future to provide source of energy to the lamps in the park.”

The structure, which spreads about 2,000 sq.mts, is raised on a platform of 1.5 mts and is 21 metre in height; it will trap heat and also has vents to let out excess heat. This gigantic structure located at the centre of the royal city is likely to be a major tourist attraction.