Home » Columns » Should Gods be cheaper than a luxury bungalow, cost less than a wedding? A tale of Emperors 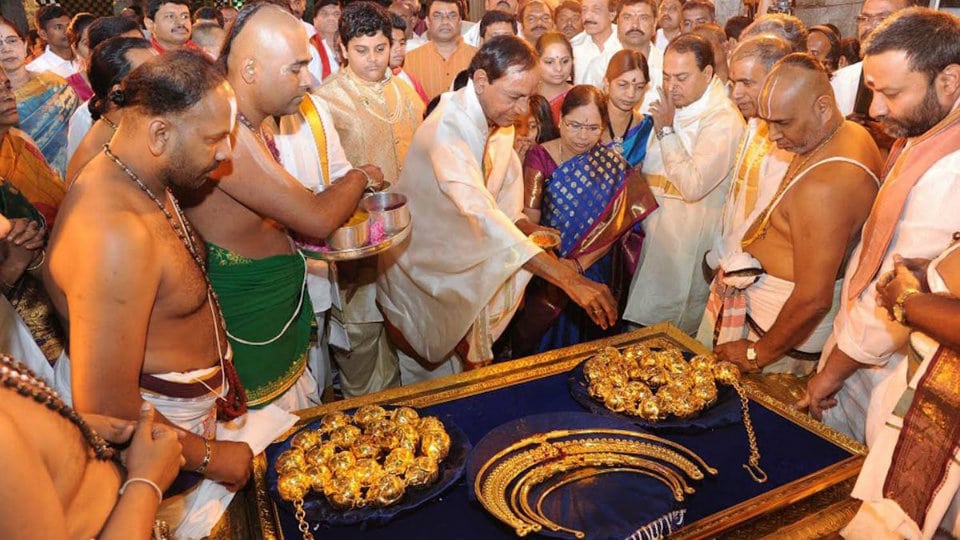 Should Gods be cheaper than a luxury bungalow, cost less than a wedding? A tale of Emperors

Chandrasekhar Rao is without doubt the most devout Chief Minister in the country today. No one gives as much space and attention to temples, sages and priests as he does; he had a Seer sit and thus sanctify the new Chief Ministerial chair in the new Chief Ministerial house in Hyderabad before he himself occupied it. During the agitation for Telengana, he had vowed to present gold ornaments to as many as five temples. Two weeks ago he fulfilled one of the vows by donating 18.85 kilograms of gold ornaments worth Rs. 5.45 crore to the holy Tirupathi Temple.

Faith is a sustaining force in India. We should be grateful for that because it encourages us to be good. Leaders with faith in the divine can be expected to bring a degree of fair-play and justice to their leadership responsibilities. Faith enjoins those in power to be guided by the principles of nishkama karma, action without expecting rewards, the central message of the Bhagavad Gita.

But to what extent is this principle honoured in practice? Faith has also become a force that leads to considerable hypocrisy these days. This is true of all religions as a cursory glance will show. Buddhism, the ultimate creed of renunciation and peace, has been an instigator of violence in Sri Lanka and Thailand. Christianity has a provision for Confession. Many go to the priest, confess their sins in holy privacy, carry out the priest’s instructions for absolution — then go back to life and commit the same sins. A dip in the holy Ganga purifies the devout Hindu. How many of those who are thus purified remain purified after they return to their everyday life?  Religion demands that its followers be righteous. Since religion is man-made, it provides ways for man to appear righteous without necessarily becoming so.

READ ALSO  V. P. Singh was meant to be a dreamer, a poet, an artist; It was bad luck he ended up as Prime Minister

Chandrasekhar Rao’s devotion is beyond question. The problem is that he wants the public to pay for his private faith. The gold ornaments he offered at Tirupathi should have been financed by himself and his family. Instead, he made the very first meeting of the Telengana Cabinet pass a resolution authorising the State’s Common Good Fund to pay for the gold he offers to temples.

Two issues arise from this mixing of personal interests with public exchequer. The first is the morality of Rao’s donations even by the scripture in which his faith is anchored. The other is the political fallout of an act that revives memories of similar moves by less credible devotees.

The moral issue that Rao’s munificence raises is simple: Can the Lord be pleased only with such ostentatious offerings? The answer is simpler: Kuchela pleased the Lord with nothing more than a handful of beaten rice. The poverty-stricken man was reluctant to go to his childhood friend who had become the king of Dwaraka. Pushed into it by his wife, Kuchela was overwhelmed by Krishna’s love and hospitality. He forgot to say a word about his poverty. But the Lord knew everything and Kuchela returned home to find his hut transformed into a mansion.

It is sincerity of the heart that matters. When desire overtakes devotion, everything changes. Kubera did tapass for 10,000 years hanging upside down in water to force Brahma make him the Lord of Wealth. Brahma did not appear. But Gods had their own obligations. When Kubera continued his tapass, this time standing on one leg in the middle of Panchagni, Brahma had to oblige him. Chandrasekhar Rao’s devotion is akin to Kubera’s, minus the upside-down and the fire.

His golden gift also recalls  the munificence of Janardhana Reddy, the erstwhile Karnataka Minister who was jailed for corruption, presenting a 30-kilogram diamond-studded gold crown worth Rs. 42 crore to Tirupathi in 2009. Those figures offer some interesting sidelights. Compared to Rao’s 5.45 crore, Reddy’s 42 crore looks massive. But compare the 42 crore with the Rs. 550 crore Reddy spent on his daughter’s wedding last November. Compare Rao’s own 5.45 crore with the Rs. 50 crore he spent on his luxury bungalow. Our netas want to buy even their blessings on the cheap.

Janardhana Reddy had kept a replica of the crown at home, wearing it occasionally, for he believed he was a descendant of Krishnadevaraya, Emperor of the Vijayanagara empire. Tirupathi Temple officials thanked Chandrasekhar Rao by comparing him to Emperor Krishnadevaraya. How unique is our democracy: It turns elected leaders into Emperors.