Home » Columns » Abracadabra By K. B. Ganapathy » Gone Away: To Germany & Austria -11: A visit to Dachau Concentration Camp 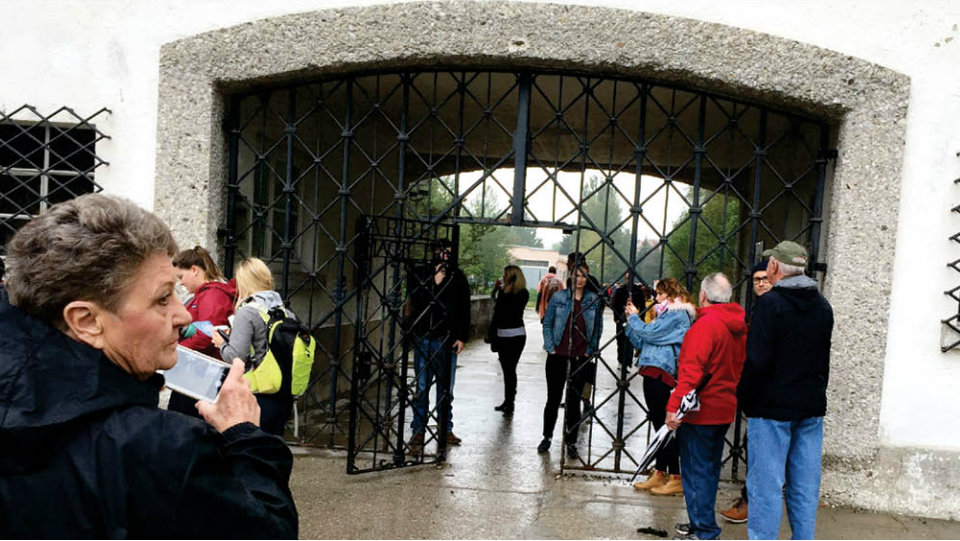 Gone Away: To Germany & Austria -11: A visit to Dachau Concentration Camp

Today’s memorial is a commemorative site to remember the people who suffered in the Dachau Concentration Camp and the 41,500 prisoners who died there. It has the character of a cemetery, a place of sorrow and remembrance. Please support us in our efforts to protect the site by observing a few rules of conduct.” — A display board of request for the visitors.

It happened, therefore it can happen again; this is core of what we have to say.”

…But the seeds of anti-Semitism, racism, disregard of human dignity and democracy had been sown during the preceding period and gained ground after 1933 (when Hitler became Chancellor) with alarming speed.

Each of us today is shaping the background history of tomorrow.”

From the display boards in the Holocaust Museum. 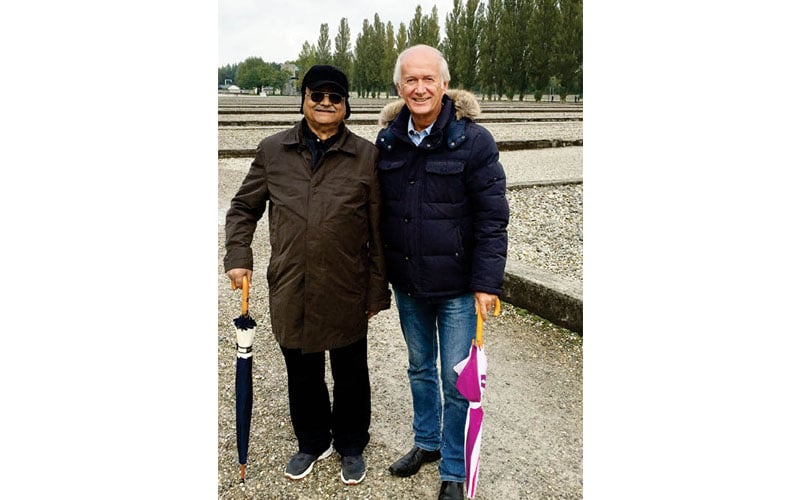 Roland and me at Dachau Concentration Camp with the demolished barracks area in the background.

Reading these texts, I wondered if what is happening in India today too has a background history created by long years of Congress Government.

The present government should learn from the mistakes of the preceding period of rule where policy compromises and appeasements of chosen people are made. Where non-consideration of merit, in appointments, specially in departments responsible for planning and implementation of schemes and projects, became a State policy. Another blunder was in general countenance to corruption calling it “a universal phenomenon.” Ignoring the religious sentiments of the majority people, who were for 600 years ruled by invaders of different religions who desecrated the temples and despised their culture is another reason. These actions of the preceding rulers are now visiting the present NDA rulers.

Some symptoms of these flaws of the preceding governments are now seen, in the present government’s period with the presence of right extremists, just as in US, under Donald J. Trump, where White Supremacists are raising their ugly heads more blatantly. Let it be.

The world had heard much about the Hitler’s Hades of a place called Concentration Camps in Munich and Poland, gas-chambers for mass extermination of minority Jews, Sinti and Roma, with more than 3,000 camps for forced labourers in Berlin alone. 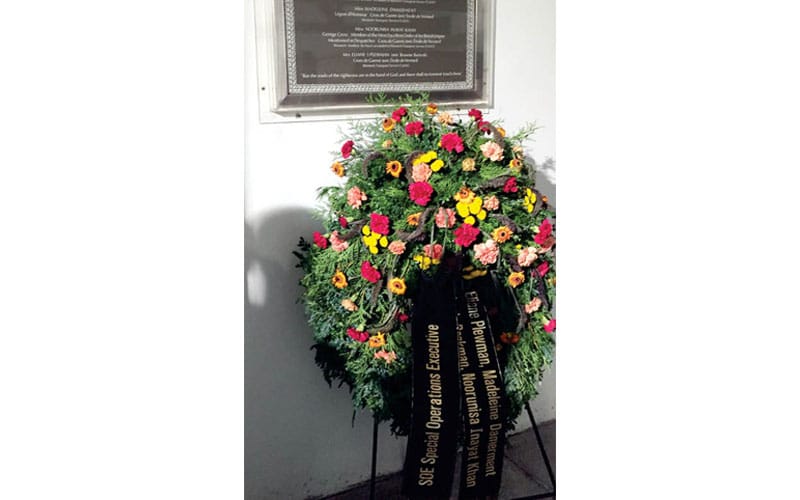 A plaque for the spies who worked for Resistance to Nazi Germany. “An Indian Princess” too was one of them (see the text).

We were told that the most notorious Concentration Camp of Hitler was at Dachau near Munich. The others were in Poland. When Nazi Germany annexed part of Poland (the other half went to Russia under an agreement) there came up Auschwitz concentration camps I, II and III — prison, extermination camp and labour respectively.

I was keen on a visit to Dachau about 16 km (10 miles) from  Munich in the State of Bavaria, south of Germany. So we took a train and headed to Dachau. As could be expected, there was a professional guide — a human tape recorder. The door of the prison cell with a barred mini window. Another similar window on the rear wall.

Originally there was an ammunition manufacturing factory here which was abandoned. Later it was turned into a prison camp for political prisoners when Hitler came to power in 1933 and with the ascendance of Nazi Germany, it became a Concentration Camp spread over hundreds of acres.

There were nearly 100 barracks, sub-camps or prisons where prisoners who included Jews, criminal offenders, Roma (Gypsies) homosexuals, trade union workers and in short all those opposed to Nazi Germany. At present only a few barracks and other facilities and buildings are preserved. The rest of hundreds of barracks were demolished but we can see the vestiges of those buildings neatly marked on the ground. Over 10,000 Jews were interned here along with other numbering over 34,000. According to our guide, there were over 32,000 documented deaths in this camp and there might be thousands undocumented.

The camps were liberated by the US forces on 1st of May 1945, after Germany was defeated in the World War II in April that year. We were told that there were 30,000 prisoners at the time of liberation and about 10,000 men were sick and disabled. However, on April  26, 1945, there were 67,665 registered prisoners.

As you saunter around the sombre area you get an eerie, melancholic feeling and for us it was further enhanced by the wet, smoggy climate. The flow of tourists was well regulated to avoid crowding. However, after seeing the place so vast that you can see as far as your eyes can reach, I thought even thousands could be allowed in at one go and yet the camp area will not be crowded. 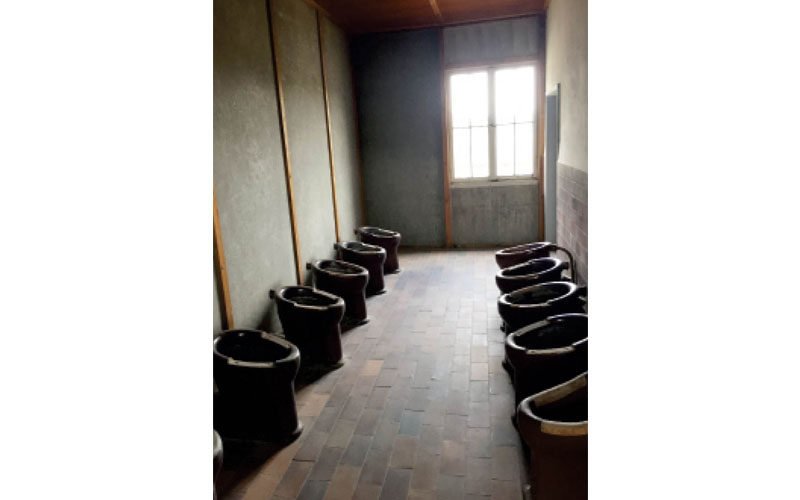 Apart from the barracks with rooms for one, two or three prisoners with a barred aperture for air and natural light, there were supporting buildings like for kitchen, laundry, toilet, showers and workshops. There were gas or electric crematorium also. There was one room where we saw aperture in the ceilings for gas to be released for killing those who were too sick or weak to work — gas chamber. The guide, very vocal and assertive, said the prisoners would be misled to make them enter the gas chamber saying they were entering the chamber for shower. I wondered where was the need for such subterfuge. After all they are prisoners, they could be forced in to the gas chamber. Be that as it may, for extermination there were also the firing ranges and gallows, in the crematoria area, as killing sites for prisoners. 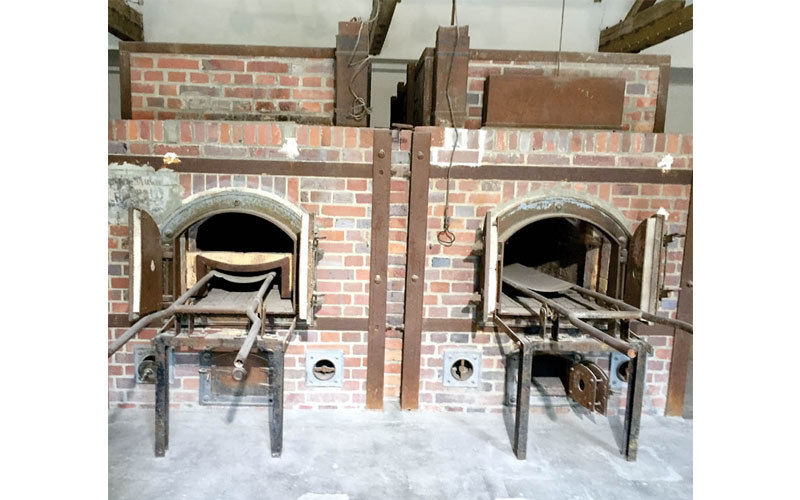 We were told that in Dachau, as in other German camps, German Nazi physicians performed medical experiments, using the prisoners as guinea pigs, on malaria, tuberculosis etc., and experiment new medicine on the prisoners. There was one tablet on the wall in a small hall (see pic.) that commemorated  four women who were killed here for serving the Resistance in France against Nazi Germany. The guide and also my friend Roland were describing one of them, Miss Noorunisa Inayat Khan as the Indian Princess and it interested us naturally. They were killed here on 12th September 1944. Unlucky I thought. If only the execution was delayed by just 8 months, well they would have survived,  I thought. The war ended on 1st April 1945. I was surprised to find fresh flowers kept here that I did not find anywhere in the camp. 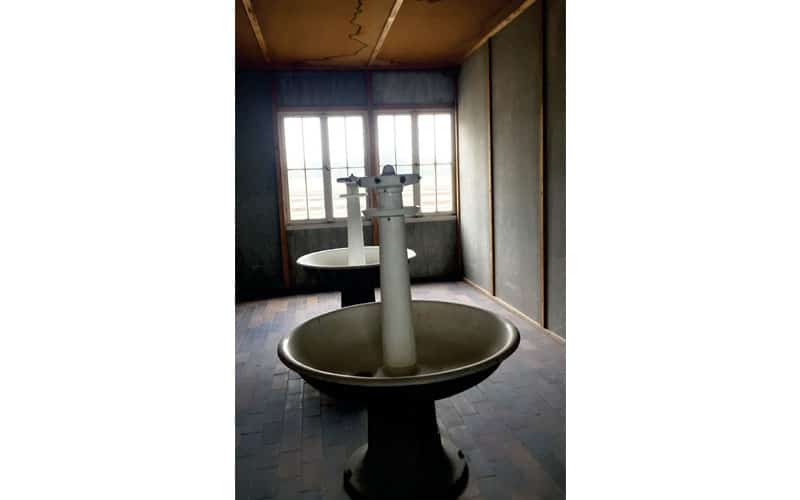 Some pictures published here will speak the truth about Dachau. 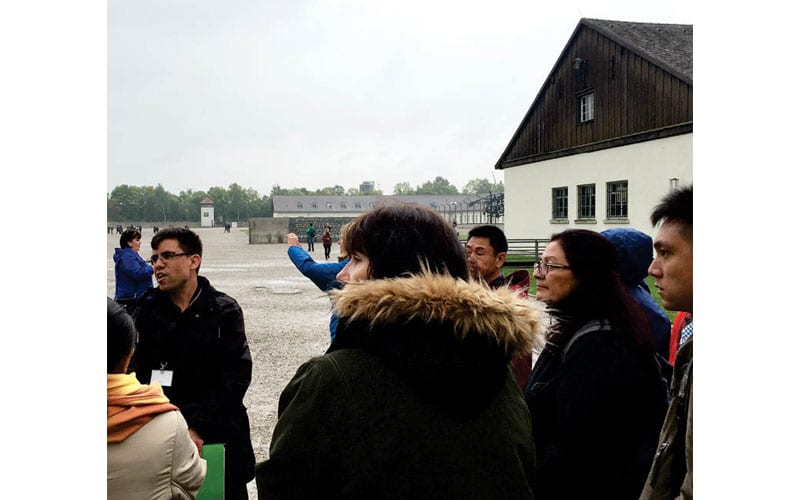 Our guide is seen going eloquent with his description of the camp.

Later that evening we went by train to our friend Roland’s house in a village about 25 km from Munich surrounded by agricultural farms. As we alighted from the train and got into his car, we wanted to buy some flowers. Yes, no problem. Roland stopped the BMW at a spot by the roadside, next to a farm. There were some vegetables dumped on the ground and some on wooden racks and there was a flower garden. Our ladies cut some gladiolus etc. How to make the payment and to whom? No problem. It is a matter of absolute trust. There was a price list and a box for the coins or notes. 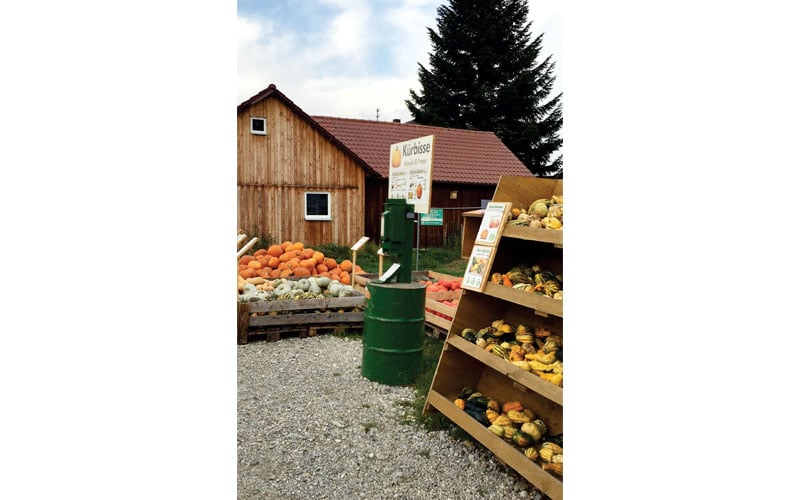 We had sumptuous heavy dinner over mugs of beer and left for the last train that would take us back to Munich.

The following day we returned to our heaven — Mysuru. 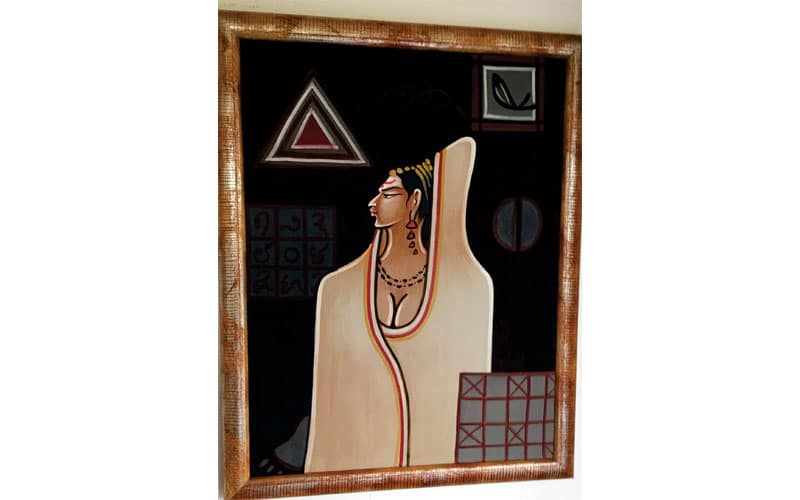 When Roland was in Mysuru as my guest, I presented this painting of the artist Ganjifa Raghupathi Bhat. I saw it hanging on the wall of his dining hall with an expensive frame he got made from Munich after three visits for selection and approval at a cost that was more than what I paid for it.

ABRACADABRA Gone Away: To Germany & Austria K.B. Ganapathy
‘Mastakabhisheka’ at Aretippur
We are not pseudo-secularists, Minister Anant Kumar Hegde