Home » Columns » Abracadabra By K. B. Ganapathy » Gone Away: To Germany & Austria – 3: A Day Out looking at Down Town Berlin

Gone Away: To Germany & Austria – 3: A Day Out looking at Down Town Berlin

Our Berlin tour guide’s arrival at our hotel in a taxi, a grand Mercedes Benz Van, was conveyed to me from the front desk through intercom promptly. We descended from our fourth-floor room and there he was. Tall, grinning from molar to molar. While shaking hands, we said, “Sorry, we are late” only to be told with another grin, “Oh, never mind. You are from India.” Probably he was giving expression to his experience with Indians as a tourist guide.

It is my experience that every tourist guide, from Rajasthan  to every foreign country I visited, is a chatter-box, voluble, fluent, hence irritating words come from his or her lips in fusillades. You begin to avoid listening preferring to look around, observe and admire. This one is no different. 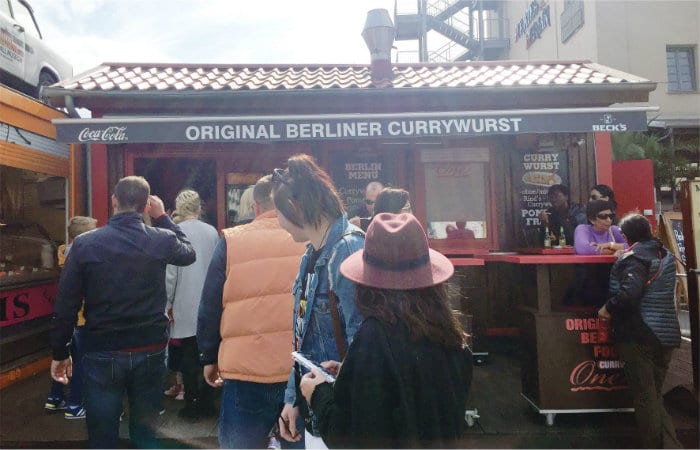 “My name is Thomas. Thomas Williamson. Your Berlin Tour Guide. Call me Tom. Okay. Let us get going.” From this moment till sharp 5.30 that he said goodbye to us, we were shepherded by Tom.

As the vehicle speeded through the roads, Tom’s narration of Berlin’s autobiography went on non-stop till he stopped the vehicle at a building he called Palace. The German names being difficult for a non-German like me, I could not care a damn about its name. Moreover, having seen hundreds of Palaces as a traveller it did not matter.

However, I remember Tom telling us an anecdote in connection with the construction of that Palace. The King had asked his subjects to provide 20,000 eggs to prepare the mortar for constructing the Palace walls in the days when cement was not there. The following day, the King received the eggs alright, but they were boiled eggs!

READ ALSO  Terror attack in J&K What option India has?

This reminded me of another native anecdote about Emperor Akbar The Great, of course, in an unconnected incident but one that shows how, funny or smart, situations may happen while dealing with the subjects leaving the King red-faced.

Emperor Akbar had asked his subjects to get a pot of milk and pour it into a giant cauldron placed in the courtyard of his Palace. In the afternoon, when Akbar went to see the cauldron, there was only water! Every subject who came there to obey the order carried water in the pot thinking his deceit would go unnoticed as others would have poured milk. But then every other person was as deceitful as himself.

Now do we see the difference between a German and an Indian in the above anecdote? I do see. While the German citizens were innocent in bringing the boiled egg for his King, thinking it was for eating, our Indian citizens brought water with the clear intention of duping, hence deceitful.

Please sir, don’t despair we Indians know in time to come if not in this life, in the next life: “We shall overcome” these negative qualities.

Much is spoken about the ‘food problem’ of Indians when in Western countries. The food is bland. Rice is a rarity even in some Indian restaurants. As if to show some mercy on those who desire tangy, hot and sour, Tom drew our attention to Berliner Currywurst roadside kiosk doing brisk business and we had a taste of it. Ha! Not bad. But then hunger is the best sauce! [See. pic. 1]. 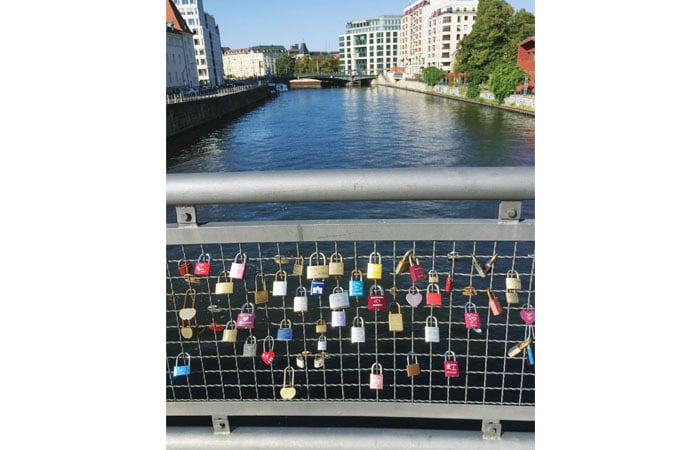 And as we crossed a bridge walking, there it was — manifestation of superstition. Make a wish and put the lock on the barricade on either side of the bridge [See pic. 2]. I remembered a similar sight on the Great Wall of China too and in many parts of the world. Siddharamaiah may bring an Anti-Superstition Bill, but superstitious belief like this will continue — even if the authorities remove such locks or catch the wish-maker. The age of reason and enlightenment is too, too far away.

We were racing towards a very important destination Checkpoint Charlie. [See pic. 3]. A photo-op centre where tourists throng to take pictures with the fake ‘Officers’ now that the Berlin Wall is gone. During the time Germany and Berlin were divided by the Wall, the victorious powers of World War-II (minus Soviet Union) and the two Germanies confronted each other here. It finally narrowed down to a dangerous, unpredictable eyeball-to-eyeball confrontation between USA and USSR with battle tanks ranged against each other. Situation here   then, the point where people crossed over with permission, became so sensitised that CIA had its office on the West Germany side here while the KGB had its office in the East Germany block here.

Germany had hosted the Olympic Games twice — once during Hitler’s time on 1st August 1936 and in 1972 at Munich.

2 COMMENTS ON THIS POST To “Gone Away: To Germany & Austria – 3: A Day Out looking at Down Town Berlin”