Home » Columns » Abracadabra By K. B. Ganapathy » Gone Away: To Germany & Austria – 2: The Berlin Wall 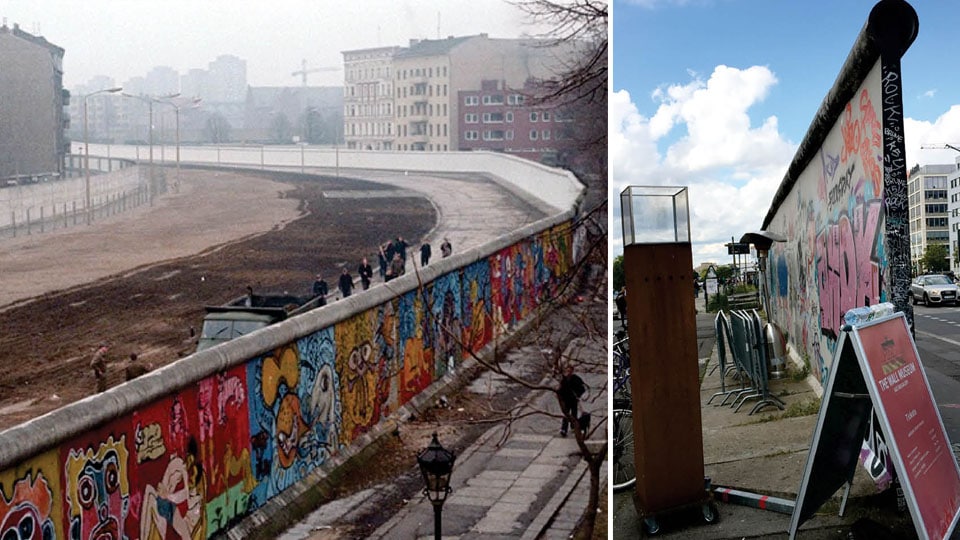 Gone Away: To Germany & Austria – 2: The Berlin Wall

Germany is one country in the world for an Indian that seems to conjure up many images of important persons both in Germany and India. Otto von Bismarck was one such person. It was he who spoke of “blood and iron” and unified Germany as we know today. And in India, we have our own Bismarck in Vallabhbhai Patel, the Deputy Prime Minister in the first Nehru Cabinet immediately after Independence. If Kashmir was a folly, Nehru, not Patel, was responsible, no doubt.

Among the other Indian names, how can we forget Subhas Chandra Bose. Our present Netajis surely owe a debt of gratitude to Bose, who was the first person in our political history to be addressed as Netaji, meaning ‘Leader of Leaders.’ These are, of course, ‘duplicate’ or fake Netajis as we have come to know of their true colours.

Bose had escaped to Hitler’s Germany from the British India in April 1941, met the Führer, the great leader Adolf Hitler and realising the reluctance or refusal on Hitler’s part to set up a ‘Government of India in Exile,’ left for Japan in a German U-Boat. Rest was history that still strikes the chord of our hearts to this day.

There are other two Germans with whom India is connected but each of distinct different persuasion. One is Karl Marx, the German Jew, Father of Communism, who has found a niche in our country at West Bengal and Kerala. The other German was Max Muller, an academician, scholar in India’s sacerdotal language Sanskrit. He translated Upanishads and also the Indian fables called Hitopadesha. He did all his works in English and like Karl Marx never visited India. There is one more German academician, Hermann Hesse, son of two missionaries who worked in India for several years. No wonder he wrote, among other very few books, Siddhartha, not an eponymous title but deals with Buddha’s teachings. Hermann Hesse was awarded Nobel Prize for Literature in 1946. This book was also made into a film — English and Hindi — with Shashi Kapoor [seeking the meaning of life, travels with holy men and explores sensuality with a courtesan, played by Simi Garewal]. So India’s German connections are well-rooted. Visiting two important cities of such a country was simply enthralling for me — the capital city of Berlin and another historic city Munich. 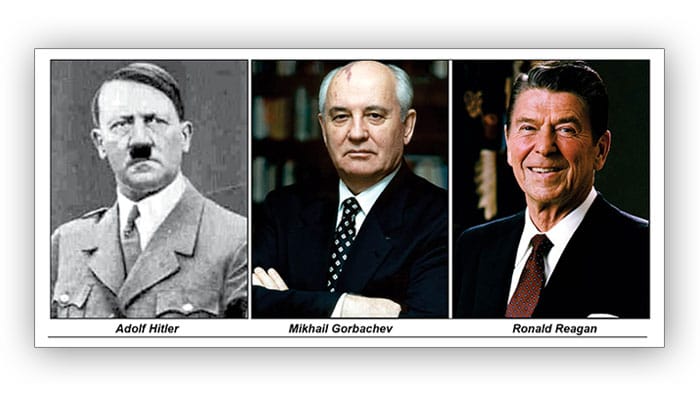 Berlin is more a historical city, being the capital, rather than a cultural one. It is steeped in history, covered with “blood and iron” to quote Bismarck. And a city like this can hardly be covered by a tourist in just three days that I was there. It would be like the six blind-men touching the elephant to find out how the elephant appears. Only in parts such cities could be covered. So it was with Berlin for me.

According to historians, Berlin is a beast — it never brought its rulers any lasting good fortune. It is only after the Berlin Wall fell in the year 1989 and the two Germanies, East and West, were united peace reigned on the city. See, how the present German Chancellor Angela Merkel is celebrating her fourth term despite the omen — immigrants from Islamic countries.

It is one of the paradoxes of history that immediately after the hot war of World War II ended with the Allies — America, Britain, (Communist) Russia — defeating the Axis — Germany, Italy and Japan, the Cold War started between the Allied Powers. The Communist Russia was confronting the US and its Allies in the war. This led to the division of Germany as East (GDR-Communist) and as West (FRG)— US and its allies. Russia made Berlin as its capital though the city too was divided while West Germany had Bonn as its capital.

However, the people from Communist Germany (East Germany), specially from Berlin began to illegally enter West Berlin for economic and family reasons apart from the freedom they could enjoy in a democracy. To end this immigration, the Russians constructed a Wall in 1961 that became infamous as the Berlin Wall. Since then this Berlin Wall had become a tourist attraction. 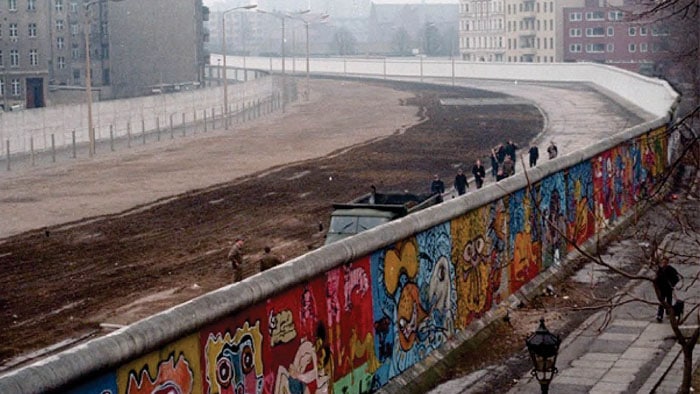 The Berlin Wall then, file photo.

In the year 1989, after 28 years, the Wall came down but it remains a tourist attraction with thousands of visitors thronging to see the remains of the Wall and its Museum. I did not miss the opportunity. The longest vestige of the Wall is by the side of the river and that is where the Museum is. It is also a happening place for loose-foots, picnickers, for enthusiasts in river sports etc., and seemed busy and noisy. Another small length of the Wall is near Hitler’s bunker. For posterity there can be seen a distinct mark made with a band of bricks running all along the demolished Wall — some cover the existing roads, some run over the parks, where the Wall stood for the whole length. 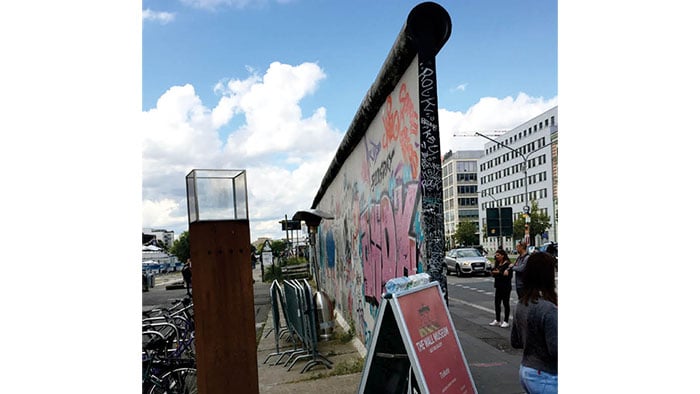 The vestige of the Berlin Wall, a sample for tourists.

Of course, it was Mikhail Gorbachev, the Russian President, who was instrumental in dismantling Communism in the Soviet Union, who changed the German world by bringing down this Wall in 1989 as if obeying the call given by the then American President Ronald Reagan. It may be recalled that when Reagan visited West Germany, he had famously declared in a public speech, “Mr. Gorbachev, tear down this Wall.”

Soon the Wall was torn down. No wonder, Mikhail Gorbachev also famously said, “We need to make everything possible. Even the impossible.”

Today a certain length of this Wall that ran about 23 kms is retained along the river and there is also “The Wall Museum” where you can see a multimedia presentation, a historical sensation that will teach you why you should love Democracy which is Secular: Every human being takes to wings to soar as he pleases in the glorious atmosphere of FREEDOM. Freedom even from the political or religious restrictions.