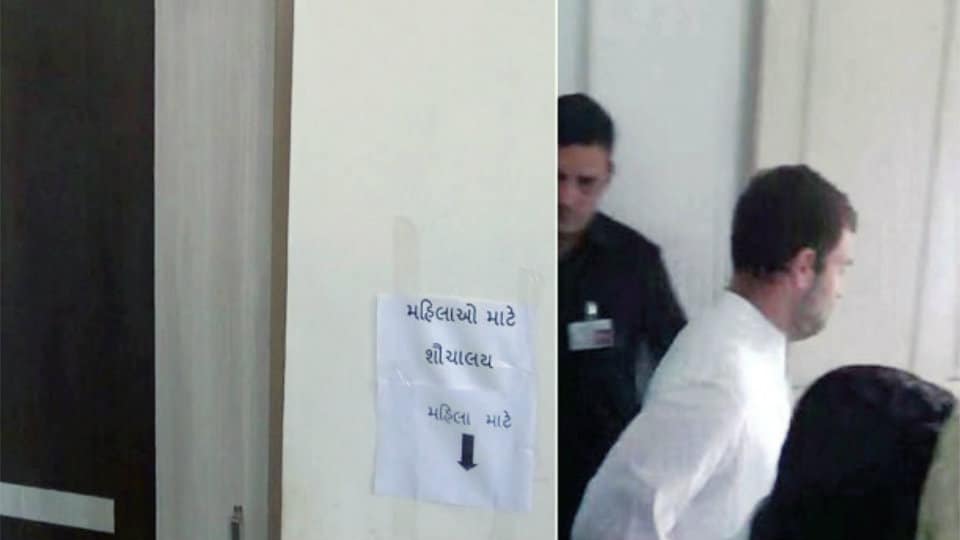 ‘Chhota Udaipur (Gujarat): AICC Vice-President Rahul Gandhi is creating ripples all across Gujarat with his witty one-liners criticising the Modi-Government. His campaign was free of his infamous gaffes until today, when he accidentally entered a ladies’ toilet in Chhota Udaipur district.

Rahul was in the district for his ‘Samvad’ event to interact with young people. After the event, while on his way out of the Town Hall, Rahul Gandhi stepped into the ladies toilet. Incidentally, there was no sign in English differentiating it from the one meant for men. However, there was a poster in Gujarati that read ‘Mahilao Mate Shauchalya’. Sources said that Rahul entered the ladies toilet as he could not read Gujarati.

Following the incident, the SPG that accompanied Rahul dispersed media persons who had gathered outside the toilet on hearing about the blunder. Locals at the venue said that immediately after Rahul came out of the toilet people burst into laughter. The entire scene was recorded by media persons present there. Many women present at the scene took pictures of Rahul coming out of the washroom. Several people took to Twitter to share these pictures.

Incidentally, some years back when Rahul Gandhi was nearing Hunsur via Nagarahole-H.D.Kote Road, his car was stopped near a dilapidated tile factory to urgently facilitate him to ease himself and like the present incident, it made news in the news-hungry newspapers in Mysuru.

Rahul Gandhi
Gone Away: To Germany & Austria – 3: A Day Out looking at Down Town Berlin
Airtel partners with Karbonn Mobiles to take on Reliance Jio phone