Home » Columns » Abracadabra By K. B. Ganapathy » Gone Away: To Germany & Austria – 4: A day out looking for Hitler’s Ghost! 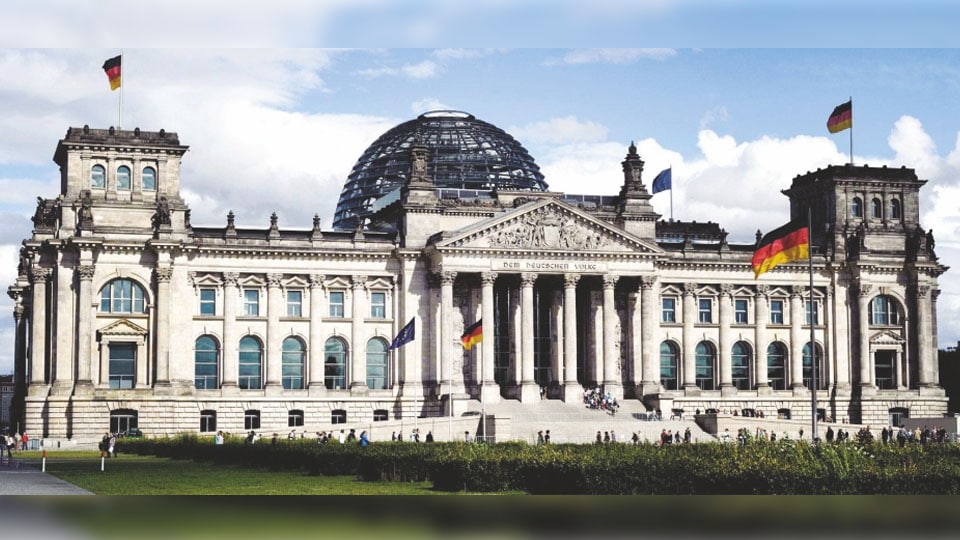 Gone Away: To Germany & Austria – 4: A day out looking for Hitler’s Ghost!

Our guide Tom, as I mentioned, was a chatter-box, saying, what he thought, was funny or a joke. However, he was smart enough to have not only his say but also his way. We wanted to see Berlin Olympic Stadium, the German Parliament Building and, of course, Hitler’s residence and the bunker not knowing these two have been razed to the ground by the Russians a few years after 1945.

We had already visited the iconic  Brandenburg Gate crowned with the beautiful Quadriga (a chariot drawn by four horses) on top the previous evening on a sort of recce. Therefore, it suited Tom to drive past the monument and we did not mind. However, Tom did not forget to give its history.

Quadriga atop the gate portrayed the ‘triumph of peace.’ Peace, however, was stolen away after 12 years of its installation by Napoleon Bonaparte when he invaded Berlin. The victorious Napoleon was so pleased with the beautiful Quadriga he carried it as a war trophy to Paris in 1806. However, this symbol of ‘triumph of peace’ returned to its legitimate owners in 1814 after Napoleon’s defeat in his expansionist  Napoleonic wars.

As we know, Germany became a Republic after World War I. Proclamation of the Republic was to be made at this Gate, but it was not possible as it was damaged in the war. So the Proclamation was made in the nearby Reichstag building (Parliament building). It was built in 1894 a few years before World War I. During the war, in order to enthuse the German people to unitedly fight the war, the dedication “Dem Deutschen Volke” (to the German people) was written in Gothic letters in front above the entrance.

Apparently, this did not work. The Germans lost the World War I and its dome was knocked off in the war and damaged. It was restored with a giant glass dome which is unique and spectacular. Tourists are allowed to climb up to the dome, but need to wait a day, sometimes, to get the required pass or ticket — such rush. One could see people circumambulating up the dome from below or from a distance like ants on the move in a line. (see pic.1)

Looking at the words engraved at the entrance “Dem Deutschen Volke” I was reminded of our State’s second Chief Minister Kengal Hanumanthaiah, the builder of Vidhana Soudha in Bengaluru. He, in his idealistic fantasy, had got engraved at the front entrance in Kannada, like at the Reichstag in Berlin, ಸರ್ಕಾರದ ಕೆಲಸ ದೇವರ ಕೆಲಸ [Government work is God’s work]. The suggestion was that one should work in this Vidhana Soudha with the belief that it is God’s work one is doing, so don’t be corrupt, work honestly.

Poor Hanumanthaiah went overboard on his ethical mirage and wrote at the other entrance, ಧರ್ಮೋ ರಕ್ಷತಿ ರಕ್ಷಿತ: It means that those who protect the truth (righteousness), truth will protect them. Sadly, the Vidhana Soudha has become the “cesspool of corruption,” to use Amitabh Bachchan’s famous words about politics in India. And the Truth is no longer protecting us as we too are guilty of not protecting the truth.

Our next destination was the Olympic Stadium where the Olympic Games were held in August 1936 when Adolf Hitler was the Dictator-Chancellor. Tom says the whole programme was dominated by military ceremonies, including paying tribute to World War I martyrs at the memorial nearby, by Hitler. Being a past master in propaganda, he used the Olympic Games for the purpose though it smacked of racism. The US and Europe wanted to boycott but failed. It was a beautiful stadium (see pics. 2, 3, 4) which we saw from the Bell Tower of World War I Martyrs Memorial nearby.

Later Tom took us to a Russian Martyrs Memorial to commemorate the martyrdom of many Russian soldiers killed in their final assault on Berlin across the only Bridge that survived Hitler’s scorched-earth policy in April 1945. We visited some other places like Churches and Museums and then it was time for lunch. Pic. 3: Rear of the Stadium where the entry is.

Tom was by now overbearing. “If you came to Berlin and not visited KaDeWe, you have not really seen Berlin,” he declared and drove us to the massive mall KaDeWe. He wanted to buy stuff for our lunch and took us to a secluded place in a park, passing by a Beer Garden. Smart guy we thought. Pic. 4: Front view of the Stadium.

We headed to the important tourist sight — “Fuhrer’s Bunker.” Sadly for the tourists this was detonated in December 1947 by Russians. Today all that we see is a notice board by the side of the road with description and details. Both the Chancellery and the Bunker where Hitler married his love and secretary Eva Braun and later committed suicide, were flattened and modern buildings have come up in the place with some open space.

From the signboard we learnt:

From the Bunker Hitler issued the Nero order, the destruction of the very means of existence of the civilian population. With this pointless order, Hitler displayed his contempt for his supposed “Beloved  Germany.”

In the garden of the Reichs Chancellery about 50 “men” assembled, a mixed bag of Hitler youth and members of the SS division “Frundsberg,” who in their desperation had attacked approaching Soviet tanks. In the presence of cameramen and photographers from the Wochenschau News, who documented the “Fuhrer’s last public appearance.” Hitler awarded these men with the Iron Cross for their heroic deeds in the securing of the defence of Berlin. Afterwards  Hitler descended the steps into the Bunker. Wrongly the event was dated for a long time as April 20th, 1945.

Hitler “celebrated” his 56th birthday at the Bunker. For the annual reception, the most important National Socialist functionaries of the severely shrunken Reich gathered to congratulate their “Fuhrer.”

During afternoon, Hitler and his wife Eva (born Braun), who had married not long before in the bunker, committed suicide. Their bodies were then burned in the garden in front of the bunker entrance. The Goebbel’s children died at the hand of their mother shortly afterwards. As the next day began, Joseph Goebbels (the propaganda Minister, recently named Chancellor) and his wife also killed themselves. With that, WW 2 in Europe, with its over 55 million dead, basically came to its end.

ONE COMMENT ON THIS POST To “Gone Away: To Germany & Austria – 4: A day out looking for Hitler’s Ghost!”