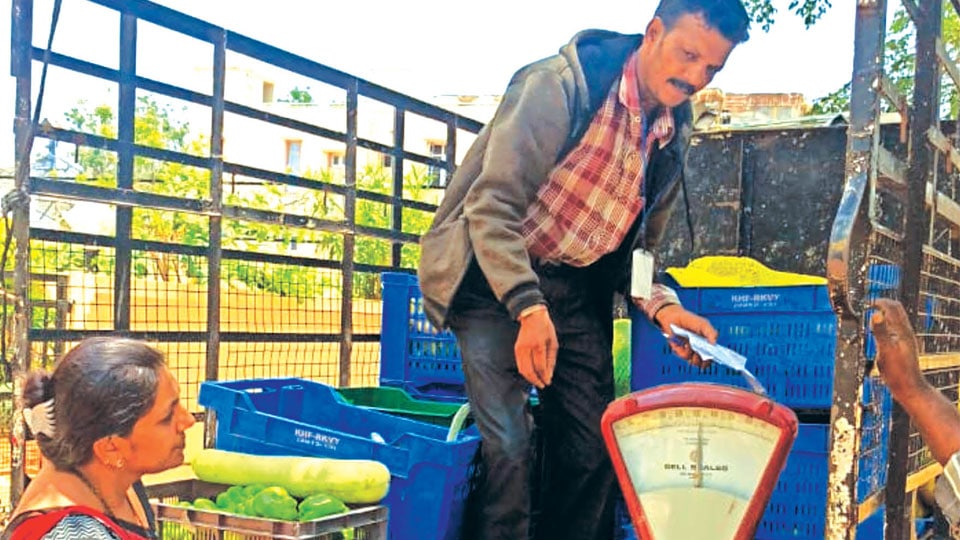 Good response for home delivery of fruits and vegetables

Mysore/Mysuru: ‘Mane-Manege Hannu Haagu Tarakari’, an initiative undertaken jointly by the MCC and the Horticulture Department for home delivery of vegetables and fruits, drew good response from the citizens today. The initiative, that covers all 65 wards of the MCC, was launched by District-In charge Minister V. Somanna yesterday.

Speaking to Star of Mysore, MCC’s City Planning Officer Jaisimha, who is in-charge of the initiative, said that eight vehicles were deployed today. All the vehicles will be loaded at the HOPCOMS outlet in Curzon Park premises, adjacent to the City Bus stand, from where they will travel on designated routes.

The MCC is delivering fresh fruits and vegetables to the people at reasonable prices at  the safety of their homes, he said. Noting that most people were taken unawares by the MCC’s home delivery move, he said that from tomorrow, announcement will be made through a public address system  even as the vehicle passes through a locality.

Meanwhile, all the 68 HOPCOMS outlets in the city will function as usual and people can buy fruits and vegetables as per their requirement by maintaining social distance while standing in queues.