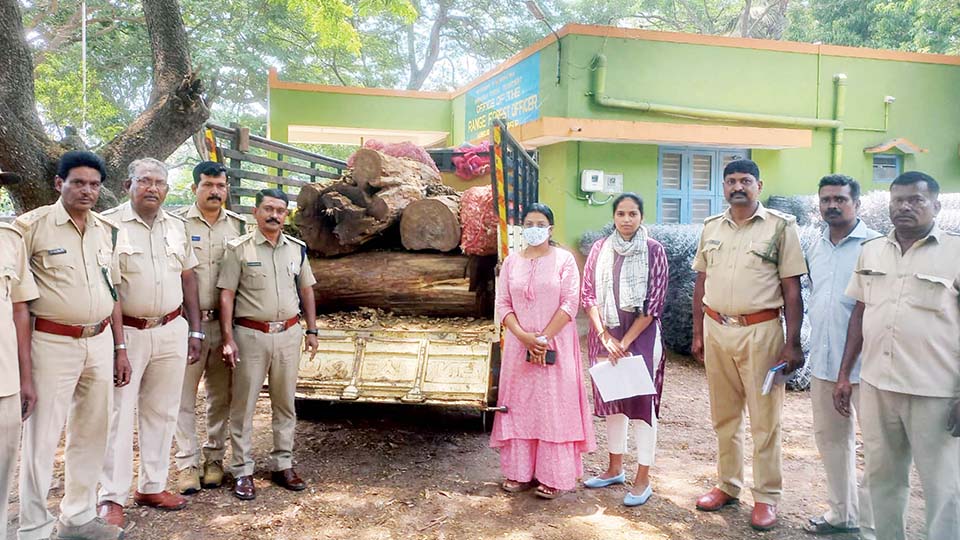 Hunsur: Acting on a tip off, the Forest Department personnel have seized a goods mini lorry near Nellurpala in Hunsur taluk which was illegally transporting logs of rose wood (beete tree) in the wee hours of Thursday.

Details: Following an information that seven logs of rose wood was being illegally transported from Gaddehalla in Suntikoppa of Kodagu to Kerala via Balele in a goods mini lorry by covering it with sacks of ginger, RFO Nandakumar and team had put up near Nellurpala. The team which noticed a goods mini lorry carrying ginger at around 2 am on Thursday, followed the same and stopped the vehicle when the driver escaped from the scene leaving behind the vehicle, said DCF Seema.

Rs. 8 lakh worth tree logs and vehicle has been seized in the operation and it has been found that the vehicle is registered in the name of Harish Kumar of Chattimani of Shuntikoppa, confirmed RFO Nandakumar.

Now, suspicion has raised as to how the goods mini lorry passed through Kushalnagar Forest check-post in Kodagu by hoodwinking Forest Dept. personnel. Sources said similar incident of illegal transportation of Beete Tree in a lorry is said to have happened two months back.