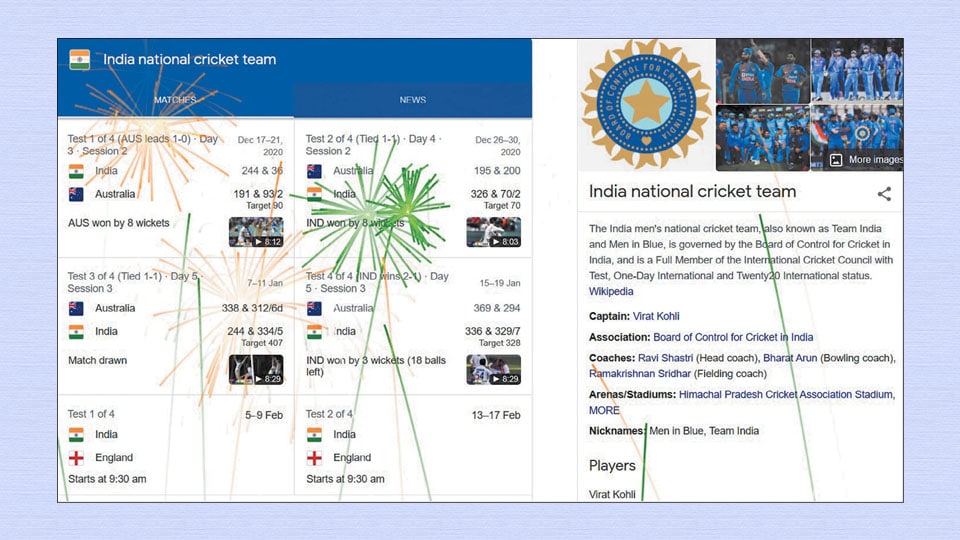 Just type ‘Indian Cricket Team’ in the search bar and a surprise awaits you !

Google, as you might know, treats us with hidden Easter eggs on its search engine to celebrate occasions or events that impact the masses. And now, the Mountain View-based tech giant is celebrating India’s historic win against Australia at the Gabba to retain the Border-Gavaskar trophy. Google Search has a cool surprise in store for us.

Google has created a fireworks animation that plays on its search engine when you search for “Indian National Cricket Team” all this week. This animation was added by Google to celebrate the historic victory of India over Australia at the Brisbane Cricket Ground, also known as the Gabba. Though it is always pleasant to see India win test matches, this one was pretty special due to a number of factors.

First, the Australian Cricket team has never lost against any team at the Gabba in the last 32 years. The last team to defeat Australia in Brisbane was West Indies and it was way back in 1988. Moreover, the Indian team was missing many of its regular players, including Captain Virat Kohli, due to injuries and fatigue. However, that did not stop the Indian players to grab the legendary victory over Australia in their own fortress.

Though the odds were not in India’s favour as the target was high and chase was difficult, the players finished the series with a win beating Australia and settling the leader-board at 2-1 (India-Australia). So, to celebrate this memorable win, Google shows fireworks over the search results when you search for “Indian National Cricket Team” or simply “Indian cricket team.”

The fireworks are shown in the colours of the Indian National flag, popping off in various areas of the screen. The celebratory animation works both on the web platform, as well as on the Google app on iOS and Android devices. Following the addition of this animation, Google shared a tweet to let Indian users know about the “surprise” on its search engine

Even Google CEO, Sundar Pichai was quick to congratulate Indian team on their win. Pichai himself is a cricket fan and being a native of India made the cricket team’s victory even more special for the Google CEO. We can say he was the one who came up with the ‘fireworks’ idea.“One of the greatest Test series wins ever. Congrats India and well played Australia, what a series #INDvsAUS,” tweeted Pichai.