Nanjangud: Thousands of devotees from across the State witnessed Adijagadguru Shivayagogigala Maharathotsava at Suttur in the taluk yesterday. Speaking after dedicating the new chariot on the occasion, Governor Vajubhai R. Vala said that India is home to many religions and peace & harmony co-exist in the country.

Pointing out that we should see the greatness of every religion, Vala said that Sri Shivarathri Rajendra Swamiji built the JSS Institution with the motto ‘Humanity is the greatest of all religions.’

Lauding the JSS Institutions, the Governor said that ‘Annadasoha’ aimed at providing food to the masses, was a unique initiative of its kind, which has to be emulated elsewhere.

Observing that the people of our country were more capable than people of developed nations, Vala highlighted the role of Mutts in promoting peace, harmony, equality and humanity.

The Governor ended his speech, by raising ‘Bharat Mata Ki Jai’ slogan three times, with the huge gathering joining him in the chorus.

The 55 feet tall new chariot, weighing over 45 tonnes and built at a cost of Rs. 2 crore, was the main attraction this time. The Car Festival (Rathotsava) was celebrated with religious fervour and grandeur, accompanied by folk and cultural tropes. 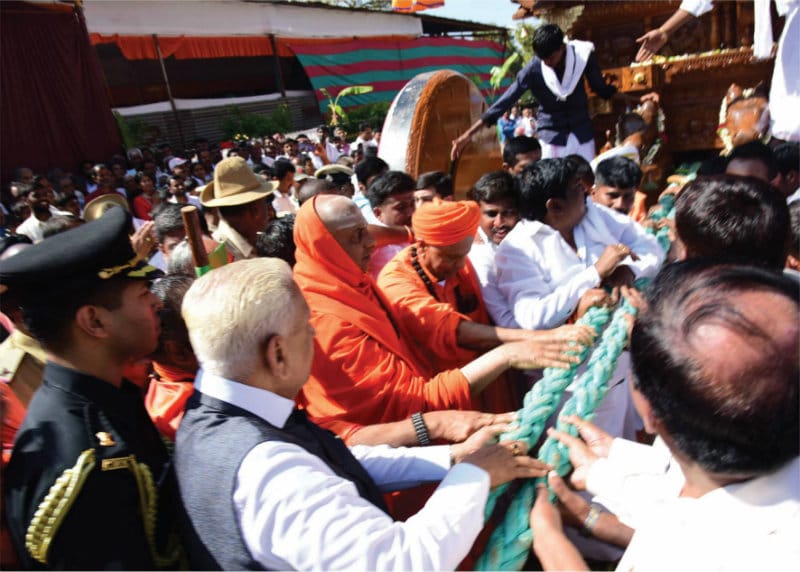 Governor Vajubhai R. Vala along with Suttur Seer Sri Shivarathri Deshikendra Swamiji and others, pulling the Chariot during the Maharathotsava.

Seers from various Mutts and religious centres offered floral tributes to the idol of Sri Shivayogi and pulled the rope heralding the Festival. The chariot retuned to its original position covering a distance of about 1.5 km.

A few tableaus were also taken out on the occasion. Later in the evening, Maharudraabhisheka and Veerabhadreshwara Kondotsava were held.

The new chariot is sculpted by Basavaraj Badiger, a fourth generation sculptor from a family which is engaged in chariot building for centuries.

The new chariot is built using six wood varieties, including Sandal and Teak. Names of all the 24 Pontiffs of Suttur Mutt have been carved on this chariot and the idol of Sri Shivayogi Swamiji is also installed inside the chariot.

The chariot which took nearly two years to build, has been built according to Dhwaja Alaya and has five faces.

Another highlight of the chariot is that it has in-built hydraulic brakes, metal wheels, axle and a turning system, making it safe.