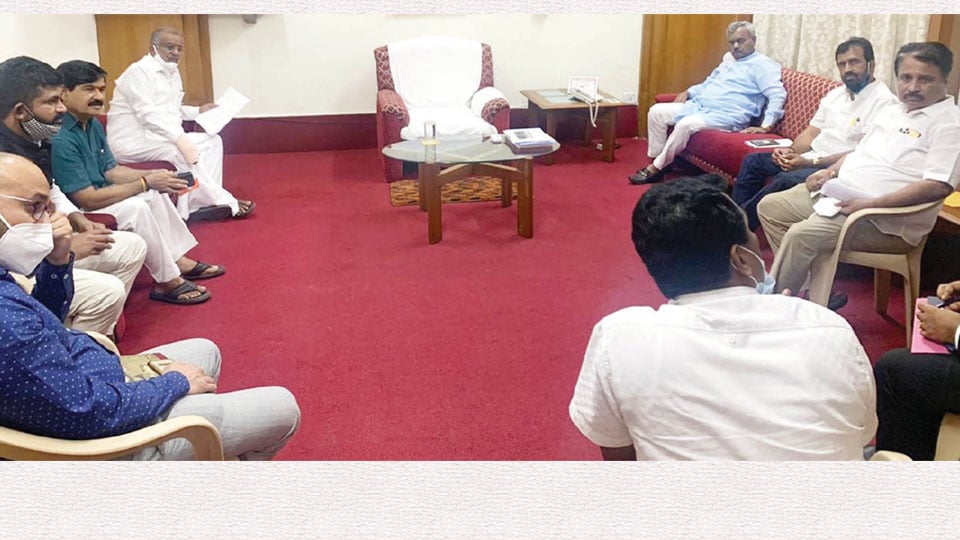 After the Dasara High Power Committee Meeting held at Vidhana Soudha in Bengaluru, Mysuru District Minister S.T. Somashekar closeted with the elected representatives and the officials to take forward the long-pending upgradation proposal.

The meeting took note of the rapid growth of Mysuru on all the sides and the need to upgrade the Urban Local Body (ULB) as Greater Mysuru in view of overall development of the city by expanding its jurisdiction as well as to provide infrastructure.

According to information available, discussion was held regarding inclusion of villages attached to the city and the newly-developed villages into the City Corporation limits to increase the area of Mysuru.

The meeting also seriously considered whether it was possible to cancel election to those Gram Panchayats (GPs) which are identified to be merged into the Corporation. It was decided to apprise Chief Minister B.S. Yediyurappa before taking a final decision.

It may be recalled the then District Minister V. Somanna, after inspecting the development works atop Chamundi Hill in February 2020,  had said that the ‘Greater Mysuru’ concept would be a reality soon. Somanna had said that two years ago a survey was carried out by MCC on expanding its limits as many GPs have failed to address the civic issues.

In 2012-13, a proposal was mooted for formation of ‘Greater Mysuru’ by bringing 110 villages into Corporation limits and in October 2017, the MCC had carried out a survey in 44 villages around the city.  Presently, MCC’s jurisdiction is restricted to 128.4 sq km area falling within the Outer Ring Road (ORR). Several new residential layouts approved by Mysuru Urban Development Authority (MUDA) fall outside MCC’s limits.

Mysuru-Kodagu MP Pratap Simha, who batted for expanding MCC by including the developed areas falling under the GPs, had met Somanna and urged him to provide better amenities in these GPs. With the city growing at a fast pace, GPs such as Alanahalli, Hanchya, Kadakola, Rammanahalli, Hosahundi, Devalapura, Srirampura, Jayapura, Bogadi, Hinkal, Koorgalli, Yelwal and Siddalingapura have become developed areas, the MP argued.

The boundary of MCC was earlier fixed on Oct. 18, 1995, according to Karnataka Municipal Corporation Act 1976. Even after several years of drawing the boundary, the city is growing by leaps and bounds, forcing the civic body to attend to the needs of localities situated near its boundary.

Of the 41 villages identified to be included in MCC, 11 have already become a part of MCC with the latter providing drinking water facilities. They are: Chamundi Hill, Kesare, Kurubarahalli, Hebbal, Dattagalli, Alanahalli, Srirampura, Metagalli, Rammanahalli, Hootagalli and Hinkal.

The revenue coming to the GPs too had gone up substantially and it has become imperative for the authorities to include these areas in the limits of MCC so that better civic amenities could be provided in the areas, the MP had told the Minister.