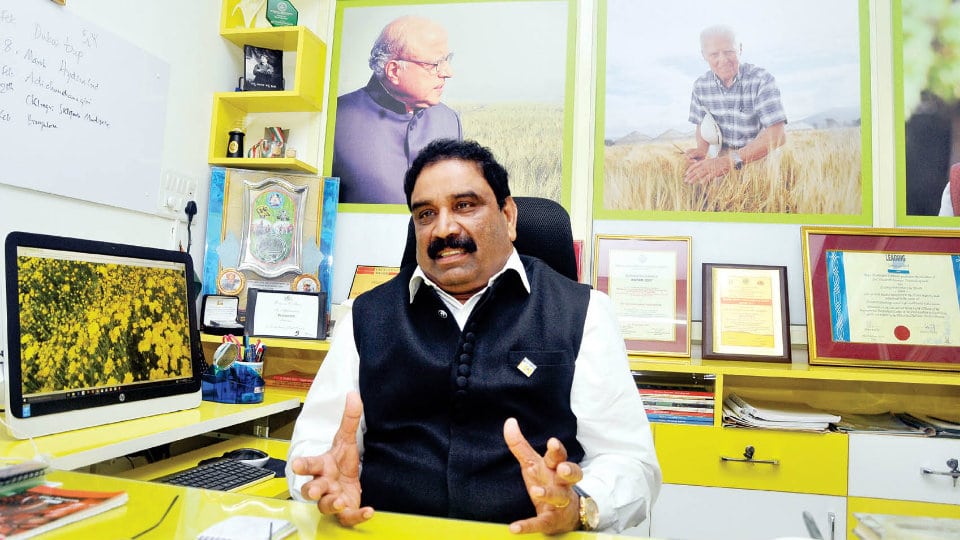 If there is one issue that is gripping the country, it is the farmers and their problems. If there is one expert in Mysuru, who is an authority on farmers’ problems, it is Dr. Vasanth Kumar Thimakapura, who is an internationally-recognised agriculture scientist and social entrepreneur who runs Green Life Science Technologies.

Star of Mysore Features Editor N. Niranjan Nikam caught up with this Agripreneur and discussed at length about the ills plaguing the farmers, why is he a votary of GM crops, the uses and misuses of chemical fertilisers and the way forward for farmers.  Excerpts…

SOM: How do you feel when so much is happening in and around the farming community in India?

Vasanth Thimakapura: I feel bad for farmers because when there was food even for food producers, there were no farmer suicides. But when the country is feeding 1.3 billion people, farmers are in deep distress. When we got freedom, it was only political. We had only 33 crore people at that time and in 1968 when the population went up to 50 crore, we had plenty of land, fertile soil, normal monsoon. But we still could not feed all.

Hence, our rulers went with begging bowls especially to the US and they donated wheat, maize and jowar to us and it was called ‘ship-to-mouth situation.’ The then Prime Minister Indira Gandhi took a serious decision to improve food production. She called M.S. Swaminathan and requested him to do the best in agriculture, not only to produce enough food but also have buffer stock.

SOM: Governments are resorting to loan waivers to appease farmers. How correct is this approach?

Thimakapura: Loan waiver is only a temporary solution. In the context of continuing drought situation and low prices, it is the duty of the government to lift farmers out of distress.

SOM: There is lot of talk about minimum support price (MSP). But MSP is often less than the cost of production. A farmer in Haryana was forced to sell 40 quintals of potatoes at just 9 paise a kg. Can it get more appalling than this?

Thimakapura: This is ridiculous because there is a demand for potatoes. If there is surplus in one State, there will be demand in some other States and we should have proper distribution system to see that supply and demand situation is met. It is important to have proper storage to move the supply to demand areas.

SOM: You are a strong advocate of GM crops. You give the example of not a single instance of allergic reaction after consuming Genetically-Modified crops in the US in the last 20 years.

Thimakapura: These crops are the same crops which have got additional characteristics. Take for example the famous Mysuru Eerengere Badanekai. If we add BT genes it will become BT brinjal. However, what people think is that it is entirely different. Actually, we are introducing a particularly desirable gene to a different existing variety. These genes give additional protection to crops. It will not change or cause harm to consumer or environment. In the US, suppose these gene crops were causing harm or allergies, a majority of multinational companies should have been closed by now.

SOM: It is said big corporations are favoured, farmers are robbed in GM crops.

Thimakapura: It is absolutely wrong because farmers are the final judges. If they price it exorbitantly and if the farmer does not get cost benefit ratio, he will simply discontinue using that seed from next year. In fact, GM crop has given 100 times more yield.

In India, BT cotton was released in 2002. Today, 95 per cent of cotton grown is BT cotton and India which was a major importer of cotton has now become an exporter. 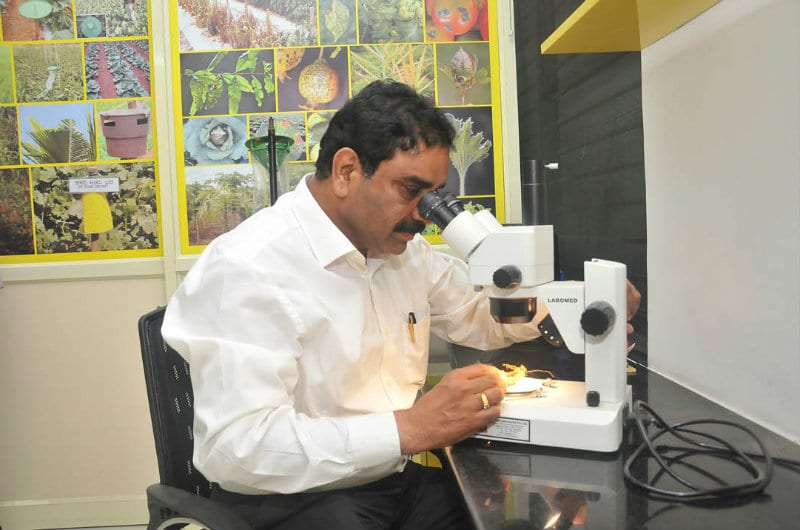 SOM: You talk about BT cotton and BT brinjal which is strongly opposed. What is your argument in support of this?

Thimakapura: Opponents oppose only for the sake of opposing. They have no scientific basis. At any point of time, there will be a group to oppose. Even for BT cotton opponents have said when cattle or sheep feed on the leaf they die and even women miss menstruation. If these were true then how farmers would have continued with the technology? Opponents are highly articulate and vociferous whereas the scientists are not. This is how their arguments look convincing. If you are a true scientist, you can talk, if there is scientific evidence. But for these people no evidence is required.

SOM: Is it not true that the health of the soil is deteriorating by using chemical fertilisers?

Thimakapura: Fertilisers and chemicals are being abused, misused and overused. Now the generation of cultivators has changed. The generation during the early Green Revolution days was hard working and even the agriculture department was duty-minded and officials used to visit villages regularly educating and training farmers on the proper use of new technologies. The present generation of farmers are not trying to get the right information from departments. Due to improper and half knowledge and also over-enthusiasm to get more from his crop, he is using chemical fertilisers indiscriminately. Added to that, government subsidies on fertilisers have encouraged them to use more of urea instead of nutrients.

READ ALSO  They put out FIRE even as their own houses are on FIRE!

Nitrogen fertiliser, when used in excess, increases susceptibility to pests and diseases. The ill-effects of chemical fertilisers have been compounded by not using organic manure or compost. This has resulted in depletion of fertilisers and beneficial microbes in soil. Had we used in balance, it could have been more sustainable. We can reduce chemicals by proper education but we cannot eliminate them as we have to feed the present population.

SOM: Organic farming is the buzz word today. What is your take on it?

Thimakapura: Until Green Revolution, our fathers and forefathers practiced only organic farming. But unfortunately it did not have the capacity to feed the ever-increasing population. If anybody wants to do organic farming and eat organic food, that is their right. But selling their produce at a huge cost as a marketing strategy is wrong and misleading. And it is impossible for any country to feed with organic cultivation. Organic produce are not easily available and not at all affordable by common man. And there is no guarantee that they are all organic. A few may be genuine, certainly not all of them.

SOM: Governments have rarely come to farmers’ rescue. The Finance Minister promises to monitor fall in stock market prices. Have we ever seen a Finance or Agriculture Minister monitoring the deplorable condition of farmers when prices crash?

Thimakapura: I do not want to comment because I am not the right person. However, I would like to point out here that all the activists demand scientific pricing for farmers. Nobody demands knowledge of scientific farming.

Farmers should be able to grow scientifically and in a sustainable manner and then only will the scientific pricing have a meaning. And government should immediately implement Dr. Swaminathan’s report about price fixation and removal of middleman because he is the one who is taking away all the profits. In the entire food supply system, farmer is one of the components. But when the crops fail, only he takes the brunt.

SOM: Will farmers ever see the light at the end of the tunnel?

Thimakapura: Only if the whole society shows concern about farmers and gives him a status that he richly deserves.  What he deserves is the support of the government, NGOs, corporations and their CSR activities. Even spiritual leaders can play a major role in reducing the farmers’ mental stress and suicidal tendencies. Everyone who eats forgets about the farmer. The farmer should also say, “I am proud to be a farmer.”