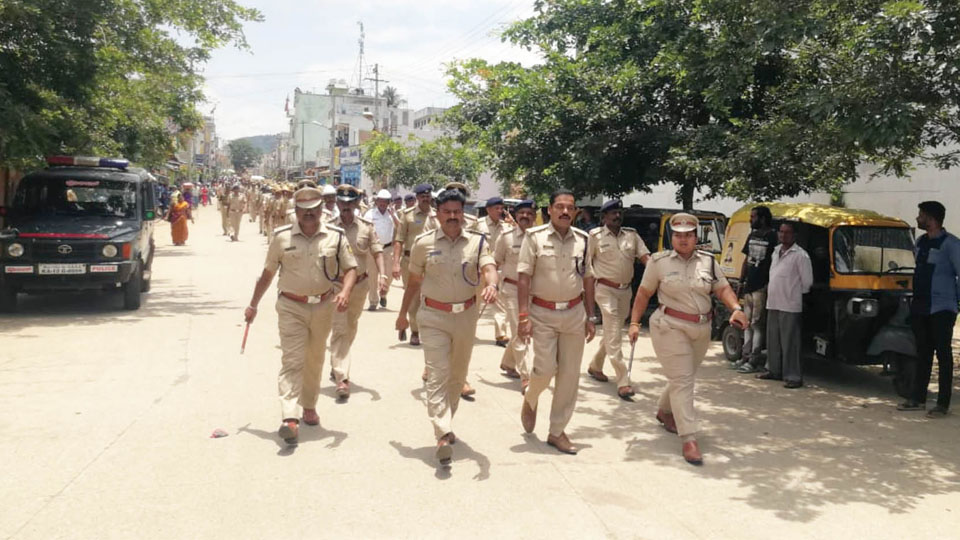 Chamarajanagar: Following clashes between two groups over an issue pertaining to bicycle wheelie on Saturday and the Police resorting to mild lathi charge to disperse the crowd, Chamarajanagar Police, led by Superintendent of Police (SP) T.P. Shivakumar, took out a route march in the town yesterday morning. Over a 100 Police personnel took out the route march on prominent roads in the town.

The SP said that six persons (three persons from each group) have been taken into custody for questioning.

He said that a 15-year-old youth who was doing wheelie on a bicycle, hit another youth belonging to another community, which resulted in a fight between two groups. “Leaders of both the communities have been urged to maintain peace. Police personnel have been deployed at various places in the town to prevent any untoward incidents and the town is peaceful now,” he said adding that a case has been registered and urged the public not to heed to rumours.

It may be recalled that on Saturday, a youth, who was doing wheelie on his bicycle hit another youth in the process resulting wordy duel between them. It is learnt that the youth who was hit by the bicycle brought a few people to the spot and a fight broke out between the two groups.

Police, who rushed to the spot, resorted to mild lathi charge and dispersed the warring groups and had deployed additional Police force on Saturday night and senior Police officials conducted beats across the town.