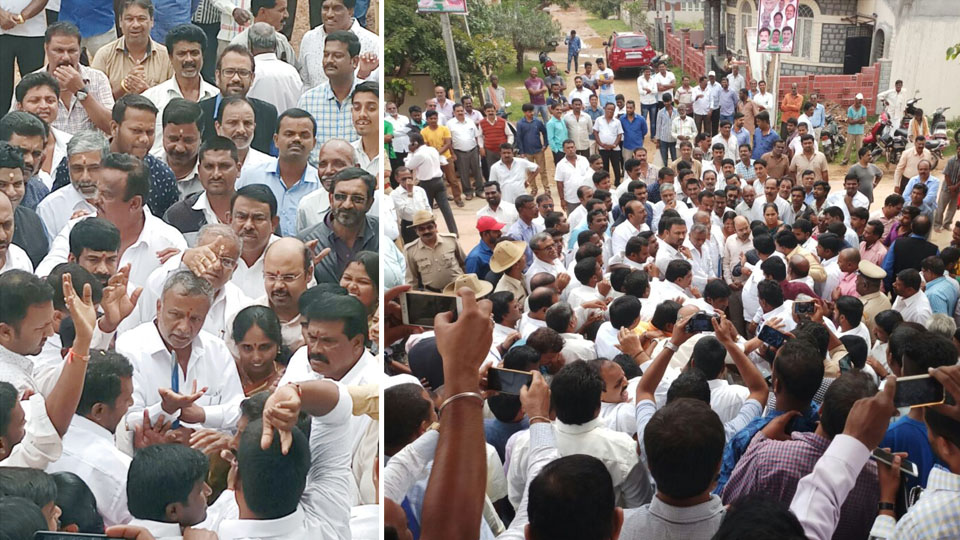 GTD and CM supporters clash in a war of words

Mysuru: As if a prelude to the shape of electoral battle to come next year in the Chamundeshwari constituency, an incident of a minor clash between JD(S) and Congress workers took place at Giridarshini Layout in city, this morning. The clash took place during the guddali puja for Rs. 1 crore worth UGD works taken up by MUDA at Giridarshini Layout near Alanahalli in city when some JD(S) and Congress workers dragged and pushed each other in the presence of CM’s son Dr. Yathindra Siddharamaiah, JD(S) MLA G.T. Devegowda and MUDA Chairman D. Dhruvakumar. It all happened when GTD supporters shouted slogans in support of the Chamundeshwari MLA.

Immediately, the Congress activists, who had also assembled at the venue, countered them by raising slogans in support of CM Siddharamaiah. Following this, the situation turned violent as supporters of both the leaders entered into wordy duel and manhandled each other.

On sensing trouble, Dhruvakumar managed to pacify Congress workers and requested GTD to control the JD(S) supporters only after which the guddali puja was performed.