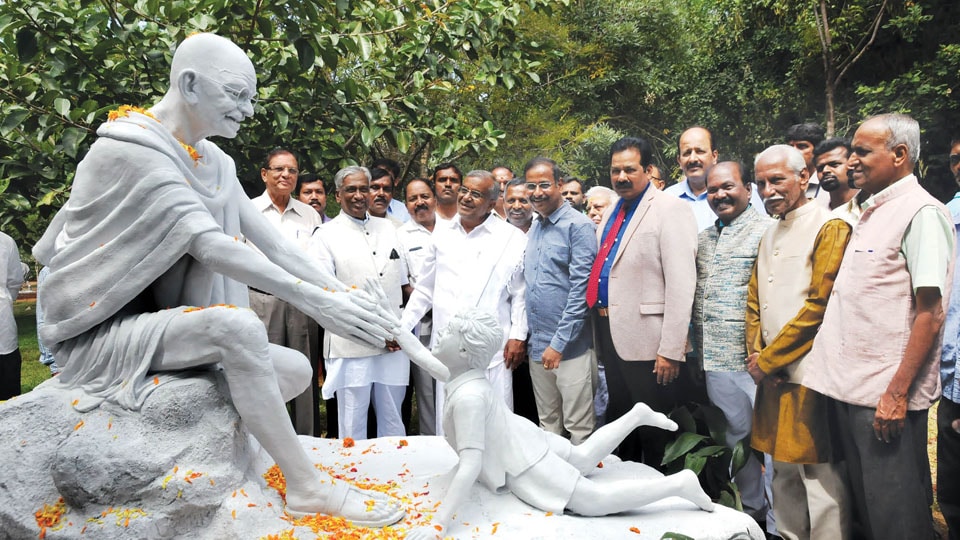 Mysuru: Higher Education and District Minister G.T. Devegowda (GTD) dedicated nine statues of Mahatma Gandhi along with other people installed at the five-acre Gandhi Bhavan in Manasagangothri to city here this morning.

The dedication function of the cement sculptures on Gandhiji was jointly organised by Kannada and Culture Department, Karnataka Shilpakala Academy, Rangayana and Centre for Gandhian Studies, Gandhi Bhavan, University of Mysore.

GTD, who was also savouring the victory of his party in a few of the constituencies after the by-polls results were announced, was all in awe of the inspiring works done by 34 sculptors at the workshop in just 15 days.

There are many firsts that has been created in the Sculpture Workshop led by Workshop Director K.K. Narayan Rao which has not been done anywhere in the country or in the world. This includes the world’s tallest statue of Bapu with a young girl, Gandhiji-Kasturba and Mahatma-Tagore sitting together. As the statues are made out of cement, they will be cured with water for about three months and then silver colour paint will be uniformly applied to all of them.