Home » Voice of The Reader » GTN, a legend and a luminary 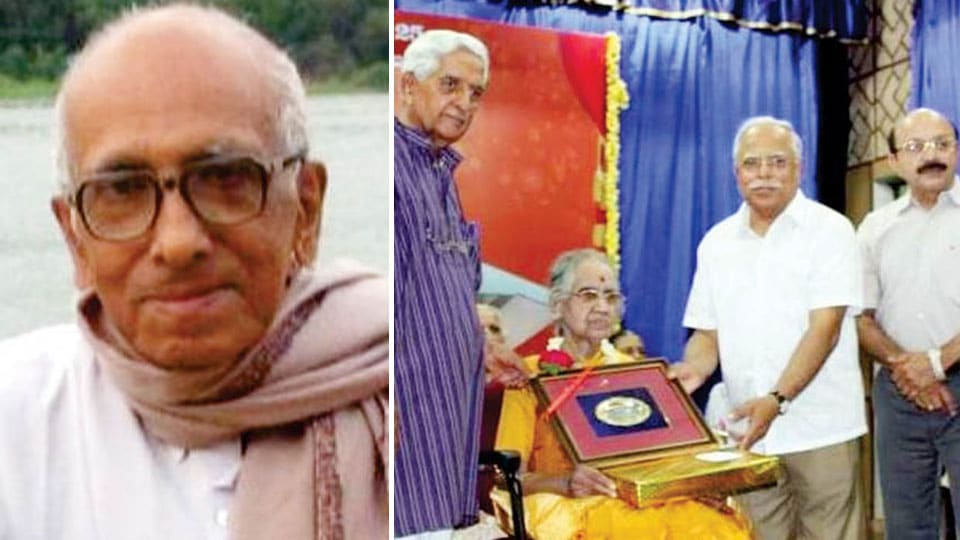 GTN, a legend and a luminary

KBG’s  ‘Nostalgically Speaking-8’ write-up on Prof. G.T. Narayana Rao in SOM dated Sept.6, 2020, has prompted me to write about my association with him since 1975. He joined our team of Ganabharathi as Committee Member in 1980 when I was the Vice-President.

Guddehittalu Thimmappaiah Narayana Rao, GTN as he was popularly called, after his early education in Madikeri and Mangalore passed MA in Mathematics at Madras (1947). Lecturer in Madikeri College (1953-63) was his first appointment. After a three-year stint in Government College in Bangalore he came to Mysore in 1969 to settle down. He was absolutely simple in his dress, wearing white pant and bush shirt and chappals, going on a cycle or by walk wherever he had to go but equally forthright in speaking his mind out. He was a role model to some of us who were much younger to him.

GTN took the mantle of collecting funds for the construction of Veene Seshanna Bhavana on Adichunchanagiri road. His slogan was ‘Jagannatha’s Rath has to be drawn by all’ and  believed in ‘No great work has ever suffered for want of funds.’ He never hesitated to ask any stranger for funds and he even carried a receipt book in his bag to give it readily. His involvement was so much as he did not spare some of the shop owners on Sayyaji Rao and Dhanvanthri Roads.

I fondly remember him barging into my clinic even during busy hours just to tell me a ‘vismaya’ (miracle in his words) that he collected a few hundred rupees. The major donation of Rs. 1 lakh he got was from Dr. Veerendra Heggade of Dharmasthala who was his student in a Bangalore College.

As the estimated cost of construction was Rs.12 lakh he had to make a couple of trips to Bombay. Once he was invited by the  Bombay University to deliver a lecture on Science subjects offering him the flight and hotel charges. He politely refused to accept it and travelled in Gandhi class and stayed for a few days in his friend’s house asking the organisers to make that amount as a donation to Ganabharathi!

His love for Karnatak music started while he was in  Madras and it continued till his end in 2008. His reviews on music were unbiased and forthright, sometimes quite open and critical too.

Ganabharathi on the occasion of Veene Seshanna Bhavan’s  Silver Jubilee in 2016 posthumously honoured GTN with a Silver Plaque which was received by his wife Lakshmi Devi Rao. It is also gratifying to note that a memorial music concert is instituted in his memory in Ganabharathi. His admirers have contributed handsomely to this fund.

Being an avid student of Science he always used to quote Einstein’s popular saying ‘Science without religion is lame and Religion without science is blind’. He has written several books on science including Nobel Laureates Einstein and Chandrashekar. One of his books in Kannada ‘Vijnanada Moolatatvagalu’ has won an award also.  After becoming the President of Ganabharathi in 2011, I am proud to say that I am following his footsteps in collecting funds for the development of the institution.

I would like to conclude with GTN’s yet another selfless service for a cause. With his intense commitment to the improvement of art and culture in Mysuru he had provided free of cost a place in his house for the noted Dance Master late Muralidhara Rao to conduct his classes.