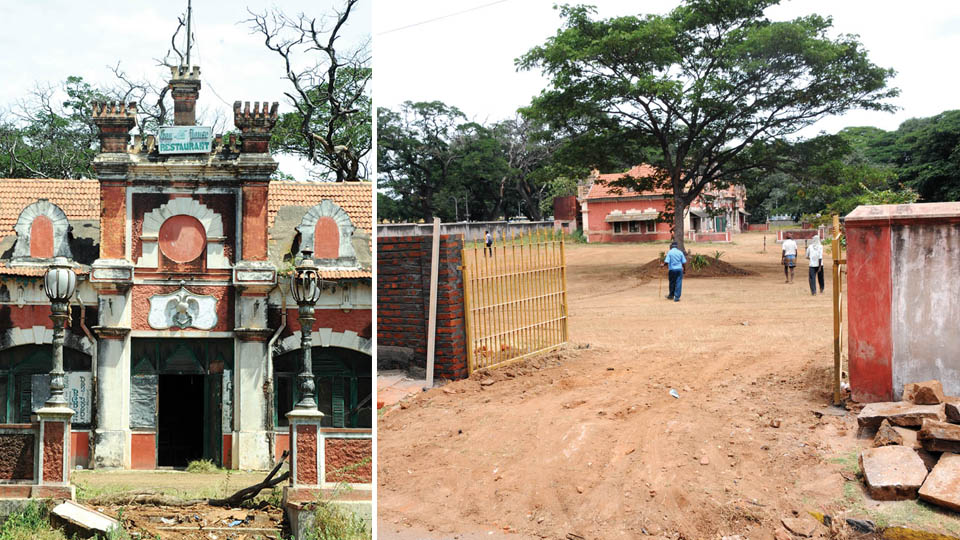 Mysuru: The more than a century-old Gun House which had been lying in a state of neglect with growth of thick weeds and vegetation for more than 32 years is springing back to life with the building once again going to house a hotel.

Yesterday morning the ground-breaking ceremony was performed at the Gun House, to install a gate. Cleaning of the nearly three-and-a-half acres has begun with the tractor-dozer.

Speaking to Star of Mysore this morning, the erstwhile royal family member Pramoda Devi Wadiyar said that the puja was performed in her absence (as she was away in Bengaluru), to install a gate.

Once the Jaganmohan Palace restoration work is over, the man power will be shifted to the Gun House. “Actually, it was just a shed with arches with no doors or windows. It was in the late 1970s that we decided to run a restaurant there and only then the windows and doors were fixed. Then we named it the Gun House Imperial Restaurant. It was one of the most popular dining places where excellent food was served. In fact we opened it after the Rajendra Vilas atop the Chamundi Hill in the early 1980s,” she said.

“The building did not have any access as the whole place was closed. Now it was decided to fix a gate for the vehicular movement. The whole place will be cleaned and the restoration work of the hotel will be taken up by the Wadiyar Heritage Centre,” she said.

“I intend to revive Gun House and take up maintenance works, repairs, renovation and refurbishment. The old kitchen, toilets and other facilities and amenities will be restored. I am just going about fulfilling my husband’s wishes as and when the circumstances permit. However, I cannot talk much about it right now,” she added.

The Gun House is listed as one of the more than 200 heritage properties in Mysuru. The sign board Gun House Restaurant still exists.