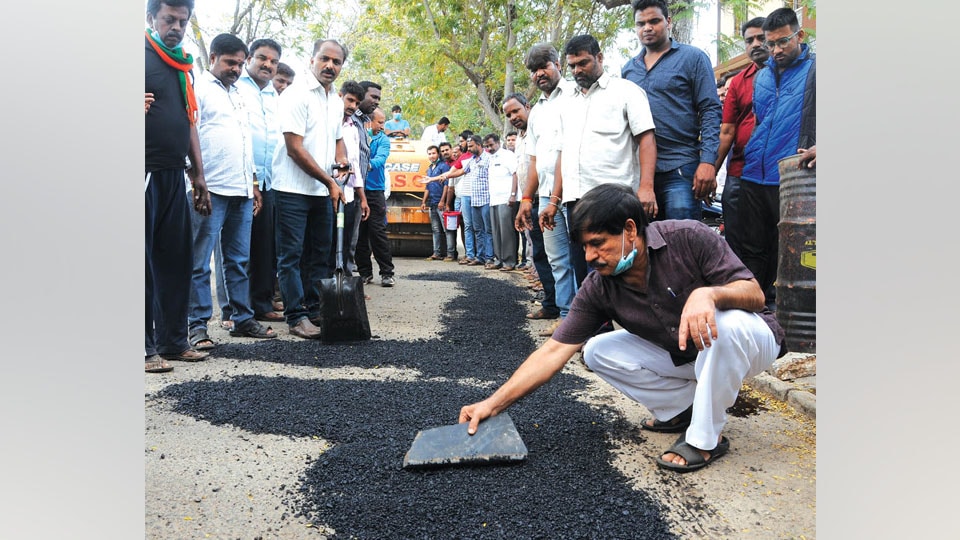 Mysuru: With scores of potholes left unattended in city inviting accidents, about 50 BJP members of K.R. Constituency led by former Minister S.A. Ramdas staged a novel protest in Vidyaranyapuram here this morning by filling the pot-holes themselves assisted by about ten workers.

Potholes on 400 metre stretch of Sarvajanika Hostel Road from Andani Circle to B. Basavalingappa Circle in Vidyaranyapuram were methodically filled with gravel and bitumen. A road roller was also used for the purpose along with a truck load of ingredients for asphalting.

Speaking on the occasion, Ramdas said that the expenses for today’s pothole filling were from donations collected from public as a mockery against the Government’s callousness towards civic amenities.

He recalled that the Government had announced an allocation of a meagre Rs. 3.8 crore in June for road repairs in city but regretted that nothing was released subsequently.

He said that potholes were the major reason for accidents in city. He ridiculed the Siddharamaiah Government in bestowing ‘Gundi Bhagya’ for city and hoped that today’s novel protest would open the eyes of MCC and the Government.