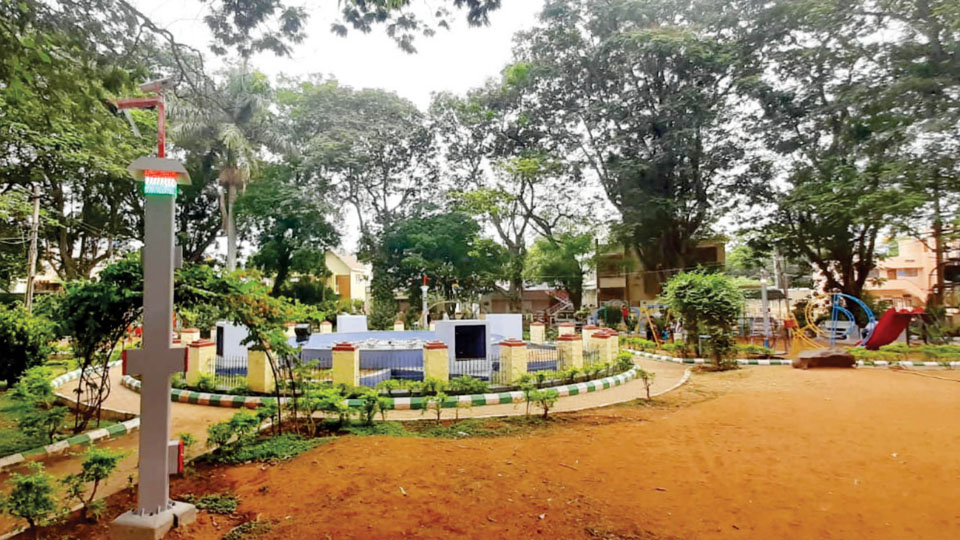 Colourful musical fountain, rows of trees, paved walking path and soothing music for ears. What more do you want to spend some time amidst nature?

This has been created as Mysuru’s first ‘Radio Park’ situated between 3rd and 4th Cross of 4th Main Road, Vidyaranyapuram. Being a first ‘Radio Park’ of city, it has become a favourite joint for local residents to spend some time in the morning and evening.

It will be formally inaugurated soon. Six main attractions of this park, which is locally known as ‘Haavina (Snake) Park,’  has been playing items for kids, colourful musical fountain, water cascading out of Shiva’s statue, open gymnasium and a place to chat. On top of it, solar lighting at a cost of Rs. 15 lakh, timer, CCTV camera, illumination beaming flags of India & State and good sound system (speakers at all the six poles).

Songs are played in radio from 6 am to 8.30 am and again from 5.30 pm to 8.30 pm daily. Apart from this, programmes of All India Radio and Private FM Channels are also played. Information pertaining to health is played on radio through pen drive. On Saturdays and Sundays, there will be ‘musical evening’ to attract local residents.

The whole area looks green with variety of trees. Two workers are appointed exclusively to keep the whole park neat and clean. The waste generated both inside and outside was cleaned two times a day. This park is being developed continuously for the last 10 years. Though it is a very small park, many people come every day. At least 100-150 two-wheelers are parked on both sides of the park. However, the number of people coming to park has reduced considerably due to COVID-19 scare.

The musical fountain is operated two days in a week and it is really a feast for the eyes. Listening to music as we walk amidst greenery gives a soothing effect to heart, said Subramanya, a local resident.

“People’s encouragement and co-operation enthused me to take up such developmental works in my Ward. I have been elected for the third consecutive time. This park has become a favourite spot for people of all ages. Wanting to do something unique, I planned to develop this ‘Snake Park’ as ‘Radio Park.’ Residents are very much happy with this park. Apart from playing music, pre-recorded messages on health and COVID-19 precautions, will also be broadcast’. — M.V. Ramprasad, Corporator, Ward No. 55