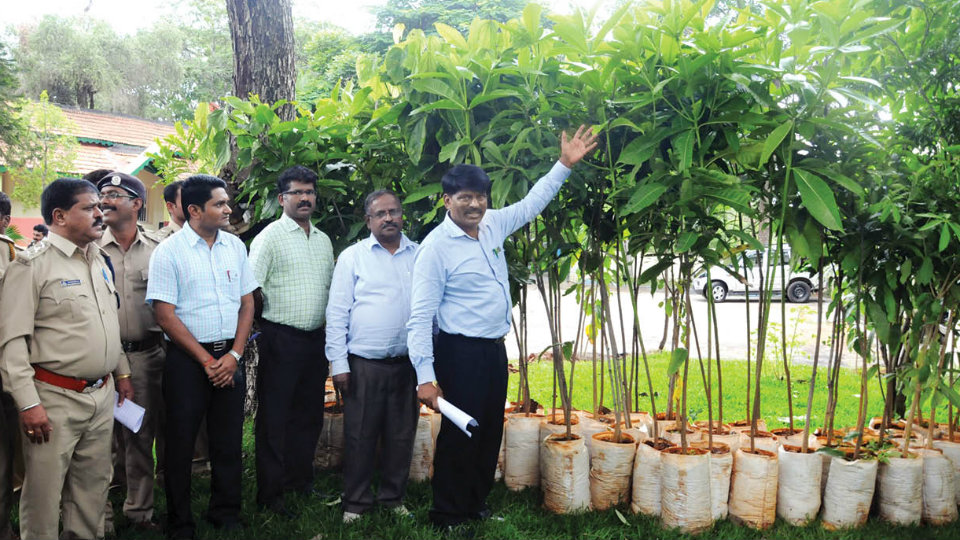 Mysuru:  The Karnataka Government with the aim to increase forest cover in the State has launched ‘Hasiru Karnataka’ initiative with the slogans ‘Manegondu mara, Oorigondu thopu, Talukigondu kiru aranya, Jillegondu vana’ (A tree for every house, A grove for every town, A mini forest for every taluk and A forest for every district).

As part of this initiative to restore the ecological balance, the planting of saplings in different parts of the district has been organised by the Forest Department and the District Administration from Aug.15 to 18, said Mysuru Division Chief Conservator of Forests S.S. Venkatesan.

He was addressing a press conference at Aranya Bhavan in Ashokapuram here yesterday and said that after the Independence Day function tomorrow at the Torch Light Parade Grounds in Bannimantap, the District in-charge Minister G.T. Devegowda will launch the programme by watering the saplings and releasing green balloons carrying Karnataka’s name.

The Forest Survey of India indicated that green cover in Karnataka should be 33 per cent whereas it is now 22.56 per cent. Chief Minister H.D. Kumaraswamy has announced ‘Hasiru Karnataka’ in the light of good monsoon and increase in groundwater resource, he said.

The District Administration and the Forest Department together will be planting saplings in dry hillocks, Gomalas, Government lands, Government Department Office premises, schools and colleges, farmers’ lands and in compounds of houses and  the seed ball planting alongside has also been planned. The students, volunteers and the public can participate in this programme, he said.

Mysuru Division Deputy Conservator of Forests Dr. K.T. Hanumanthappa said that there is a demand from all the government offices in the city for 1,000 saplings. The Department will check as to how many pits in the Government Office premises have been dug and accordingly the saplings will be distributed.

Nearly 50 varieties including 12 feet tall jackfruit, mango, jamoon, cotton, banyan, honne, teak, ebony, white cedar and other saplings in four to six feet in height will be planted, he added.