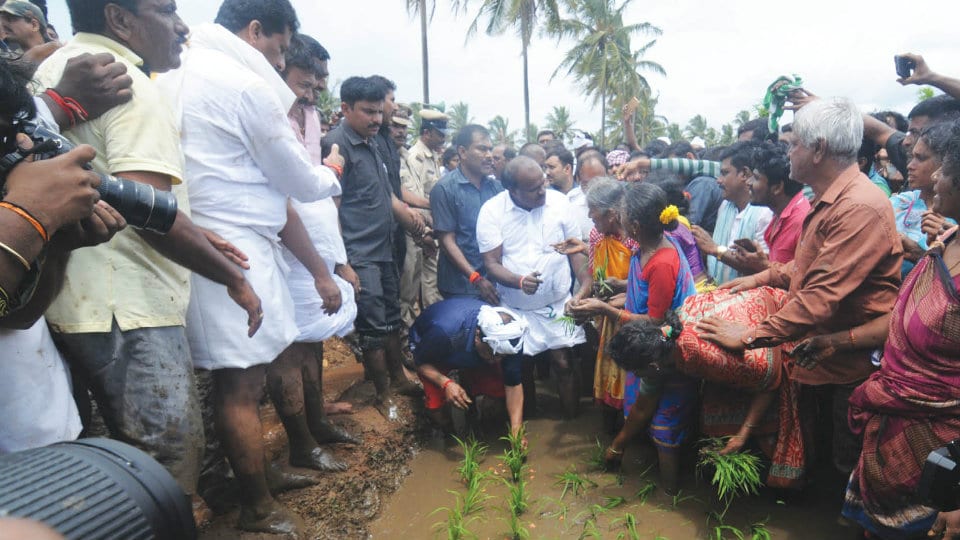 HDK turns farmer for a day

Mysuru: Amid much hype and hoopla, Chief Minister H.D. Kumaraswamy on Saturday sought to refurbish his image as the ‘son of the soil’  by transplanting young paddy stalks in the slushy paddy fields at Seethapura in Pandavapura taluk of Mandya district, a stronghold of JD(S).

Kumaraswamy who came in a traditional dhoti and a white shirt, was welcomed by folk troupes playing drums as they lined up along the irrigation canal close to the village, decked up with painted bullock carts and colourful flags that gave the location a cinema-set look.

Though he arrived late by three hours, folk artistes and light music singers kept the big crowd entertained on a cloudy day.

Kumaraswamy drove to Anjaneyaswamy Temple by the River Cauvery flowing close to the village and offered puja on Bheemana Amavasye day, before proceeding to the paddy fields, with JD(S) legislators, party workers and farmers.

Kumaraswamy transplanted a few paddy stalks along with a group of nearly 150 women and over 40 men labourers. Also, 12 pairs of oxen were used to plough the fields and transplant the paddy stalks. 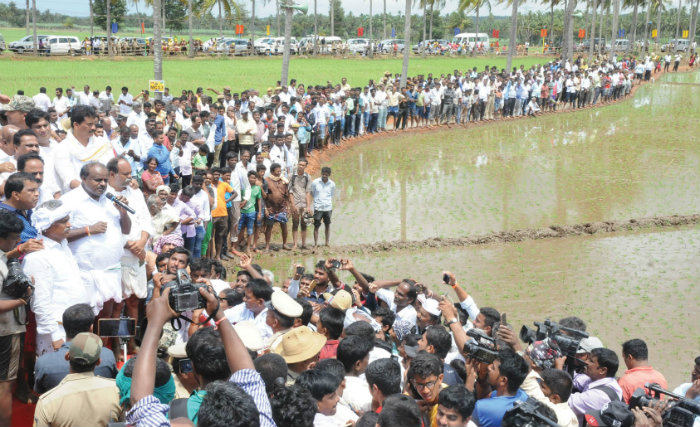 The usually sleepy village Seethapura was a beehive of activity following the visit of CM Kumaraswamy yesterday. The CM is seen addressing the villagers after transplanting young paddy stalks along with the farmers at the village.

Later, addressing the gathering, he said that he was there to understand the plight of farmers and offer them solutions, so they do not take the extreme step of committing suicide.

Pointing out that he will not rest until the farmers become debt-free, he said that his aim was to fill the lives of farmers with joy.

Announcing that the State Cabinet has decided to waive off Rs. 9,600 crore loans availed by the farmers in Co-operative Banks, Kumaraswamy gave a hint that farm loans taken from Commercial Banks too would soon be waived off.

Continuing, he said that he would launch a programme under which he will spend one day in a month with farmers in all districts.

Hinting that his Government would give ‘Good news’ to the people by Ganesha Chaurthi festival, the CM sought some time to solve the problems of farmers and all citizens in general.

Reiterating his appeal to farmers not to commit suicide, he ensured the revival of Mandya’s Mysugar Mill and Pandavapura Sugar factory.

The entire area was beautified and food was provided to the workers. Giant LED screens were erected and over 100 folk artists were used. Also, Hydraulic cranes were used to record the programme.

Ministers S.R. Mahesh and C.S. Puttaraju, JD(S) MLC K.T. Srikantegowda and other MLAs and MLCs from the region were present.

Kumaraswamy also laid the foundation stone for a new bridge across River Cauvery at Seethapura. The bridge will help villagers avoid taking a detour to reach Mysuru from Pandavapura.