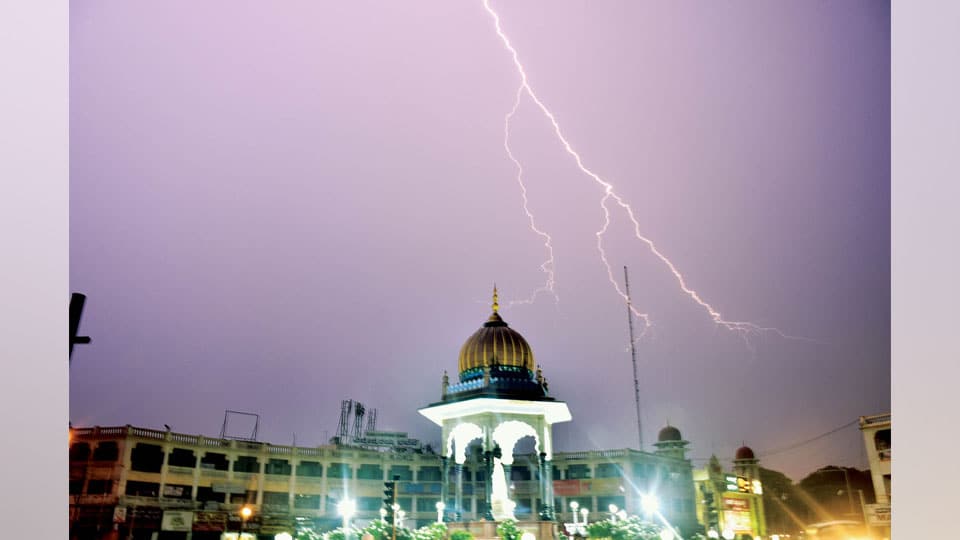 Respite from sweltering heat, but if rain stops temperature may soar

Mysuru: The long overdue welcome rains accompanied by gusty winds, thunder and lightning lashed the city last night. The temperature had soared in the last one-and-a-half months touching about 38 to 39 degrees Celsius.

The rains were expected during Ugadi festival but people were disappointed that it did not rain. However, just two days later it started raining bringing smiles on people’s faces even as the temperature cooled down.

The rain began around 8.30 pm accompanied by thunder, lightning and it rained heavily for more than one-and-a-half hours. As a result the branches of trees fell and in low lying areas water entered the houses. The power also went off which caused more problems.

The rains washed the rubble onto roads making driving difficult, especially for two-wheelers. Even roadside eateries and vendors were affected.

Trees fall in many places: Trees have fallen in parts of the city including in Javaregowda Park at Saraswathipuram, Hanumanthanagar Udayagiri. A branch has fallen on the electric pole in Siddiquinagar. Water has entered into homes in Subashnagar, Medar Block and other low lying areas causing problems to residents.

Rainwater was seen overflowing from manholes and open drains near Mahadevapura Layout Road in Hebbal and near Trinetra Circle and Reliance Mart (Discount World). The Under Ground Drainage was blocked and as a result water was overflowing from the manholes. The Mysuru City Corporation personnel were busy clearing the manholes and UGDs this morning.

Tree branches had fallen in Yadavagiri, Gokulam and Brindavan Extension where there is thick tree cover and the busy KRS Road was awashed with stones and mud covering, thus hindering traffic movements.

Many traffic signals in major junctions had stopped functioning due to power cuts and creating traffic chaos for office-goers. The CESC staff were seen repairing transformers and attending to fallen electricity poles.

In rural areas like Periyapatna and H.D. Kote, two coconut trees caught fire as lightning struck them. The snakes which get stuck in coconut trees during this period are unable to come down and they end up being burnt when coconut trees catch fire, said a villager speaking to SOM.

The Maharaja’s College Grounds is fully ready to receive Prime Minister Narendra Modi, who is arriving in the city today. However, due to heavy rains last night the venue was flooded with water and caused inconvenience to the organisers. But the temporary covering of most of the areas where seating arrangements has been done is so good that the chairs were not affected. However, the carpets laid had become a bit wet.

The Police and the workers already involved in the work had to take shelter under the shamiana. There  was water-logging near the check posts put up for elections which affected the operations, it is said. However, no untoward incident was reported due to heavy rains. This welcome shower has no doubt brought a sigh of relief for the people. But in the coming days if it does not rain then the temperature is going to go up again causing problems to the people. They have also to be wary of communicable diseases.

Meanwhile, the Meteorological Department has predicted more rains in the next four to five days. In Mysuru there is likely to be light to moderate rainfall accompanied by thunderstorm starting around 8.30 pm on all the four days.