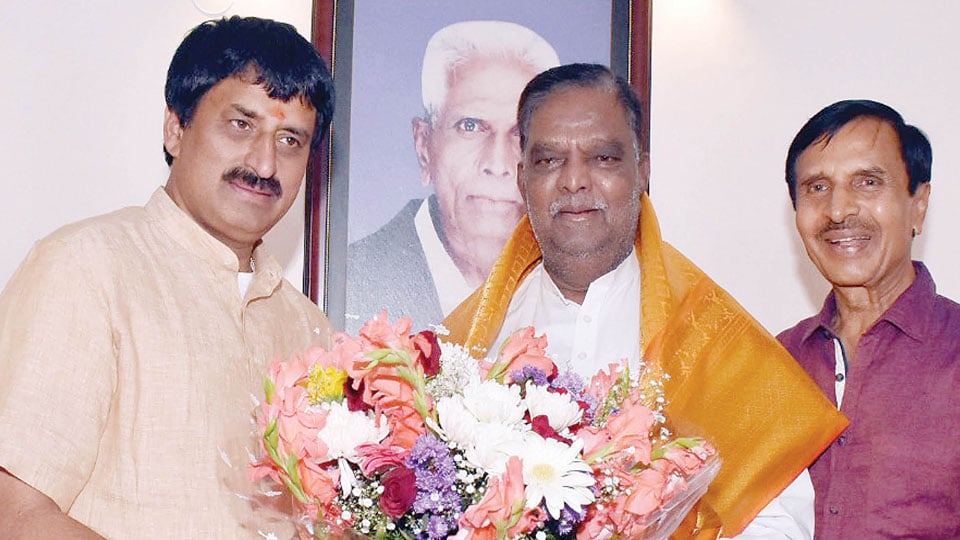 He was speaking to presspersons at Columbia Asia Hospital Junction, on Mysuru-Bengaluru Highway where he was accorded a warm reception by BJP workers upon his arrival this morning. This was the first visit of Yogeeshwar to Mysuru after he became a Minister last month.

He contended that the Government is deliberating on the most viable  plans for boosting tourism sector, which touched  rock bottom following the outbreak of the COVID-19 pandemic in March last year.

Pointing out that by introducing heli rides at important tourist destinations the Government aims to attract both domestic and international tourists in large numbers, Yogeeshwar hoped that the launch of heli ride, coupled with introduction of other services will give a big thrust to tourism in Mysuru region.

When questioned whether the proposed Disneyland-like Project at KRS was shelved, Yogeeshwar said that the Project is still very much alive.

Noting that the pros and cons of the implementation of this Project is being thoroughly studied, he said though the Project was the brainchild of the previous JD(S)-Congress coalition Government, the present BJP Government will do what is best for the tourism industry, without considering which Government had launched what project.

Reiterating that this Project is still at the Department level, he said that he will take up the issue at the Government level once the indepth study of the Project is completed.

Replying to another query on hoteliers submitting a memorandum to the Government seeking Industry status, Yogeeshwar said that the Department has taken serious consideration of the memorandum.

Pointing out that hotels are currently classified under the commercial category, he said that the Government will take a decision on granting Industry status to the Hospitality sector considering the fact that Tourism Industry will get a big push by this measure.

Referring to high vehicle entry tax in the State, Yogeeshwar admitted that it had hit the tourism industry to some extent in Karnataka. He said that he would talk to the Chief Minister on introducing one-nation one-tax policy that envisages a uniform tax throughout the country.

Pointing out that the Government is planning to introduce vehicle entry tax on Kerala Model, he said that he has talked to the Chief Minister on making special budgetary allocation for Tourism and it is hoped that such an allocation will give the much needed  boost  for Tourism.

Do not trust JD(S)

Asserting that he was committed to build the BJP in old Mysuru region and thus put an end to the perception that the region is a JD(S) stronghold, the Minister said that he has spoken to the BJP high command on his plans to strengthen the party.

He further said that he has apprised the Party top brass on the dangers of allying with the JD(S) under any circumstances.

Referring to JD(S) leader and former CM H.D. Kumaraswamy’s repeated jibes targeting him, Yogeeshwar said that such personal attacks are not good in politics.

Asserting that HDK has continued to make remarks against him despite the fact that he (Yogeeshwar) had sent a couple of his followers to appeal the ex-CM against making personal attacks, Yogeeshwar rubbished the claims of  HDK that the Minister was making money out of Irrigation pipe supplies.

He also dismissed HDK’s charges that he is a Minister who uses Letterhead to seek money from officials, as utterly false and baseless.

Earlier, Yogeeshwar, who arrived on a two-day whirlwind tour of the city,was given a rousing reception by BJP workers.

Yogeeshwar, who has a busy schedule, later went to Chamundi Hill, where he offered prayers to the deity. Thereafter, he visited the BJP office in Chamundipuram, from where he went to Madhava Krupa, the city RSS office and drove to the residence of  senior party leader and Chamarajanagar MP V. Sreenivasa Prasad  at Jayalakshmipuram.

The Minister is scheduled to take part in the all-important Connect-2021, an interactive session with Tourism Industry stakeholders, jointly organised by Department of Tourism and Karnataka Tourism Society at Hotel Radisson Blu at 5.30 pm.

After taking part in many other official engagements and attending private functions, the Minister will stay overnight at Hotel Lalitha Mahal.

Tomorrow (Mar.3), Yogeeshwar will hold a meeting with Tourism Department officials at the DC’s Office at 10.30 am, following which he will take part in the KSSIA conference at a Hotel on New Sayyaji Rao road at 12.30 pm and thereafter attend a private function. The Minister, after completing all his other engagements for the day, will leave for Bengaluru at 6.30 pm.