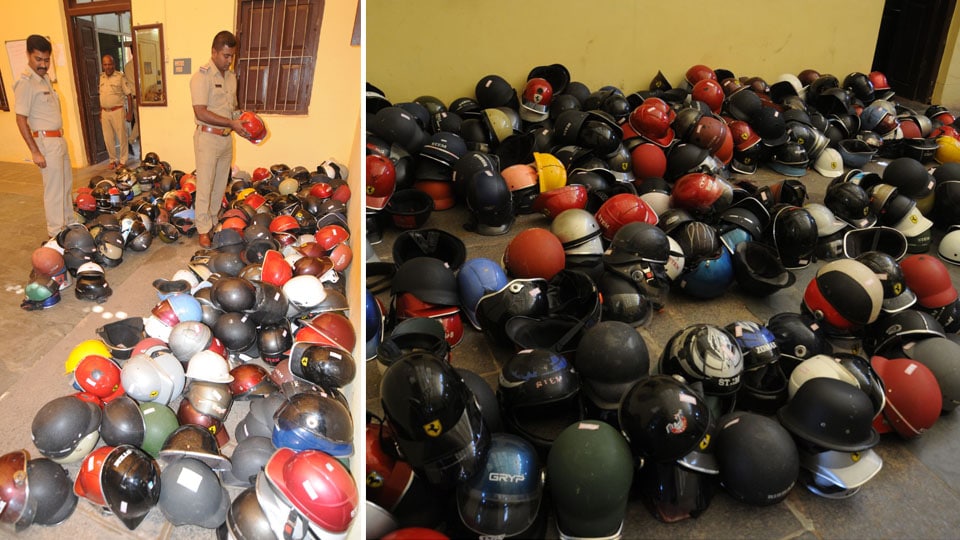 Mysuru: The City Police who had launched a crackdown on motorists wearing sub-standard helmets yesterday intensified their drive this morning and imposed a fine of Rs. 100 for violations.

Yesterday, the Police seized over 15,501 helmets (from 9 am to 2 pm) that did not conform to Bureau of Indian Standards (BIS) and have kept them at various Traffic Police Stations in city.

“Yesterday’s drive – Operation Safe Ride – was to create awareness and from today, we are booking errant riders and pillion and are levying Rs. 100 fine as prescribed in the Central Motor Vehicles Act 1989,” said ACP (Traffic) K.N. Madaiah.

“We are seizing the non-ISI mark helmets on-the-spot and are also impounding vehicles. Vehicles are being released only after owners produce the receipts of the new helmet (that conforms to BIS standards) purchase,” he told Star of Mysore.

In today’s drive, Police personnel belonging to traffic and law and order were involved in the operation. Even Policemen and retired cops were not spared and their helmets were also seized, said Madaiah. He added that they were forced to carry out the drive after motorists were found wearing sub-standard helmets despite several awareness campaigns.

Police clarified that they have not seized the helmets, but taken them away to discipline the users and kept them at the respective Police Stations. The drive was planned keeping safety in mind, as most of the two-wheeler users who have died of head injuries wore non-ISI mark helmets. 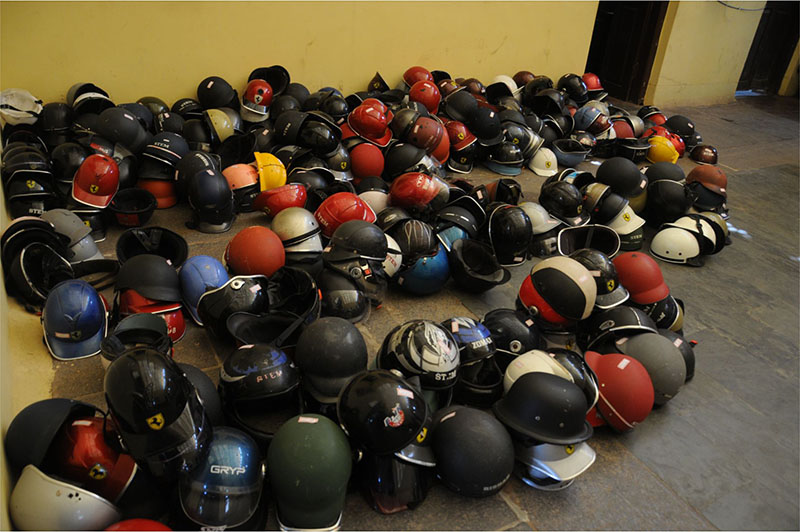 In every nook and corner of the city this morning, cops stood at junctions and caught motorists wearing non-ISI certified headgear and half-helmets. They seized the helmets and pasted the vehicle number and phone number of the motorists. “We will keep them for a month and will wait for the owners to produce the bills for good-quality helmets,” said Madaiah.

The crackdown also sent hundreds of motorists to shops selling helmets. Large crowds were found outside the shops with motorists eagerly buying helmets conforming to BIS standards as stipulated by the Central Motor Vehicles Act.

Star of Mysore visited over 30 shops selling helmets on the Chamaraja Double Road this morning and saw people queuing up to purchase ISI-marked head gears. Shopkeepers said that there was a spike in the sales, thanks to the ‘Operation Safe Ride’.

“On an average, we used to sell 15 to 20 helmets per day and since two months we were able to sell only four to five helmets a day. Since yesterday, we are selling 50 to 100 head gears per day and the demand is seen at all the shops,” said a dealer.

On the price factor, he said ISI-marked helmets are available from Rs. 400 to Rs. 3,000 and there is a huge demand for helmets ranging from Rs. 400 to Rs. 800. Several purchasers complained that shops have hiked prices that range from Rs. 50 to Rs. 150. “Traders are making money and we are the hapless victims,” a buyer said.

However, dealers said that they have not increased the prices. “All the ISI-marked helmets come with price tag and that includes Maximum Retail Price (MRP) and we cannot sell a rupee more than this. The Department of Legal Metrology (Department of Weights and Measures) will raid our shops if we sell more than the MRP,” another shopkeeper said.

Meanwhile, T.S. Srivatsa, member of BJP State Executive Committee, said that there is no consistent policy on helmets, even though of late, the rules have become stringent.

“Of late, most of the riders in Mysuru city have been adhering to the helmet rule. So, the collection of revenue to the Police department has reduced. Hence, they have taken the drive to the next level. Now, they are checking for another rule in the policy. Why did not the Police implement the ISI mark rule earlier? If it was insisted earlier itself, all riders would have purchased helmets with ISI mark only. Now, as most of them have bought sub-standard helmets, it is an unnecessary financial burden on the vehicle users,” he said.