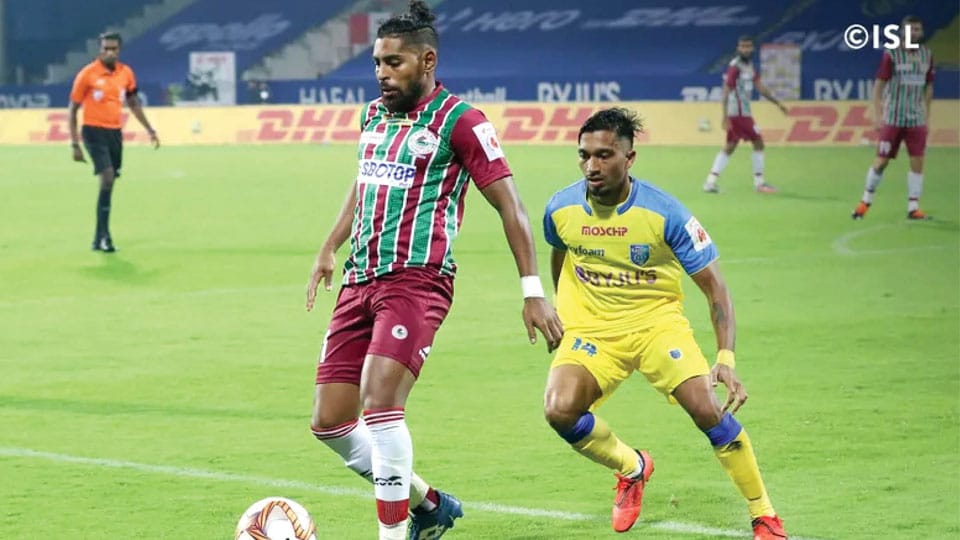 It was a tight contest with few chances that the Hero ISL debutants just about shaded.

In the opening period, ATKMB had a couple of opportunities to get an effort on goal from two corners. The first corner found its way to an unmarked Krishna towards the back post in the 4th minute but the Fijian striker couldn’t find a proper connection.

The second corner made its way to Carl McHugh’s head in the 26th minute only for the Irish midfielder to put his effort wide of the target. Krishna then had time and space to get a shot away from outside the box eight minutes later. However, like McHugh, he failed to test the Kerala goalkeeper.

Kerala’s Ritwik Das nearly got on the end of a cross from the left soon after but a lack of a proper connection with the ball meant that the teams went into the halftime interval goalless.

The Blasters also had the first opportunity of the second half when a Jessel Carneiro cross from the left took a deflection before making its way to Sahal Abdul Samad. Unfortunately for Kerala, Sahal ended up scuffing his shot as the ATKMB players breathed a sigh of relief.

Kerala continued to dominate possession but lacked cutting edge in the final third and were made to pay in the 67th minute. After some miscommunication among Kerala’s defenders near their own penalty area, Krishna reacted quickly to pounce on a loose ball and produced a controlled left-footed finish to score the first goal of the season and give ATKMB the lead.

Kerala pushed forward in search of an equaliser after falling behind and that in turn led to plenty of open spaces for the Kolkata giants to exploit. Edu Garcia almost made the most of these open spaces 10 minutes from fulltime when he struck a ball from outside the box, but the Spaniard dragged his attempt wide.

The Blasters, though, continued to push, looking for a leveller but ATK Mohun Bagan were up to the task, restricting Kerala to mostly efforts from range. Even though Kerala spent most of the four minutes of injury time in ATKMB’s half, they couldn’t quite fashion an opening as the Kolkata giants kick-started their campaign with a win.