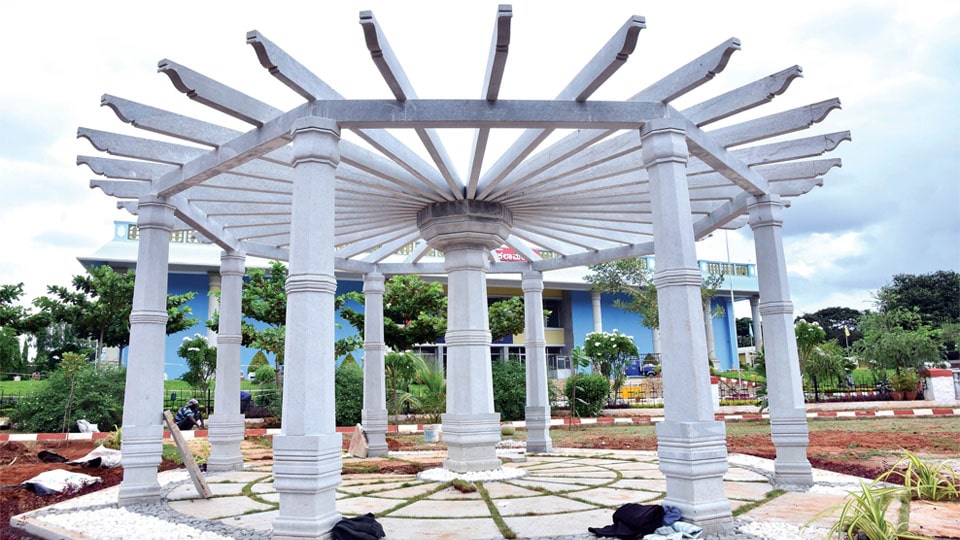 Yes, you heard it right. Soothing music will play as you enter the Kalamandira Garden and you can get lost in the musical notes amidst cool breeze if you choose to go there in the evenings.

The vast front arena of Kalamandira that already has Chinthana Chavadi, shaped like a well where people can have a 360-degree view of speakers and participants has a new addition — a beautiful heritage garden that adds to the existing list of iconic sections like Bhoomigeeta, Vanaranga, Sriranga, Kiru Rangamandira, Maneyangala and Dundu Kana.

The Garden at Kalamandira, where art is celebrated and worshipped, has been developed by Bank Note Paper Mill India Private Limited (BNPMIPL) at a cost of Rs. 41 lakh that was sanctioned from its Corporate Social Responsibility (CSR) funds. The Garden has been beautified stage by stage and initially, Rs. 20 lakh was thought to be the estimate but it touched Rs. 41 lakh as more and more features were added.

Speaking to Star of Mysore, Kannada and Culture Department Assistant Director Hanur Chennappa said that the Garden was built by BNPMIPL following a proposal from the Deputy Commissioner and it has been built in heritage fashion keeping in mind the heritage city concept.

Hexagonal stone Pergolas have been built to enhance the beauty of Kalamandira at the centre of the Garden and another one at the entrance. Below the Pergolas, Dry Garden concept has been implemented. Dry Garden is a garden that is designed to require little or no watering, typically containing ornamental rocks and stones or plants which thrive in dry.

The Garden has been beautified to have an aesthetic look with Sadarahalli stones. There is a fountain where water will spill over from the hoses constantly. “The fountain will be given a rubber coat so that water can be retained round the year and to prevent algae deposits,” he said.

Fourteen stone pedestal lamps have been installed and as one enters the Garden, soothing music will play. “We aim to take the visitor to a different world. After a day’s hard work, art-lovers can come to this abode to unwind and amidst cool breeze they can listen to music. Loudspeakers are being installed for the music to play and the songs will reflect the art, culture and heritage of the land,” Chennappa explained.

The sprawling seven-acre campus is neatly maintained and the Kalamandira frontage has now got a facelift with a heritage garden. Five caparisoned elephant sculptures will come up inside the Garden to further enhance its beauty. All the works have been implemented by Nirmithi Kendra, a Government Agency. The uneven walkway near the parking lot has been levelled and interlocking tiles have been laid.

Interestingly, historical inscriptions of various periods where Karnataka was ruled by kings and chieftains will be laid inside the Garden. These inscriptions will be procured from various archaeological sites of Karnataka. This move will further embellish the Garden, giving it a real heritage value.

In the second phase of works, the upgradation of toilets will be taken up and the works on Kalamandira auditorium will be initiated. “These works include installation of Air-Conditioners inside the Hall. As it is a big hall, an AC of good quality must be installed. Earlier, one AC was installed using JnNURM grants but it is defunct now,” Chennappa added.

A proposal has been sent to BNPMIPL requesting for CSR funds for the second phase of the work. “The detailed estimate will be prepared and Nirmithi Kendra will be implementing the works in the second phase too and there will be no involvement of private agencies,” he said.

A brainchild of  R. Gundu Rao

For the record, Kalamandira is a brainchild of former Chief Minister late R. Gundu Rao. Gundu Rao, who had studied in Mysuru and had a great affinity for the place had a dream that all cultural activities must happen here including dance, drama, art shows and  Karnataka Kalamandira today is living up to his dreams.

But when the building was being constructed, there was stiff opposition from many intellectuals in Mysuru as they felt that the serene atmosphere of Kukkarahalli Lake would be destroyed. However, Gundu Rao sanctioned the land for the project and it was completed in 1985 when Ramakrishna Hegde was the Chief Minister.

Earlier, Kalamandira was under the supervision of Karnataka Exhibition Authority (KEA) and it was handed over to the Kannada and Culture Department on 15.12.1989. The Department is maintaining Kalamandira since then.

The beautified Kalamandira and its ornate gardens, interlocking system, park pathway and Pergolas will be inaugurated on Monday, July 15 (tomorrow) at 5 pm by Director, Kannada and Culture Directorate K.M. Janaki.